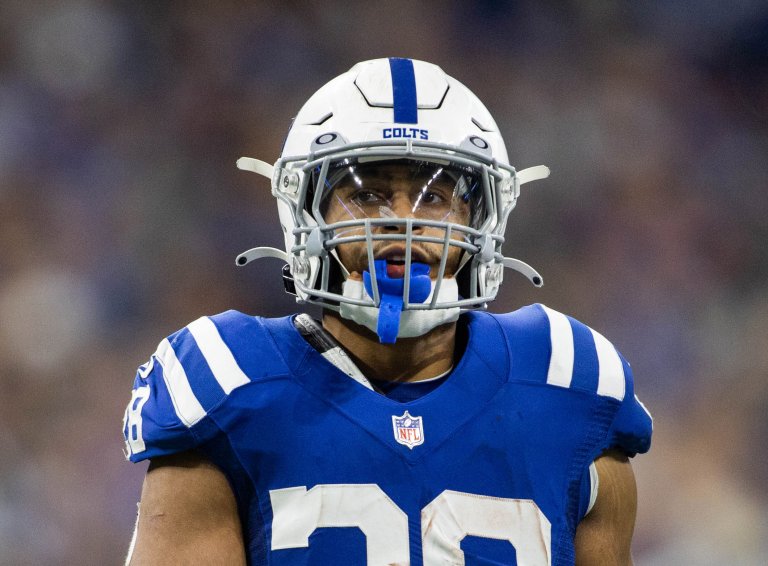 The oddsmakers are sticking with the tried and true formula when it comes to projecting who will be the leader in NFL rushing touchdowns this season.

Jonathan Taylor is the +450 favorite in this betting prop. The Indianapolis Colts running back topped all runners last season, rushing for a league-leading 18 touchdowns.

Next at a betting line of +650 is Derrick Henry from the Tennessee Titans. He was the 2020 leader with 17 rushing touchdowns.

At +900, Cincinnati Bengals back Joe Mixon is the only other NFL runner given odds that are shorter than +1000.

At an NFL betting line of +450, Taylor is given an implied probability of 18.18%. Bet $10 on Taylor and if the Colts back is rushing for the most touchdowns in the NFL this season, the payout will be $55.00.

Is Jonathan Taylor-Made to Repeat?

In most cases when it comes to NFL skill position props, betting a player to come up with a repeat performance will only lead to sorrow. However, that’s certainly not the case when it comes to rushing touchdowns leaders.

Matt Ryan’s press conference got drowned out at one point by kids screaming for Jonathan Taylor autographs.

It’s 2022, and the Colts just traded for an MVP QB, but a running back is still the superstar of their offense.

That being the case, is Taylor worth a look to come through for the second year in a row? Well, as a matter of fact, yes he is.

Adding veteran passer Matt Ryan to run the Indianapolis offense should open up the Colts’ attack. If Ryan gets the ball moving through the air like he’s capable of doing, there could be ample opportunity for Taylor to run to daylight – and to the house – during the 2022-23 season.

Henry Looking to Bounce Back

After successive spectacular seasons, a foot injury punted Henry to the sideline for much of last season. He’ll be seeking a big comeback season.

That means in your NFL future bets, Henry just might be a solid play in NFL CPOY odds. However, banking on him to return to his championship form in pursuit of the rushing touchdowns title could prove foolhardy.

While eight players since 1996 have managed to assemble two titles when it comes to the NFL rushing touchdowns crown, Hall of Famer LaDainian Tomlinson is the only player to earn a trio of seasons in the lead.

Derrick Henry is willing to put the team on his back. 😤 pic.twitter.com/jimQOfkQOO

Minus AJ Brown as a receiving target for Titans QB Ryan Tannehill, it’s going to be even tougher to move the ball and get into red zone opportunities. That figures to limit Henry’s chances at the end zone.

Can These Guys Stay Healthy?

There’s a trio of value bets who could enter your NFL betting strategies if they can stay on the field long enough to find the end zone.

Nick Chubb was second in the NFL in rushing last season with 1,259 yards. The Cleveland Browns back also has eight rushing touchdowns in 14 years. In 2020, Chubb ran for 12 TDs in 12 games.

Feel like Dalvin Cook doesn’t always get the respect he deserves 💨 pic.twitter.com/vBRiPs6a5l

Minnesota’s Dalvin Cook has never played more than 14 games in a single season. But he’s had rushing touchdown seasons of 13 (2019) and 16 (2020) in recent years. Imagine what he might be capable of scoring were he healthy for all 17 games?

There’s intrigue in what the New York Giants offense might look like under offensive guru Brian Daboll. That could mean ample opportunities for success coming to 2018 NFL rookie of the year Saquon Barkley should he stay away from ailments. Barkley scored 11 rushing touchdowns while playing all 16 games in 2018. He’s missed 21 games over the three seasons since.

The combination of Taylor’s spectacular lateral movement, Indy’s dominant offensive line and Ryan’s adeptness at running play action will make Taylor the most dangerous threat out of the backfield in the NFL. He’s going to be a legitimate contender in the NFL MVP odds.

Through his first 2 seasons in the NFL, Jonathan Taylor has averaged 1.03 TDs scored per game 🤯🤯🤯