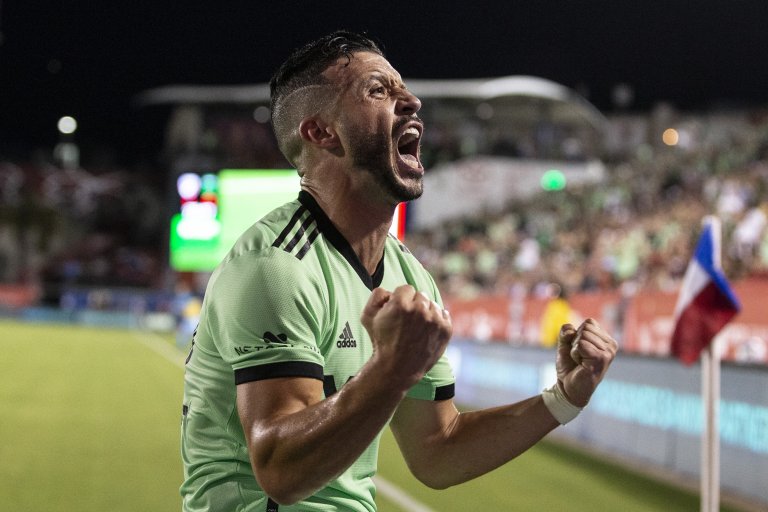 MLS Week 22 gets rolling on Saturday with a full slate of 12 matches to choose from. Sunday includes just two late games to fill out the 14-game card.

Read on for the Major League Soccer odds for every MLS Week 22 game, as well as our best MLS betting predictions.

Sporting enters this one off a 3-0 defeat at Real Salt Lake last weekend after being reduced to ten men. It’s now one win in five, two in nine and three in 17 for SKC.

SKC ranks dead-last (28th) in goals scored and xG, and 25th in goals allowed and xGA. They’re 25th in shots and 27th in shots on target.

LAFC is second in goals scored and third in xG. They’re third in shots and first in shots on target. After Gareth Bale made a brief 20-minute substitute appearance last week, he could be in line for a larger role in MLS Week 22.

This is a lost season in MLS for Sporting. But as bad as they’ve been in the league, they do find themselves in the semifinals of the US Open Cup with a real chance of lifting a trophy this year. They play USL side Sacramento next Wednesday. It’s likely Peter Vermes uses some rotation in his lineup for this game against LAFC. I wouldn’t expect an SKC win with a full lineup, much less with a possibly rotated one.

This MLS Week 22 matchup almost looks too easy to call. Could it be a trap? Perhaps. But it’s hard to come up with too many reasons why LAFC can’t and won’t win this game. I grabbed LAFC at +137 odds earlier this week but you can still find +113 at Caesars Sportsbook.

It’s expansion side Charlotte FC who are having a much better season sitting in eighth place in the East heading into MLS Week 22. At 8-2-11 and 26 points, Charlotte is just one point out of the playoffs behind Cincinnati.

Charlotte lost 3-2 in Miami last week, but previously they beat Nashville 4-1 and Houston 2-1. The win in Houston is a key three points as it marked their first win on the road this season and in their short franchise history. They’re still 1-2-8 on the road and have been outscored by ten goals in those 11 games. So betting on a Charlotte road win still has major caution flags. You could see that lone win coming though as they had scored in four-straight road games prior to the Dynamo win. They’ve now scored six straight on the road and twice in each of their past two. Overall, both teams have scored in 8/11 Charlotte road games.

Against TFC, that trend could very likely continue. Toronto lost 1-0 in Montreal last week. They’ve now conceded in 29 straight and in 50/51 in MLS. Charlotte may be poor on the road, but they’re good enough to score on this porous TFC defense.

And while TFC have now been shut out three of four and are 0-1-4 in their past five, they have scored in 9/11 at BMO Field in Ontario. And they are welcoming reinforcements into the lineup. Mark-Anthony Kaye has already debuted. So too has Domenico Criscito from Genoa. Lorenzo Insigne from Napoli could debut if his calf injury permits it. Federico Bernardeschi from Juventus (the third new Italian addition) was introduced to the media this week.

Toronto isn’t going anywhere in the league this season though. But they do play in the Canadian Championship Final on Tuesday in Vancouver. There’s actual silverware on the line in that game and a chance to earn a spot in next year’s CONCACAF Champion’s League. So it’s unlikely any of these new additions will be pushed too hard on Saturday.

What it all boils down to is I don’t trust either of these teams to keep a clean sheet, but both are just good enough to get a goal. Or poor enough to concede.

DraftKings Promo Code: Bet $5, Get $150 if Either Team Scores a Run During Phillies vs Cubs

These teams already played once this season in New England in May and drew 2-2. Last year they drew 1-1 in New England, 2-2 in Columbus and the Revs won the first meeting 1-0 at home.

The Crew are one of the hottest teams in MLS entering MLS Week 22 at 4-4-2 in their past ten. They’re undefeated in eight games and new DP club-record signing Cucho Hernandez has made an immediate impact. He has four goals in three games and has instantly formed a partnership with Lucas Zelarayan.

With a goal in the 16th minute tonight, the @ColumbusCrew’s Juan “Cucho” Hernández became the first player in @MLS history to score his first four goals in under 90 minutes of game action. pic.twitter.com/awFW1GyLGZ

The Revs arrow is pointing in the opposite direction atter back-to-back losses have now made them winless in four. Defense is the issue for Bruce Arena’s side. Only six teams have conceded more goals this year than New England’s 34. They’ve allowed eight in their past three but have also scored six times in those three games. Overall, they’ve scored in all but two matches this season.

And more offense is on the way, as new DP striker Giacomo Vrioni arrived in New England earlier this month. Vrioni is an Albanian international and was loaned out by Juventus to WSG Tirol in the Austrian Bundesliga where he tied for the league lead in goals last season with 19.

The Crew are rolling right now and have kept clean sheets in their past two home matches. But the Revs with Carles Gil, Gustavo Bou and potentially Vrioni, will have the offense to contribute as well.

Here’s a two-game parlay from Houston vs Minnesota on Saturday and Austin vs New York on Sunday.

The Dynamo just snapped a four-game winless streak with a 2-1 win in San Jose last week with two goals in the final 20 minutes to complete a comeback win. They only have two wins in eight but they have been scoring. They’ve scored in eight of nine overall and in 8/11 at home this season. Hector Herrera brings a new dimension to this team and playing at home in the Houston heat is always an advantage for the home team.

The Loons are one of the hottest teams in MLS at 4-1-0 in their past five. They just smashed Premier League side Everton 4-0 in a friendly on Wednesday. However, star midfielder Emanuel Reynoso left the game with an ankle injury, but it’s said it was purely precautionary.

Despite the strong run of form for Adrian Heath’s side, outside of a 2-0 home clean sheet over a struggling DC side last week, they had failed to keep a clean sheet in any of their previous 12 matches. On the road, they’ve conceded in 9/10.

The Dynamo should find the scoresheet on Saturday in MLS Week 22.

Austin briefly held the lead in the Supporters’ Shield race last week before quickly giving it back to LAFC. They’re now second in the West and overall and will host the Red Bulls who are third in the East. The Red Bulls missed a chance to gain ground on their New York rivals NYCFC losing 1-0 at home last week.

It’s on the road though where the Red Bulls have shown this season, owning the second-best road record (behind Austin) at 6-2-3. They’ve scored 16 goals in those 11 games and Austin’s possession-based style (53.9-percent average vs NY at 44), will suit New York just fine. They’ve already defeated each of San Jose, Toronto, New England and Orlando who average over 50-percent possession. But, those wins all came April 24 and earlier. They have just one win in their past six on the road.

And Austin is a tough nut to crack at Q2 Stadium. They’re 5-3-1 at home and have scored 22 to just eight conceded. Overall they are now undefeated in seven at 5-2-0 after last week’s 1-1 draw with Dallas.

The team is preparing for a busy week of matches, starting with their first meeting against Austin FC on Sunday.

Hear what we had to say.#ATXvRBNY | #RBNY

The Red Bulls have an important US Open Cup match to prepare for next Wednesday in Orlando. A win sends them into the final, which means this out-of-conference MLS Week 22 match with Austin may not be as high of a priority.

An Austin home win looks quite tempting at plus-odds, but you can also look to another of the ways to bet on soccer by betting Austin on the “double chance” to win or draw the game.