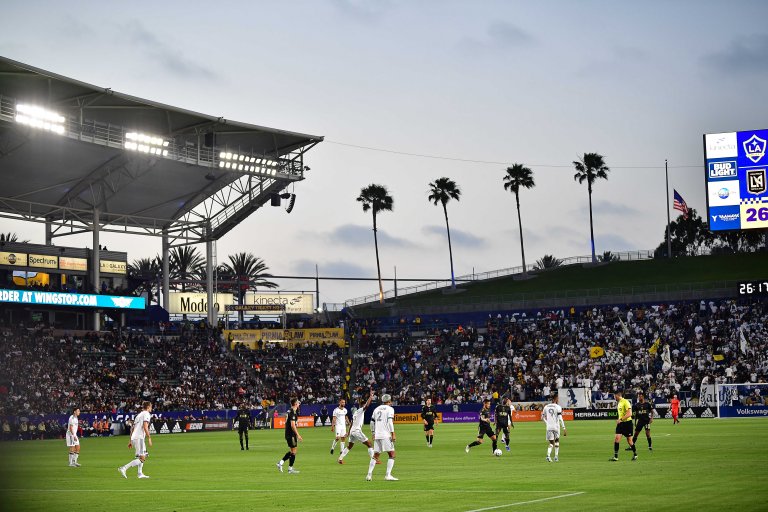 MLS Week 19 kicks off on Friday with three matches, including the biggest of the weekend with LAFC vs LA Galaxy in El Trafico. Ten more matches fill a full card on Saturday including tons of key rivalry matches.

With the summer transfer window now open, check the lineups for the possible additions of several new stars entering the league who could make their debuts.

Read on for the MLS odds for every MLS Week 19 game, as well as our best MLS betting predictions.

When MLS Week 19 kicks off on Friday. it does so with one of the biggest matches and rivalries of the year. El Trafico, featuring both Los Angeles-based teams rarely lets anyone down. And in recent memory, it rarely lets down fans and bettors of the more accomplished LA Galaxy.

The Galaxy have not lost to their local rivals in the past five head-to-heads. This year alone, the Galaxy won 2-1 at home in league play back in April, and then 3-1 in May in the US Open Cup. They are 3-2-0 since LAFC won at home back in 2020. Playing at home should be an advantage for LAFC, as a road team has only won once in this rivalry over 15 meetings.

“We are excited, we are ready to win this game.”

The teams are coming off very different recent showings. LAFC last played on Saturday night, in Vancouver losing 1-0, with the winner coming in the 89′ minute. It was just the second time this season LAFC has been held off the scoresheet. Playing at home, as they will be in this match, they haven’t failed to score in 35 matches.

That last losing result did come without Carlos Vela who was rested. Vela should be back on Friday. And LAFC could also feature, albeit likely off the bench, should head coach Steve Cherundolo choose, Giorgio Chiellini a major recent transfer acquisitions. Gareth Bale just arrived in LA on Friday and is unlikely to feature.

The Galaxy enters this MLS Week 19 El Trafico matchup fresh off a July 4th thrashing of CF Montreal on Monday. Chicharito struck early in the 8th minute and LA never looked back leading 2-0 at the half and 3-0 within the hour. Dejan Joveljic also scored, his fifth goal in his last five games. The Galaxy, despite just one win in their previous six matches entering Monday, now finds itself fourth in the Western Conference. They’ll be happy to finish a five-game home stand with a win, but collecting just seven of a possible 15 points during the stretch will be a letdown for head coach Greg Vanney.

The newest member of the ???

LAFC leads the MLS Cup odds, owns the top home record in MLS and has scored over two goals per game (23 in 10) at Banc of California Stadium. They’ve scored in 35 straight home games as well. No matter how much time Chiellini and/or Bale play, it will be a party atmosphere at the Banc and LAFC won’t fall to their rivals for a third-straight time.

It’s the champs off to a better start in 2022, sitting in fourth with 29 points, compared to seventh and 25 points for the Revs. However, it’s New England who enters this one in better form.

The race for the MLS golden boot is on! ? pic.twitter.com/P8WpknhoaC

The Revs’ 2-2 draw with FC Cincinnati last week extends their undefeated streak to ten matches. They’ve scored in nine of those ten, scored multiple goals in seven, but also conceded in eight.

NYCFC enters this one with just one loss in 12, but they’ve failed to collect all three points in any of the last four—drawing 2-2 last week with Atlanta, which followed a 4-4 draw (CIN), 2-1 loss (PHI), and 1-1 draw (COL). The Pigeons’ defense has been leaky of late, but they’ve scored in 11/12, and Taty Castellanos sits tied in for the lead in the Golden Boot with 10 goals.

There’s little between these sides right now but both should score.

These teams have been an Over bettors’ dream this season. Heading into MLS Week 19 Austin is the highest-rated Over team in the West at 12-6 overall. They’re also the highest rated on the road at 7-3.

Atlanta is even higher at 13-4 overall and 6-2 at home. Only four teams’ play in games that average more goals per game than Atlanta’s 3.4 and Austin’s 3.3.

Take a look down the MLS Golden Boot race and you won’t have to look far to see Austin’s Sebastian Driussi tied in first overall on ten goals. Max Urruti isn’t far behind with six. Atlanta United strikers may not sit near the top of the race, but they have plenty of firepower themselves. Josef Martinez leads with five goals, followed by each of Luiz Araujo, Ronaldo Cisneros, and Dom Dwyer with four.

Came on with 6 minutes left..

After falling behind 2-0 in Colorado last week, Austin roared back to win 3-2. They’re undefeated in four, have scored in all but two games this season, and are the league’s second-leading scorers behind LAFC.

Atlanta’s form isn’t as strong as after drawing 2-2 last week they have just one win in seven. But they’ve scored in each of their past ten games and in all but three this season. This one looks like a goal-fest and one of the ways to bet on soccer is to combine both teams scoring with the Over.

It’s another big matchup for Heineken Rivalry week as these Cascadia rivals meet up at 4:30 pm EST Saturday in MLS Week 19.

Seattle has been without star striker Raul Ruidiaz the last few games and fielded a rotated lineup last week but still went into Toronto and won 2-0. They’re 4-1-1 in their past six and have scored 17 goals in their nine matches at Lumen Field.

The Timbers have been poor away from Providence Park this season going 1-5-4 so far. But, they just drew Nashville 2-2 on the road last week and are undefeated in four games, scoring eight goals in that stretch. Jaroslaw Niezgoda, Bill Tuiloma, and Yimmi Chara are leading the charge offensively for Gio Savarese’s side with six, five, and four goals respectively.

No other player has a conversion rate better than 28%. Marksman. pic.twitter.com/haNIaWgVco

Surprisingly, it was three road wins last season, with Seattle winning 2-1 and 6-2 in Portland, and Portland winning 2-0 in Seattle. In fact the road team has dominated this rivalry in recent years.

As poor as Portland has been on the road, they have scored in each of their past five away from home. A win here would also draw them level on 26 points with Seattle for the final playoff spot in the West. Let’s back goals from each side here as well.

We’ve had a few selections at shorter odds, so let’s combine two games here into a parlay for some plus-money odds for MLS Week 19 Heineken Rivalry Week for our MLS betting tips.

There’s no point in going too in-depth here. Both of these teams are bad. And two bad teams together usually cause sloppy play and goals. Toronto has conceded 34 goals this season. San Jose 35. That’s 27th and 28th respectively. They’re no better in xGA, with the sides flopped, Toronto 28th (36.8) and San Jose 27th (31.8).

Toronto just lost to Seattle 2-0 last weekend. That makes it now 26 in a row without a clean sheet and 47/48. So … it’s likely they get scored on again in MLS Week 19. They’ll be weakened by the recent trade of Alejandro Pozuelo to Inter Miami. And new DP signing Lorenzo Insigne is reported to be out until at least July 23 with a calf injury. So his debut will be delayed. But San Jose has just two clean sheets themselves this season. So making the long trip to Toronto, Ontario against a TFC team still capable of scoring, I see both teams scoring (-180) in this one. If you’re looking for a goalscorer prop, Jeremy Ebobisse of the Quakes with nine goals on the year looks the most likely at +190 odds.

It’s the second Texas Derby between these sides this season. Dallas won 2-1 at home in April. I don’t count pre-season for much, but FCD also won there this year as well by another 2-1 score in Dallas.

Last year the teams drew 1-1 in Dallas, 2-2 in Houston, and the Dynamo won the final meeting 3-2 in Houston. This is not the rivalry to go backing road teams with your money, unless you’re really brave. A road team has not won between these two in 16 league games dating back to 2016.

Ahead of Texas Derby #️⃣5️⃣0️⃣, let’s dive deep into the numbers ?#HoldItDown

Neither of these teams are coming into this MLS Week 19 match in the best of forms. Houston is 1-0-4 in their past five, being outscored 9-5. They’ve scored in four of those five. Meanwhile, Dallas hasn’t won in four, and have just one win in their past seven. Both teams have scored in seven of their past eight and in each of their past six on the road. There actually hasn’t been fewer than three goals scored in any of those six road games. With neither in great form, this looks like a game where both will find the scoresheet (-155).

Parlay Picks: Both teams to score in both matches (+156); 1 unit at Caesars Sportsbook