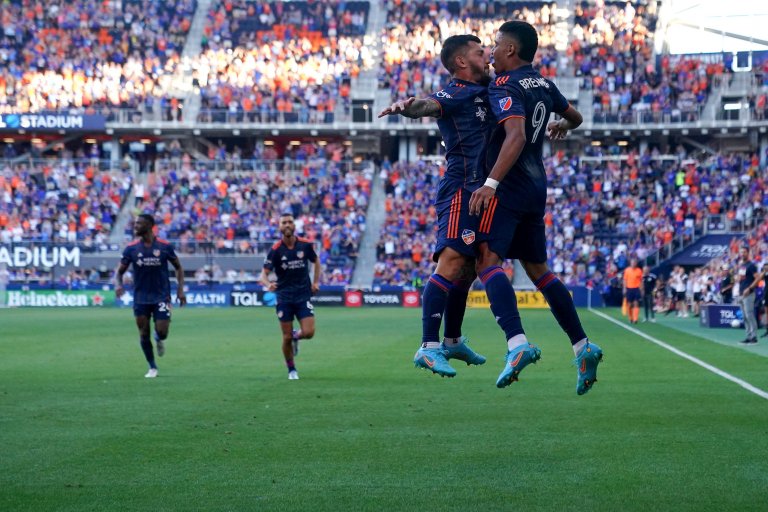 MLS Week 18 kicks off on Saturday with two matches as Toronto hosts Seattle and Vancouver hosts LAFC. Sunday is a full slate of eight matches, followed by four games kicking off on Monday night on the holiday.

A few teams will have the rest advantage this weekend as they were not involved in the midweek MLS Week 17 play or the US Open Cup. They include Vancouver, RSL, SKC, San Jose, DC, and Colorado.

Read on for the odds for every MLS Week 18 game, as well as our best MLS betting predictions.

There are many ways to bet on soccer from the odds above that list New York City FC, New England and FC Dallas as the biggest favorites of the weekend. If you enjoy betting the Over, look no further than Canada, where Montreal at 13-4 and Toronto at 12-5 are the highest-rated Over teams in the league. In the West, Vancouver is also 11-6 to the Over, while Austin leads the conference at 11-5.

The Philadelphia Union at 13-4 to Under are the most likely to play to tighter affairs.

Both these teams play to the Over on the season. New England is 11-6, while Cincinnati is 10-7. That trend has never been more evident than in their head-to-head matchups this season, of which there have been two.

First, they met in the US Open Cup in New England, where the Revs won 5-1 on May 11. Then, just ten days later they met in league play in Cincinnati, where New England again won 3-2.

The match, before, coming last season, was also a 4-1 Revs win. After losing their first-ever meeting with FCC in 2019, New England has now won the past five.

The Revs will be the more rested side in MLS Week 18, having not played since last Sunday’s 0-0 draw with Vancouver. That was their only scoreless draw on the season. Their previous seven all saw both teams scoring. Five of those seven also saw three or more goals scored. On the year as a whole, 13/17 Revs matches have seen both teams scoring.

FC Cincinnati is level on points with New England this season with 24 in the East. Take out Cincy’s horrendous past from your memory, and based on this season alone, they look like playoff contenders. They’re undefeated in three after Wednesday’s wild 4-4 draw with champions NYCFC. They’ve also only lost two of their past nine. With that four-goal outburst versus New York, they’ve now scored in ten straight.

Taking just one point from the champs in midweek play will actually be a letdown for FCC considering they were up 3-0 in the first half before conceding goals at 45′, 45+2′, and 45+7′ to enter half-time level 3-3. They then fell behind early in the second half before Brenner scored his third on the night in 70′ to draw the teams level at four.

• Brenner hat-trick
• NYCFC 3 goals in first half.. all coming in the 45th minute or later.. yes you’re reading that right
• 8 goals total in the first 70 minutes

Getting Brenner going, who now has four goals on the year, will make FCC’s attack more dangerous, to go alongside Brandon Vazquez (8 goals) and Luciano Acosta (6) who had previously been the main, almost only, driving forces.

This one has the makings of an Over with both teams scoring.

Miami is slowly improving this season. At least when they play at home, where they’re 5-2-2. On the road is a different story where they’re just 1-1-5 and have only scored three goals while conceding 13. Miami’s last four road matches have been 2-0, 1-0, and 2-0 losses, and a 0-0 draw. They should be boosted by a comeback win over Minnesota last weekend which saw substitute Indiana Vassilev score in the 87′ and 90′ minutes to secure an unlikely win after being down 1-0.

But that win was in Miami. They’ll be playing in one of the tougher MLS venues to collect a result when they visit Dallas in MLS Week 18 who are 5-1-2 at Toyota Stadium, where they’ve only allowed eight goals.

Set piece perfection to find the equalizer for @FCDallas! pic.twitter.com/vYKoPfz8Tq

Dallas lost Wednesday in Los Angeles and have actually dropped back-to-back home games and have just one win in their past five. But they haven’t lost three in a row at home since way back in 2011.

I’ll bet Jesus Ferreira and Paul Arriola will be too much for Inter Miami and Dallas gets back on track with a win.

There are two games on Saturday for MLS Week 18 and we’re combining some selections from each to form a two-game parlay.

Making a pick in this MLS Week 18 game is simple. While these two teams have regularly made it to the MLS Cup Final in recent memory, only one looks like they have the potential to return to the final this year. Seattle may have lost at home Wednesday at home to Montreal, 2-1, but they were undefeated in their previous four. They’re seventh in the West, have scored 24 goals and scored at least once in seven of eight.

Toronto also lost on Wednesday, 2-1 at home to Columbus. They’re 12th in the East and the 32 goals they’ve allowed are the worst in the conference. Allowing those two goals means TFC has now conceded in 25 straight games and in 46 of 47. If ain’t broke, don’t change it. Seattle to score a goal is going in this parlay.

LAFC leads the Supporters’ Shield race and are favorites in the MLS Cup odds. They played midweek, a 3-1 home win over Dallas. LAFC are now undefeated in five, have scored 35 goals on the season and have scored in 16/17 games this season.

Down in 11th in West, the Whitecaps aren’t off to as great a start. But they are 5-2-2 in their past nine and 4-3-1 at home. The Caps have scored in six of eight at BC Place and have only lost at home twice in their past 20.

The best of the west. @LAFC sit at the top of the table halfway through the regular season. pic.twitter.com/zNEBZTHdOa

Outside of an LAFC road win back in 2018, a road team has failed to win between these two sides in the past nine meetings. They met once earlier, this season in March, which resulted in a 3-1 home win for Los Angeles. Both teams have scored in each of their past five meetings. Three or more goals have been scored in four of those five.

LAFC should always be expected to score, but the Whitecaps, with no midweek game will be rested and play strong in Vancouver. I see both teams scoring here in MLS Week 18.

Parlay Picks: Seattle to score and Vancouver vs LAFC both teams to score (-112); 1 unit