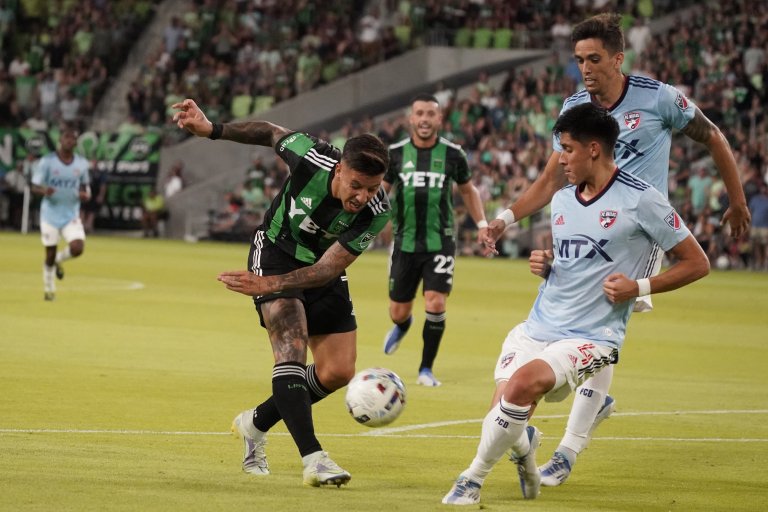 MLS Week 17 kicks off with a quick turnaround from the weekend with seven matches on Wednesday and two on Thursday for a nine-match midweek card.

One final US Open Cup Quarterfinal match will also be played Wednesday night between Orlando and Nashville.

Some of the biggest news from the weekend was a massive transfer that will see Wales international, ex-Real Madrid player, and Champions League winner Gareth Bale coming to LAFC.

Read on for the odds for every MLS Week 17 game, as well as our best MLS betting predictions.

There are many ways to bet on soccer from the odds above. Bet on the three-way moneylines, totals, favorites or underdogs. The biggest favorites in MLS Week 17 look to be LAFC and the New York Red Bulls, both with an implied probability of almost 60-percent to win their matches.

Let’s start with one of the two Thursday matches. The two newest franchises in MLS meet for the first time in MLS Week 17 Thursday night.

Austin, expectedly is off to a better start this year, now in their second campaign. But for Charlotte, 18 of those 20 points have come on their home field. They’ve scored in six of eight at Bank of America Stadium and have scored multiple goals in four of those wins. Charlotte were down a ton of players on the weekend due to COVID-19, but still put on a decent showing, losing 2-1 in Montreal.

The MLS declining Charlotte FC’s request to postpone tonight’s game is an absolute joke. If the boys can produce a result being down 10+ players would be a serious testament to Lattanzio

They face an Austin side coming off a comeback draw (2-2) with in-state rivals Dallas on the weekend after being down 2-0 at home. Austin is now 2-2-1 in their past five.

The Verde and Black are 11-5 to Over 2.5 totals overall, and 6-2 to over 2.5 totals on the road. Home or away Austin’s games average over 3.0 goals per game. Austin has now scored in 14 of 16 games this season and should have the firepower, with Golden Boot contender Sebastian Driussi and others to score. But at home Charlotte will look to put up a good showing. Austin has conceded in seven or eight and I see both teams finding the back of the net here.

Sebastián Driussi has now been named to the MLS Team of the Week a team-high 6 times this season.#AustinFC is unbeaten (7-3-0) in the last 10 matches in which Driussi has scored. pic.twitter.com/hxwz3TjZ4C

Here are a couple of two-game parlays for this week’s midweek MLS Week 17 action.

After zero wins in six league games, Toronto FC has now won two of three after defeating Atlanta United 2-1 at home at BMO Field in Ontario on Saturday. While not in the lineup, new DP signing Lorenzo Insigne was in the building and clearly his new teammates were keen to put on a strong performance.

“I played for 10 years with Napoli and with the Italian National Team, I won the Euros, so I don’t have any problem with being under pressure. I would rather have my actions speak for me on the pitch.”

Toronto scored early in the 8th minute through Canadian Jonathon Osorio, before Luiz Araujo drew the Five Stripes level in the 57th. It was another Canadian, Ralph Priso who scored the winner for TFC in the 78th.

Toronto is now 11th in the East, tied with Columbus (12th) with 20 points. Despite the win, it was now an incredible 24th straight game where TFC has allowed a goal, and also 45th in 46th games.

The Crew drew 0-0 in Real Salt Lake on the weekend. Caleb Porter’s Crew have been slumping of late with just one win in six. They too, are welcoming a massive addition to the club with record-signing Cucho Hernandez soon to join the club.

These teams played earlier this season, a 2-1 home win for the Crew. Last year both teams won at home, Toronto 2-0 and Columbus 2-1. A road team hasn’t won any of the past seven meetings.

When you’ve allowed goals in 24 straight, you simply have to assume that trend continues until TFC’s defense proves otherwise. But at home against a Crew team who are 1-5-2 on the road this season, they’re more than capable of finding the back of the net themselves.

The Sounders are rounding into form heading into MLS Week 17 and are now undefeated in their last four. And they’re winning games without Raul Ruidiaz as they did on the weekend, defeating SKC by a 3-0 score.

Seattle is 5-1-1 in their past seven and has scored in six of those seven.

CF Montreal is also coming off a win, 2-1 at home to Charlotte last weekend. They’ve won three of six, but two of those have come against expansion side Charlotte. They’ve also lost three of five and are without Djordje Mihailovic. Montreal may have won on the weekend, but they did so against a Charlotte team missing over 10 starters and still didn’t look great. They’ve now conceded in 15 of 16 games this season. They’ll concede in Seattle.

Parlay Picks: Toronto vs Columbus both to score & Seattle to score (-114); 1 unit

Here is a second parlay from Wednesday’s matches.

It’s a new year, but same ol’ Fire. At 3-5-8 with 14 points, they’re not only bottom of the East but bottom of the overall MLS standings. Nobody has scored fewer goals than Chicago’s 14.

Chicago has just one win in their past 12 games and that came against DC, 1-0, the only other team in the league tied with them at 14 points for bottom overall. Chicago missed Xherdan Shaqiri in the lineup this past weekend with a thigh injury. Listed as doubtful for Wednesday, that’s bad news considering the Fire have scored just once in the four games he’s missed this season.

Things are heating up between NYCFC and Philadelphia Union pic.twitter.com/HcNie0QnHA

Philly meanwhile, sits only behind LAFC in the Supporters’ Shield race with 29 points. They’re an interesting case though. They’ve won only seven games of their 16, but have lost just once all season. No team has drawn more than the Union’s eight draws. No team has allowed fewer than Philly’s 12 goals against.

Kacper Przybylko will lineup against his old team for the first time. Przybylko is Chicago’s third all-time leading goalscorer after playing in 83 games with the team.

Neither team is in the playoffs entering MLS Week 17, but both are coming off weekend wins. Portland with 19 points are just two behind Houston with 21.

While these teams drew 0-0 earlier this season in April, that was the only scoreless draw in their past ten meetings. Portland has scored against Houston in each of the other nine meetings.

Another one for Niezgoda! That’s 3-0 in favor of @TimbersFC! pic.twitter.com/xMx8umN1GU

The Timbers have scored in six of eight home games this season and in 21/23 of their past home games dating back into last season.

The Dynamo have two road wins this season and one clean sheet. However, those are their only two road wins in their past 32 away games.

The Timbers are strong at home, have plenty of attacking options and rank sixth in MLS in shot attempts. They should find the back of the net on Wednesday.