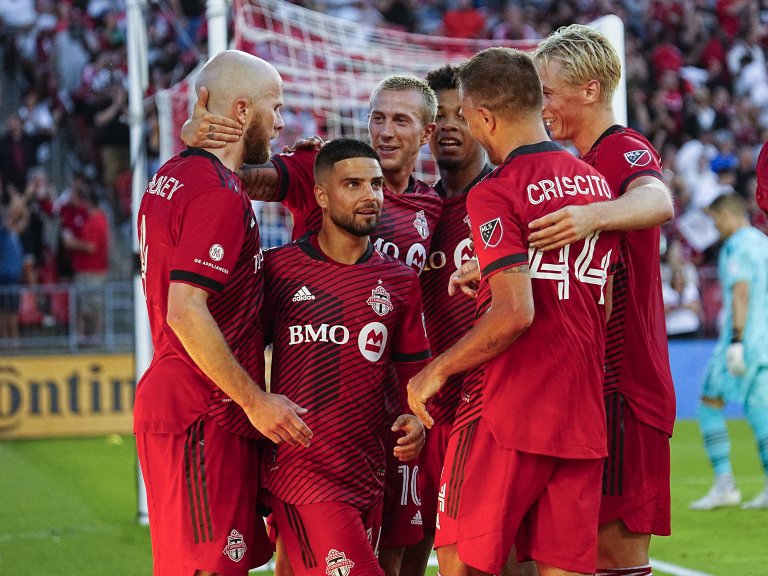 Our MLS picks begin on Friday night with the match of the weekend when LAFC hosts the Seattle Sounders as heavy MLS odds favorites. Saturday includes a huge 11-game card, while Sunday features just a single game with DC United hosting Orlando City in what will be Wayne Rooney’s first game in charge of United.

Read on for the MLS odds for every MLS Week 23 game, as well as our best MLS predictions.

The first game of the weekend sees MLS Cup odds favorite Los Angeles FC as the heaviest favorite of the weekend. New England and Philadelphia are also strong home favorites as well.

When making your MLS picks today, consider that Philly has just one defeat in their past 12 games. They, along with NYCFC, are the hottest teams in the East with 21 points over the past ten rounds. LAFC have collected the most points overall with 22 over that span. At the other end of the table, DC United at 1-2-7 have just five points from their past ten.

The Revs are tenth in the East with 26 points, while TFC is 13th with 22 points. Toronto are big underdogs in the MLS odds.

It’s a rare thing, but for Toronto, they’ll actually be entering this match in better form than their opponents. New England had an impressive streak of ten matches undefeated, but after losing 4-2 to NYCFC and 2-1 to Philadelphia, along with last week’s 0-0 draw in Columbus, they are now winless in five.

Meanwhile, Toronto ended a run of five games without a win, with a convincing 4-0 thrashing of Charlotte FC at home in BMO Field in Ontario last week. The debuts of Italian superstars Lorenzo Insigne and Federico Bernardeschi ignited Bob Bradley’s side in what was their most impressive showing of the season. Also worth noting is the clean sheet was the first for TFC after conceding a goal in 29 straight in the league.

However, the good vibes were short-lived when they fell to the Vancouver Whitecaps in penalties just three days later on Tuesday in the Canadian Championship Final.

“Teammates respect that, everybody sees the moments where the football is getting better. And now, in a way, we’ve got 12 finals. The work to continue to be a good team, and especially where we are at the moment, there’s determination on that end.”

A return to Gillette Stadium could be what the doctor ordered for Bruce Arena’s side where they are 4-4-2 on the year. They’ve scored in 9/10 home matches, yet have conceded in each of their past five and in 7/10.

Backing the Over with both of these teams this season has been money for sports bettors. The Revolution are 14-7 to Over 2.5 totals, while Toronto is 14-8. Only four teams in the league have gone Over at a higher rate. Both teams are tied in eighth for average goals per game in their matches at 3.1.

While they haven’t met this season previously, last year’s results saw each team win on the road, Toronto 3-2 and New England 2-1.

For Toronto, one clean sheet in 30 matches, at home, on an electric night against the league’s expansion team, doesn’t suddenly make them good. At least not defensively. They own the league’s worst xGA at 42.2.

“He’s willing to battle”@giacomovrioni32 impresses during his #NERevs debut.

Lining up against Carles Gil, Gustavo Bou and new DP striker Giacomo Vrioni on the road on a short week is not a recipe for another clean sheet. However, Bou may not be ready to return from injury, and Jozy Altidore, a possible backup has been loaned to Mexican side Puebla.

Plus, Insigne and Bernardeschi could be rotated or start on the bench after just joining the team and playing in two games in three days. It’s worth a lineup check for both of these teams before betting. However, there is no denying Toronto looked like a completely different team last week and the Revolution haven’t proved capable of keeping many clean sheets themselves. The MLS odds for goals look appealing here.

Yet another team coming off mid-week Cup competition disappointment is Sporting Kansas City. For Peter Vermes and SKC, the letdown may be even bigger than Toronto’s loss to Vancouver. And that is because Sporting were held off the scoresheet in the US Open Cup Semifinals to USL Championship side Sacramento Republic. With the other side of the bracket featuring two MLS teams with Orlando and New York, SKC were clearly seen as having the easier path to the final. However, after a 0-0 draw in regulation, Republic emerged victorious 5-4 in penalties.

It was just another of many low points for Sporting KC this season in a year which sees them at 5-5-13 with 20 points. They’re only above DC United with 18 points in the overall MLS standings. SKC have scored just 19 goals on the year and conceded a whopping 40.

MVP race is heating up ?

Their 19 goals are the fewest in the league and so too is their xG of 18.7. This means shockingly they’ve actually outperformed their expected goal total just slightly. They rank 26th in goals allowed and 25th in xGA.

Their opponents on Saturday in MLS Week 23 Austin FC, will be looking to rebound off a poor showing last week at home to the New York Red Bulls. Austin is tied for third in the overall Supporters’ Shield standings. They faced a rotated Red Bulls team last Sunday who was preparing for the USOC semi days later. But it was New York who jumped ahead early 2-0 and held leads of 3-1 and 4-1 before holding off an Austin comeback attempt and winning 4-3.

Sebastian Driussi had two of Austin’s three goals in the match and now sits alone atop the Golden Boot race with 13 goals.

Heading on the road for this match shouldn’t faze the Verde and Black. They, along with the Red Bulls own the best road records in MLS at 7-2-3. Austin hasn’t lost on the road in their past five and they’ve scored in every single road match this season except their first back in March.

Last week’s loss snapped a run of seven without defeat, while SKC have just two wins in ten recent matches.

Offensive catalyst. Get to know our newest Designated Player, powered by @talroo_official. pic.twitter.com/CwQTn7eszx

Austin for the outright win in the MLS odds looks like great value. But road wins are often hard to come by. One of the ways to bet on soccer is to bet the ‘draw no bet’ market where you win if your team wins and get your stake returned if they draw. That will be one of my MLS picks for today in MLS Week 23.

Finally, let’s include one two-game parlay into our MLS picks.

LAFC vs Seattle Sounders: LAFC are tops in the Supporters’ Shield standings and Gareth Bale could be in line for his first start on Friday. The Welshman got his first goal with his new club last week against SKC in a 2-0 win making the league’s second-leading scorers 6-1-1 in their past eight. Seattle snapped a three-game losing skid with a win over Colorado last week, but they were 1-0-4 in their previous five and had been shut out in three of those four losses. They missed injured striker Raul Ruidiaz in those three shutout losses. While the Peruvian returned to training this week, he may not be fit to start. The teams drew 1-1 earlier this season in Seattle but LAFC are 6-2-1 at home to Seattle all-time. They’re 8-2-1 at the Banc this season. (Pick: LAFC to win -180)

#FCCincy captain Luciano Acosta is ready to bring energy to the pitch Saturday at Inter Miami after missing the last three games because of a red card suspension. More on his return, plus Pat Noonan’s thoughts heading into the final third of the season. https://t.co/T8pSIL8LOs

Inter Miami vs FC Cincinnati: Neither of these clubs are in great form right now. Inter Miami lost 2-0 last week and have just one win in five. They’ve conceded a goal in each of their past eight. But they are 6-1-1 in their past eight at home with both teams scoring in 8/9 recent home matches. FC Cincinnati has only lost once in their past six, but they also have zero wins, with five draws. Outside a 2-0 road loss to Columbus, both teams have scored in all five of those draws. That is also the only time in their past 15 matches they’ve failed to score a goal. FCC have been missing captain Luciano Acosta for the past three games due to suspension but he’ll return Saturday for MLS Week 23. Cincy took the earlier meeting this season by a 3-1 scoreline at TQL Stadium. (Pick: BTTS -160)

Parlay Picks: LAFC to win & Miami vs Cincinnati both teams to score (+153); 1 unit at Caesars Sportsbook