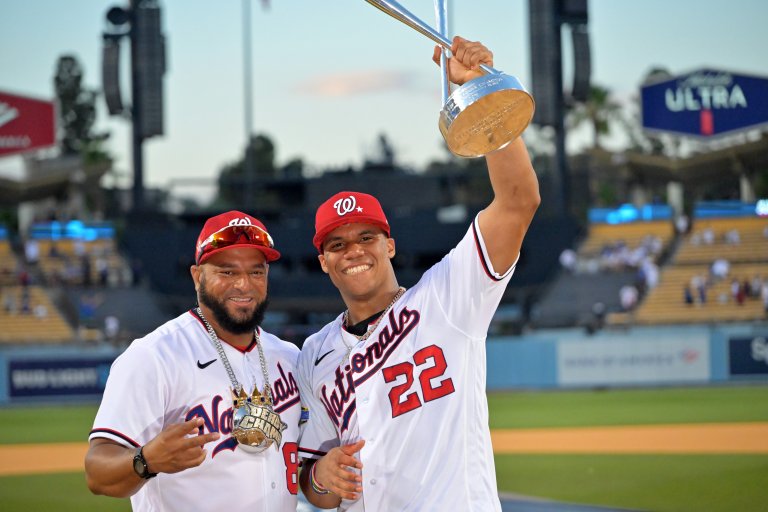 A home run that didn’t count but should have. Several home runs that were counted but shouldn’t have been added to the total.

Put these two events together and MLB bettors have a major-league controversy to discuss from Monday’s MLB Home Run Derby.

Often the marquee event during MLB All-Star Weekend, the home run derby is a bigger deal than the game itself. That means plenty of baseball bettors are getting action while watching massive numbers of baseballs exit the stadium.

That being the case, things had better be on the up and up. And it would appear that during Monday’s MLB Home Run Derby at Dodger Stadium, there was skullduggery afoot. Mistakes, oversights and bending of the rules ended up costing some bettors plenty.

Kyle Schwarber of the Philadelphia Phillies came into the MLB Home Run Derby with a National League-leading 29 home runs. That was the highest homer total among the eight competitors.

He was the #1 seed and the #2 betting choice in the event. But Schwarber didn’t even make it out of the first round of the bracket. He lost by one home run to #8 seed Albert Pujols of the St Louis Cardinals. Pujols recorded a 20-19 victory.

Robbery in the Ravine. pic.twitter.com/luIhUuWiRa

As Pujols and Schwarber went to overtime, replays clearly were showing that Schwarber clouted another dinger that didn’t get dinged up on the scoreboard. It would’ve been his 18th homer. It also would’ve meant that both Schwarber and Pujols should have been left with a final count of 20 home runs. They should’ve kept competing to determine a winner.

Schwarber entered the competition with the second-best betting line in the MLB Home Run Derby odds at +300. Only two-time defending champion Pete Alonso of the New York Mets (+175) was showing shorter odds. A lot of jack would’ve been staked on Schwarber jacking more balls out of Dodger Stadium than any of the other seven competitors.

Schwarber was gone in the first round. However, controversy wasn’t going anywhere in the MLB Home Run Derby.

Washington Nationals third baseman Juan Soto was competing in this event for the second time. He was a semifinalist last year. At odds of +600 Soto was drawing the third-shortest betting line in the MLB Home Run Derby.

Shufflin’ his way to a #HRDerby [email protected]_ is your 2022 champion! pic.twitter.com/BFsI5t2dO1

Ultimately, it would be Soto who’d win. He ended up slugging his way to a 19-18 victory over Seattle Mariners rookie sensation Julio Rodriguez in the final.

Again, though, it was not a victory without controversy.

Schwarber got jobbed out of a home run that ultimately sent him packing. Soto was packing in a lot of extra swings leading to home runs. This is clearly was in violation of the MLB Home Run Derby rules.

The rulebook for this event states that pitchers aren’t permitted to throw the next pitch until the previously-hot ball has completed its trajectory and come to a landing. MLB officials either turned a blind eye to it, or simply chose to ignore the fact that Soto’s pitcher kept feeding him pitches while balls he’d hit were still in play.

Soto’s pitcher kept tossing hit fat ones even while the home-plate umpire was holding his hands up, indicating that time was out until the previous hit finished out its journey. Some of these balls that Soto hit in this scenario left the ballpark and were counted as home runs – even though rules state clearly that they shouldn’t have counted.

Since batters are swinging against the clock in this event – each round is assessed a time limit – those extra swings proved valuable in aiding Soto to gain his verdict.

Without those erroneously-counted long balls, Soto would’ve lost to Rodriguez, meaning those who bet on the Seattle slugger were missing out on a hefty payday for backing Rodriguez at +800.

MLB could close this issue down by going back to the previous format of a batter getting 10 outs (none home run hits) per round, as opposed to swinging against time.