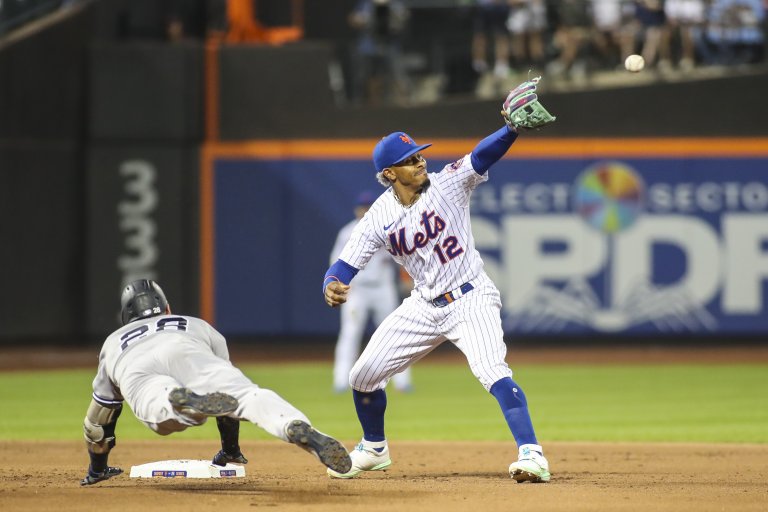 The New York Yankees and New York Mets are both being given -110 odds in their MLB inter-league game slated for Tuesday, August 23
The Yankees have lost their last six series and are 6-14 over the past 20 games, while the Mets have won the  past three Subway Series
Below, get the Mets vs Yankees odds and picks for Tuesday

The Yankees have dropped six series in a row. They are 6-14 in August.

Relief doesn’t appear to be coming in the form of a showdown with their cross-city rivals. In head-to-head meetings, the Mets have won three in a row. They swept a two-game set from the Yankees at Citi Field last month. However, the Yankees hold a 6-5 edge in the last 11 at Yankee Stadium.

Oddsmakers are billing this one as a toss up. Both the Yankees and Mets are assigned -110 odds. The Mets have gone over the total 62 times this season, tied for the MLB lead.

First pitch at Yankee Stadium is set for 7:05pm ET on Tuesday, August 23. Scattered thunderstorms with 8 mph wind and a temperature of 85 degrees are in the weather forecast.

The Mets are hurting for starting pitching. Carlos Carrasco (oblique strain) is on the IL. There was a realistic chance that right-hander Taijuan Walker (back) might be joining him. Instead, after going through a workout session Sunday and being assessed Monday, it will be Walker taking the ball for the Mets on Tuesday.

Buck Showalter says that Taijuan Walker will pitch for the Mets tomorrow, if the weather cooperates: pic.twitter.com/6IRRSPtDpc

Twice in his past three starts, Walker didn’t get to the third inning. He’s allowed 10 earned runs over his past nine innings of work for an ERA of 10.00. That being said, Walker is 7-1 in his past eight decisions.

It’s been 13 games since a Yankees starting pitcher won a game for the team. Since arriving from the Oakland A’s via trade, right-hander Frankie Montas is 0-1 with a 9.00 ERA. He’s allowed six earned runs in two of those three starts.

“I want to go out there and do my best. This is not my best. I haven’t done my best”

Over his last five starts for Oakland, Montas was 1-2 with a 2.57 ERA. In three career appearances at Yankee Stadium, Montas is 0-2 with a 5.54 ERA. He’s allowed 12 hits, two of them home runs, and eight earned runs in 13 innings pitched there.

Montas has pitched one inning against the Mets during his MLB career. He allowed a home run and two earned runs for an ERA of 18.00 and a WHIP of 2.00.

Which is more likely to happen this year: Aaron Judge breaks the AL record with his 62nd HR or Albert Pujols reaches 700 homers? #ULTRAMoment pic.twitter.com/J6sPWXVsuv

Looking at the recent stumbles by each of these starting pitchers, better than trying to figure out which one might get their act together, why not place a wager that neither of them will?

Ballgame. It’s a 4-2 #Yankees win over the Mets in the Subway Series.

The Yanks have won consecutive games for the first time in August.

The over is the play on this game. As noted earlier, no MLB team has gone over more this season than the Mets. With 58 wins on the over, the Yankees aren’t far behind.