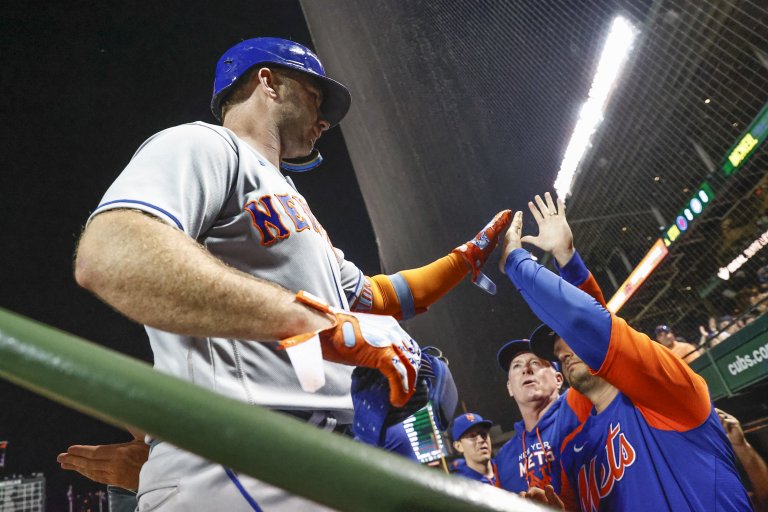 The Mets vs Cubs odds favor New York as -140 moneyline favorites on Saturday (July 16, 2:20pm ET) in Game 1 of a doubleheader
New York will send Taijuan Walker (7-2, 2.63 ERA) to the mound in the first game, while Chicago will counter with Marcus Stroman (2-5, 4.91 ERA)
Read below for the Mets vs Cubs odds, analysis and betting prediction

Friday’s Mets-Cubs contest was postponed due to heavy rain meaning the clubs will now play a double-header on Saturday.

New York opened up the four-game set by pounding Chicago 8-0 on Thursday, extending the Cubs losing streak to seven games. Oddsmakers don’t expect Chicago’s bleeding to stop on Saturday, as the Mets opened up as the road chalk.

New York is currently a -140 moneyline favorite in a game with a total a total as of Friday night. First pitch is scheduled for 2:20 pm ET at Wrigley Field in Chicago, IL, with clear skies and 79 degree game-time temperatures in the forecast.

The Mets, who boast one of the four shortest prices in the World Series odds, will give the ball to Taijuan Walker. The 29-year-old is in the midst of a career year and is fresh off delivering one of the best performances of his season.

Walker shutout Miami on Sunday over seven innings, scattering three hits while striking out seven. He’s allowed three or fewer runs in 13 of his 15 starts, and has yielded just three runs total over his past 20.1 innings.

The Cubs, who have seen their MLB divisional odds crater all the way to +25000, will counter with former Met Marcus Stroman. The 31-year-old is off to an underwhelming start to his Chicago career, posting just two wins and a 4.91 ERA in 10 starts.

Stroman pitched very well last week in his return from the COVID list after a month long absence, throwing four scoreless innings of two hit against the Dodgers. It was a far cry from his previous start before his illness, as he coughed up 10 hits and nine runs to St. Louis.

Opponent hitters are slugging .419 against him so far, which is the second highest mark he’s ever yielded. A big reason for that is his career worst fly ball rate, which is especially problematic at home when the wind is blowing out.

If you like offense it must be hard to be a Cubs fan these days. Chicago was shut out for the fourth time this season on Thursday and managed to get just one runner past first base during the first 8 innings. They’ve now scored only three runs total in their past three outings.

They’re batting just .200, with a .251 OBP over the past week, while averaging 2.8 runs per game. They’ve crossed the plate two times or less in three of their past four games, and three times or less in seven of eight.

The Mets won for the third time in four games on Thursday, improving their road record to a sizzling 28-19. The eight run outburst gives New York’s lineup 15 runs in the past two contests, but this team is by no means a one trick pony.

Mets hurlers have been exceeding expectations all season, even with stud starters Max Scherzer and Jacob deGrom absent for much of the year. New York’s starting rotation is 7-3 in July, with a 2.55 ERA in 14 starts. Overall, the Mets boasts the seventh lowest ERA in MLB and the second most strikeouts.

With Walker on the mound, expect the Cubs power outage to continue. In fact, with Scherzer set to start the nightcap, Chicago hitters are going to have a tough time crossing the plate at all on Saturday.

Not only have the Mets starters been pitching phenomenally this season, the relievers have as well. New York’s bullpen ranks top-10 in ERA, and top-three in K/9 and strand rate.

Cubs relievers meanwhile, rank bottom-nine in strand rate and 26th in ERA. Chicago has allowed 47 runs while losing seven straight, and there shouldn’t be much optimism that they can win either game on Saturday.