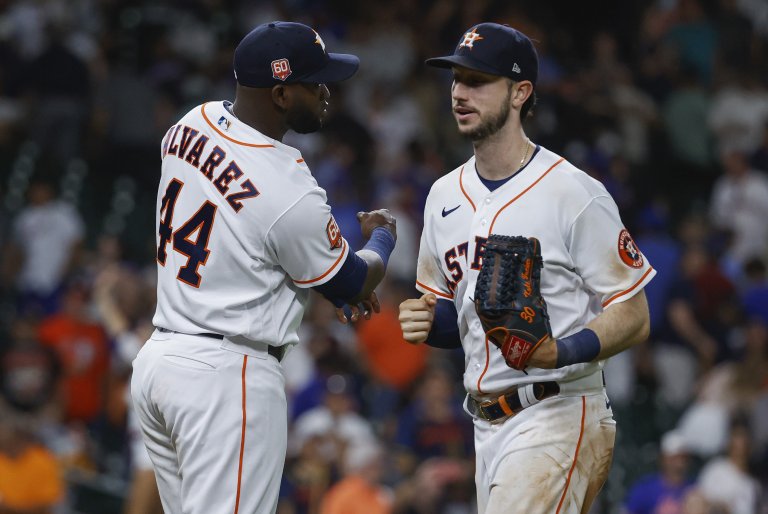 The Astros are -129 home favorites over the Mets on Wednesday
Carlos Carrasco (8-2, 3.96) will pitch for New York against Luis Garcia (4-5, 3.41)
A look at the Mets vs Astros odds and matchup can be found below with a prediction

The Houston Astros will look to sweep a two-game series from the visiting New York Mets at 2:10 p.m. ET Wednesday at Minute Maid Park.

Odds as of June 21st at Barstool Sportsbook.

The Astros are -129 favorites giving them an implied win probability of 56.33%.

Both teams are high in the World Series odds as Houston is the third choice at +650 and New York the fourth choice at +700 after the co-favored Los Angeles Dodgers and New York Yankees at +450.

The Minute Maid Park roof will likely be closed as the high temperature is forecast to be 97 degrees along with a 20% chance of showers and thunderstorms.

Carrasco has been winning regularly as he is 7-1 with a 3.74 ERA in his last nine starts. He beat the Miami Marlins last Friday in New York when he gave up three runs and eight hits in 6.1 innings with seven strikeouts and two walks.

The cancer survivor is an even better guy.

Reason number 6,986 why Carlos Carrasco is a great human being. #metstwitter pic.twitter.com/S3o1QKqH1D

Garcia ended a five-start winless streak last Wednesday against the Texas Rangers in Arlington. He allowed two runs (one earned) on four hits in six innings while striking out nine and walking none.

Garcia also threw an immaculate innings, striking out the side on nine pitches, as did teammate Phil Maton.

Martín Maldonado catches two immaculate innings, from Luis García in the second and Phil Maton in the seventh. First time two in the same game in Major League history. pic.twitter.com/asOF92HDrA

This will be Garcia’s first career appearance against the Mets.

Mark Canha is the only Mets’ batter who has faced Garcia. The left fielder is 2 for 4 with a home run.

Kyle Tucker’s three-run double highlighted a four-run fifth inning that gave the Astros a 7-0 and they then coasted over the Mets on Tuesday night.

The King of Queens. pic.twitter.com/kgw7dlEqZL

Altuve, Yordan Alvarez and Jose Siri all homered for Houston. Michael Brantley and Alex Bregman had two hits each.

Alvarez (sore right hand) returned to the lineup after missing one game.

The Mets’ Pete Alonso went 3 for 3 with a walk.

Jeff McNeil says the MRI on his hamstring showed “nothing” and got on the team bus right after getting the MRI yesterday pic.twitter.com/BSuUx7gIpt

Carrasco has got the win in seven of his last nine starts but has struggled away from Citi Field this season. We’ll go with the Astros at home in this matchup.