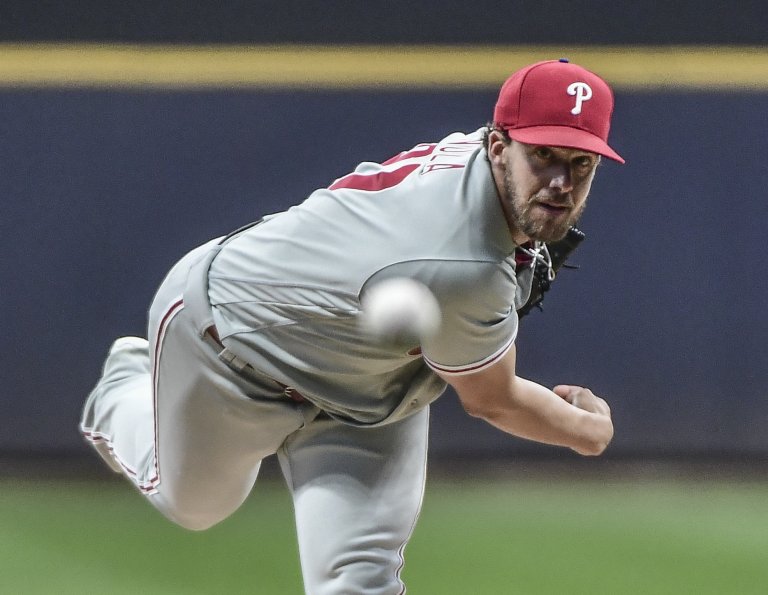 The Phillies are -155 home favorites over the Marlins on Monday night
Sandy Alcantara (6-2, 1.61) will start for Miami against Aaron Nola (4-4, 3.50)
A look at the Marlins vs Phillies odds and matchup can be found below with a pick

The Miami Marlins and host Philadelphia Phillies will both try to start new winning streaks when they meet at 7:05 p.m. ET Monday in the opener of a three-game series at Citizens Bank Park.

Odds as of June 12th at BetMGM.

The weather forecast expects a gametime temperature of 84 degrees and a low of 67 with partly cloudy skies and west wind at 5 mph. There is a 20% chance of rain but not until 11 p.m., so the game should not be affected.

Alcantara has been outstanding over his last six starts, compiling a 4-0 record with a microscopic 0.56 ERA.

Last Tuesday, Alcantara pitched nine scoreless innings against the Washington Nationals at home but wound up with a no-decision. He allowed six hits, did not walk a better and struck out six.

Nola has won each of his last three starts with a 2.42 ERA during that span. He pitched eight shutout innings last Tuesday to beat the Brewers in Milwaukee, giving up four hits while striking out six and walking none.

Nola can be dominant, though.

Aaron Nola recorded 10 straight strikeouts, tying the record for most in MLB history.

Bryan De La Cruz provided one of the few highlights for the Marlins on Sunday in their loss to the Astros when he hit a three-run home off Justin Verlander in the seventh inning. That drew Miami within 5-4 but it got no closer.

Right fielder Avisail Garcia was a late scratch because of left hand inflammation. He is questionable for Monday and scheduled for an MRI.

Phillies pitchers walked 11 on Sunday in the drubbing by the Diamondbacks and their hitters struck out 13 times. Realmuto went 3 for 4 with a double in a losing effort.

Closer Corey Knebel should be available Monday after playing catch Sunday with incident. Knebel felt shoulder tightness while warming up to pitch the ninth inning in Saturday’s win over the Diamondbacks and did not enter the game.

Knebel couldn’t close out this bid – but it was for a good cause.

Here’s Corey Knebel and Kyle Schwarber trying to outbid each other for a golf outing with Rhys Hoskins at Go Yard for MDA Philly. Knebel initially won, but after review, Schwarber and Knebel are sharing the prize. pic.twitter.com/ua9xUKeuQl

The Marlins took three of four from the Phillies at home in April in the teams’ only series so far this season. Garrett Cooper went 3 for 8 for the Marlins with one double and a home run and Jazz Chisholm Jr. was 3 for 9 with a double and two triples.

Miami is 30-22 against Philadelphia since the start of the 2019 season.

This is an intriguing matchup between two of the hottest pitchers in the NL. Alcantara has been just a smidge better lately, so we’ll ride with him as an underdog.