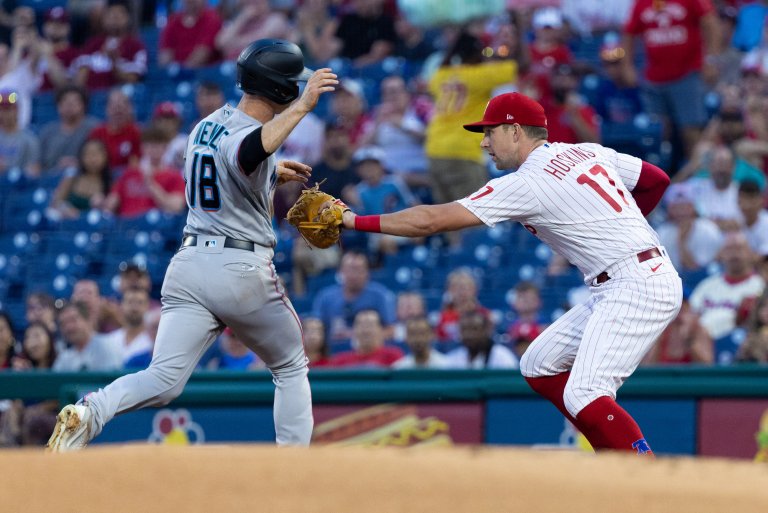 The Miami Marlins and Philadelphia Phillies face off at Citizens Bank Park on Thursday, August 11th
The Fish have fallen out of postseason contention since the break, while the Fightins are now firmly entrenched in one of the NL Wild Card spots
Read below for the Marlins vs Phillies odds and betting preview

The Miami Marlins (49-61) face the Philadelphia Phillies (62-48) on Thursday at Citizens Bank Park. The finale in a three-game series has a scheduled first pitch of 1:05 pm ET. Miami will send Edward Cabrera to the mound, while the Phillies counter with Kyle Gibson.

The home team is the favorite in this spot and have +7500 odds to win the NL East. Meantime, Don Mattingly’s club has +30000 odds in the MLB Division odds.

The first two starts of Cabrera’s 2022 season couldn’t have gone much better. They were both of quality outings which saw him go 2-0 with an 0.75 ERA over 12 innings. But the Fish have dropped the two most recent turns by the 24-year-old rookie, which saw him go 0-1 with a 5.19 ERA over 8.2 innings.

The Dominican native was got little run support in his last outing, going scoreless five innings and allowing no hits and three walks while striking out eight in an eventual 2-1 defeat to the Cubs last Friday.

Meantime, Philadelphia has flourished in Gibson’s starts this season — going 13-8. The 34-year-old journeyman has tossed 11 quality outings this season, including four in which he went at least seven innings. He was especially filthy in his most recent turn.

Kyle Gibson was nine outs away from perfection. Unfortunately, a hit-by-pitch and single in the seventh broke up the fun.

Still, this is a pretty phenomenal outing from Gibby.

Gibson ended up going eight innings, allowing a pair of hits, an earned run and a walk while striking out four in a 7-2 win over Washington last Friday.

Miami has struggled in the second half, going  6-13 since the break and are trying avoid being swept on Thursday. The Marlins’ record has been even worse since the calendar turned to August, going 2-6 as the dog days have settled in. Offense has been the issue this month, as the Fish have only scored  13 total runs and have failed to plate more than three runs in any August contest.

JJ Bleday’s family wasn’t holding anything back tonight after his home run.

They were flipping off fans and giving it back to crowd @Starting9 pic.twitter.com/QL3hMNqo05

The former first-round pick and Keystone State native Bleday has been the lone bright spot for Miami over the last seven days. The 24-year-old rookie blasted his second career home run in Tuesday’s 4-1 loss and fell a homer short of the cycle in Wednesday’s 4-3 defeat. He’s gone 8-for-20 since August 3rd and is one of only two Marlin regulars (Charles Leblanc being the other) hitting above .214.

Meantime, the Fightins have gone 13-5 since the break, with contributors up and down the lineup. Six Philly regulars (Rhys Hoskins, Darick Hall, JT Realmuto, Kyle Schwarber, Jean Segura and Bryson Stott) are hitting at least .300 over the last days, with Hoskings slugging four big flies over the stretch.

Rhys Hoskins has homered in the first inning in three consecutive games, becoming the first Phillie since at least 1900 to do so (player games or team games) and the first major league player since Anthony Rizzo did so July 25-27, 2021.

The Phillies currently have +4000 odds to win the Fall Classic, while the Marlins are at +30000 in the World Series odds.

The Phillies are 40-19 since Rob Thomson replaced Joe Girardi as manager and 25-13 since Bryce Harper was placed on the Injured List. Only the Mets and Dodgers are better in the NL during that span.

Cabrera has been solid, but Gibson has been better. It’s hard go against Philly in this spot and complete the sweep.