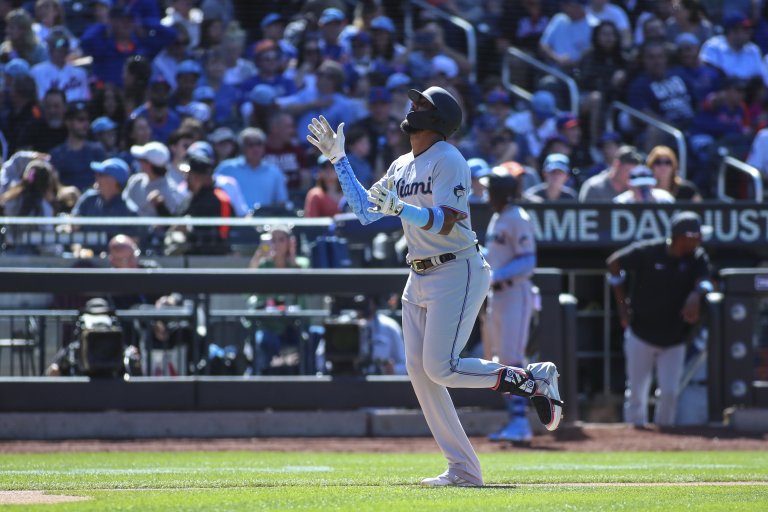 The Mets are -159 home favorites over the Marlins on Monday
Trevor Rogers (3-5, 5.87) will pitch for Miami against fellow lefty David Peterson (3-1, 3.60)
A look at the Marlins vs Mets odds and matchup can be found below with a prediction

The visiting Miami Marlins will look to split a four-game series with the New York Mets when they meet at 1:10 p.m. ET Monday at Citi Field.

The weather forecast for Flushing Meadows calls for sunny skies, a high of 78 degrees and northwest wind at 10 mph.

In a matchup of left-handers, Trevor Rogers (3-5, 5.87) is scheduled to start for the Marlins against David Peterson (3-1, 3.60). Rogers will be pitching on five days of rest and Peterson on four.

Rogers is 1-0 in his last four starts but with a 7.27 ERA as he continues to struggle a year after finishing second in the National League Rookie of the Year voting.

Rogers had a rough outing last Tuesday against the Phillies at Philadelphia. He was tagged for four runs on five hits in 3.2 innings while walking six and striking out two.

He is stylish, though.

Peterson took his first loss of the season in his seventh start last Wednesday against the Milwaukee Brewers at Citi Field. He lasted just four innings and surrendered four runs, six hits and two walks while striking out three.

Peterson won his lone career start against the Marlins in 2020, allowing two runs in five innings.

Scary moment there for David Peterson, who was nearly struck flush by a 97-mph Christian Yelich liner back through the box. Peterson with a Matrix-style move to avoid it. pic.twitter.com/oeh2UfTSwU

Peterson’ wife is due to give birth and the Mets have made undisclosed contingency plans in case she goes into labor.

The Marlins’ Jerar Encarnacion had a memorable major league debut Sunday in the win over the Mets. The right fielder hit a grand slam in the seventh inning for his first major league hit to put the Marlins ahead and threw out a runner at third base.

Encarnacion became the first MLB player to hit a grand slam and have an outfield assist in the same game since at least 1901.

Jazz Chisholm Jr. and Miguel Rojas had two hits each for the Marlins. Starling Marte had a triple among the Mets’ six hits.

The Mets have won two of three games in the first series of the year between NL East rivals and have a 43-27 advantage over the Marlins since the start of the 2018 season.

Rogers has had success against the Mets at Citi Field in his short career. However, this is a better version of the Mets than he has seen in past years.