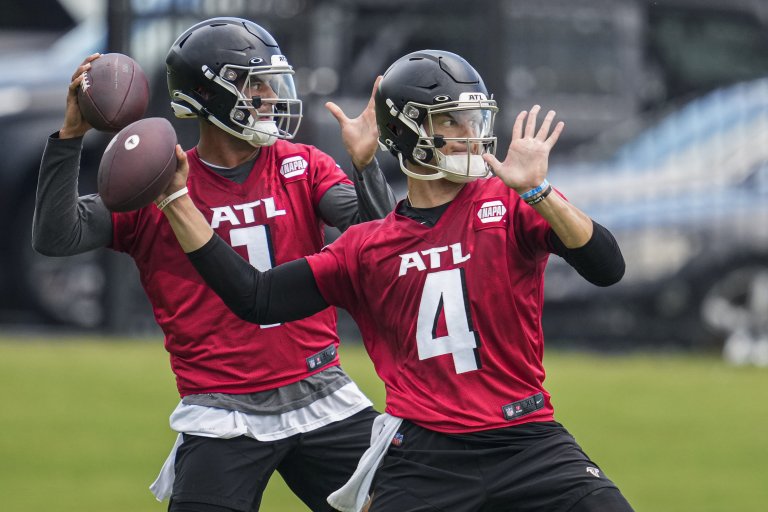 The Atlanta Falcons will have a new starting quarterback for the first time since 2007 when they open the season on September 11 by hosting the New Orleans Saints.

Veteran Marcus Mariota is the frontrunner going into training camp, which begins July 26. The Falcons signed Mariota as a free agent on March 25, the same day they traded four-time Pro Bowl selection Matt Ryan to the Indianapolis Colts.

Competing with Mariota will be Desmond Ridder, who was drafted in the third round in April from Cincinnati.

Odds as of July 4 at DraftKings. Get this DraftKings promo code to bet on the NFL

Whoever wins the job will have an uphill task as the Falcons’ odds to make the NFL playoffs odds are the longest of any NFC team at +550. That gives Atlanta an implied win probability of just 15.38% of reaching the postseason for the first time since 2017.

A Chance for Mariota Rebirth

The 28-year-old Mariota will get the opportunity to reboot his career after spending the last two seasons as the backup quarterback with the Las Vegas Raiders to Derek Carr. Mariota attempted just 30 passes during his time in Las Vegas, including a mere two in 2021.

Thank you Marcus Mariota for being a solid QB2/exciting gadget player for us for the past two seasons. Good luck in Atlanta. Once a Raider, always a Raider. ?‍☠️ pic.twitter.com/mTZ3jMOtRl

Prior to signing with the Raiders as a free agent, Mariota spent the first five seasons of his career with the Tennessee Titans from 2015-19 after winning the Heisman Trophy at Oregon. The Titans drafted Mariota second overall in ’15 behind Jameis Winston, who was selected by the Tampa Bay Buccaneers.

Mariota was the starter in Tennessee for four years before losing the job to Ryan Tannehill halfway through the 2019 season.

During his stint with the Titans, Mariota wasn’t terrible. However, he also didn’t live up to being the No. 2 overall pick as he never led Tennessee to the playoffs or was selected to the Pro Bowl.

Mariota also had a losing record as a starter with the Titans, going 29-32.

Ridder had an outstanding college career as a four-year starter at Cincinnati, which led to him being the second quarterback chosen in this year’s draft. Only, Pittsburgh’s Kenny Pickett, who went in the first round to the hometown Steelers, was picked higher.

Mobility is an asset for Ridder. He rushed for 2,180 yards and 28 scores for the Bearcats.

pic.twitter.com/IX7JkOliZs If you want work ethic look at Tom Brady
If you want accuracy look at Aaron Rodgers
If you want mobility look at Lamar Jackson
If you want arm strength look at Josh Allen
But if you want all look at Desmond ridder ?

And Ridder was certainly a winner in college as Cincinnati compiled a 45-7 record during his time there. The Bearcats went 13-1 last season and became the first Group of Five program to gain a berth in the College Football Playoff before losing to Alabama in the semifinals.

Ridder impressed Falcons coach Arthur Smith during offseason workouts with how quickly he learned the playbook and commanded the huddle.

Who Gets the Nod as the Falcons Week 1 Starter?

The Falcons signed Mariota to a two-year, $18.75-million contract that includes $6.75 million guaranteed. It seems doubtful they would spend that much money and not at least start him for the 2022 season as the No. 1 quarterback.

It also helps that Smith has familiarity with Mariota as he was on the Titans’ coaching staff during the quarterback’s entire tenure in Tennessee.

All signs point to Marcus Mariota starting Week 1 in Atlanta, can he achieve relative success?

Ridder is clearly talented and seems to be a quick learner. However, it is extremely doubtful he will be the Week 1 starter, barring an injury to Mariota.

Mariota is the way to bet this one, though he doesn’t offer any value as a -800 favorite, so your betting dollar may be better spent elsewhere.