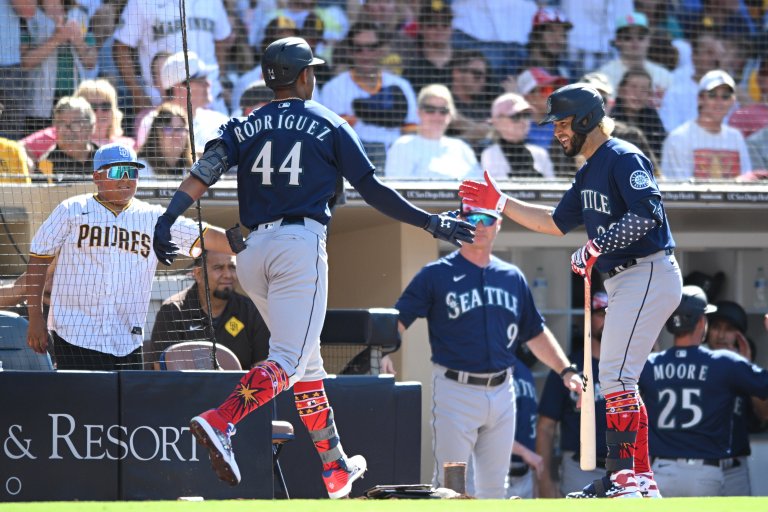 The San Diego Padres are -130 home favorites over the Seattle Mariners in an interleague game scheduled for Tuesday, July 5
At home, San Diego holds a 32-30 straight up edge on Seattle in all-time meetings
Below, see the  Mariners vs Padres odds and predictions

Five of the past seven Seattle-San Diego meetings resulted in a win by five or more runs by the victorious team. All seven of those games hit for the over on the total.

You have to go back 15 games and into the 2015 season to find the Mariners winning back-to-back games at San Diego. Oddsmakers are projecting that streak to be maintained. It’s San Diego that is set as the -130 home favorite in the second game of this brief two-game set. The Padres are 21-13 straight up in the game following a loss this season.

First pitch at Petco Park is set for 4:10pm ET on Tuesday, July 5. Cloudy skies with 10 mph wind and a temperature of 73 degrees are in the weather forecast.

At odds of -130, the Padres are offering an implied probability of victory of 56.52% in the MLB betting line. A successful $10 wager on Cleveland would deliver a payout of $17.70.

Mariners right-hander Logan Gilbert is 4-1 in his past five starts and  5-1 over his last six decisions. However, despite getting the win in each of his last two starts he’s allowed seven earned runs in 11.2 innings pitched for a 5.40 ERA.

In nine road starts this season, Gilbert is 5-1 with a 2.55 ERA. This will be his first career appearance against the Padres.

It’s been an injury-plagued 2022 for Padres right-hander Mike Clevinger. Just back from Tommy John surgery, the start to his season was delayed by a knee injury.  Three starts after making his season debut, he was back on the IL with a strained triceps muscle. One start into a comeback from that ailment, Clevinger was placed on the COVID-19 injured list.

When he has pitched, Clevinger is pitching spectacularly. He got the win June 29 against the Arizona Diamondbacks, tossing six innings of one-hit shutout ball. Clevinger struck out six against one walk.

In his career at Petco Park, Clevinger is 2-0 with a 2.95 ERA, including a complete game and a shutout. He will be facing the Mariners for the first time in his MLB career.

San Diego’s Nomar Mazara is the only Padres player with a hit off of Gilbert. In fact, he has two of them in two at-bats for a 1.000 average. Mazara has also driven in a run.

Justin Upton’s first HR as a Mariner ties the game in the 8th!? pic.twitter.com/G2KFDB1Gb4

Likewise, Justin Upton is the only Mariners batter with a base hit off of Clevinger. He is 5-for-17 (.294) with an RBI.

As well as both Gilbert and Clevinger are pitching this season, the total is set at a very low seven runs. Five of Clevinger’s seven starts have gone over that total. As for Gilbert, he’d be 7-7-2 on a total of seven in his 16 starts.

Taking into account how these two teams tend to pile up the runs when facing each other, the over looks to be a solid play here.