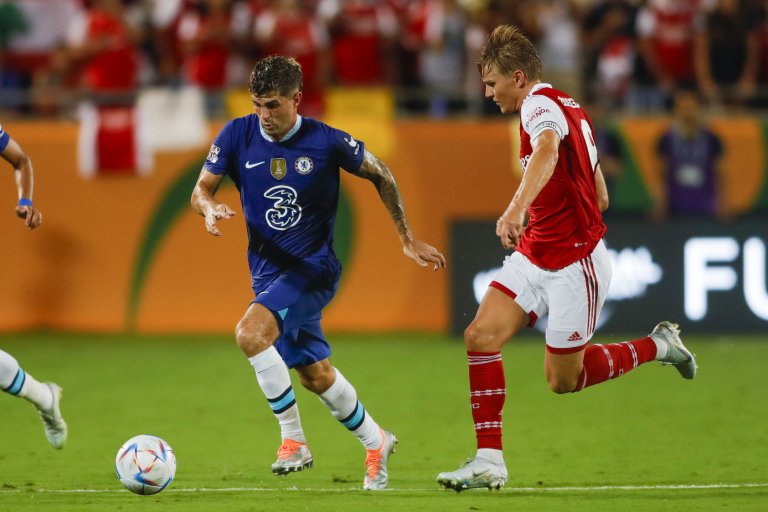 Premier League football is officially back this weekend with Matchday 1 of 38. The campaign starts with a bang on Friday as Crystal Palace hosts a new-look Arsenal side at Selhurst Park. In other action, Everton faces Chelsea, West Ham takes on Manchester City, and Liverpool travels to newcomers Fulham. Read on for the Premier League odds and best EPL picks for today.

Arsenal is a favorite in the first game of the campaign versus Palace at -120 odds after a busy summer where they added several reinforcements. Most of the big six are favored at a minimum of -100 for their opening fixtures, with Manchester City expected to beat West Ham in London.

Perhaps the most intriguing clash from a Premier League odds standpoint is Leeds vs Wolves, where both teams are at plus odds.

The Red Devils kick off their campaign on Sunday against Brighton at Old Trafford. Erik ten Hag’s side finished in sixth spot last term which resulted in Cristiano Ronaldo wanting out due to the lack of Champions League football. But, no club was willing to take on his hefty salary and he’s now likely to stay in Manchester, despite the recent drama.

Erik ten Hag: “I am really happy with Cristiano Ronaldo. We have a top striker. He is here with us and is in the squad”. ?? #MUFC

“We want Frenkie de Jong? I didn’t know! [smiles] It’s about the right players but I won’t make comments. When there is news, you will know”. pic.twitter.com/v1bvoDYgtz

United made a couple of important moves this summer as well, most notably signing Christian Eriksen and ten Hag’s former Ajax player, center-back Lisandro Martinez. Anthony Martial is also back after a brief loan spell at Sevilla.

Brighton really impressed in 2021-22, securing a top-10 finish as they ended up in ninth spot and only seven points off United for the final Europa placing. But, they just lost arguably their best player in Marc Cucurella, who joined Chelsea, while Blues defender Levi Colwell came to the Amex on loan.

Last season was a mixed bag between these two sides. The Red Devils won the first meeting 2-0, then Brighton hammered United 4-0 in the most recent encounter. But, playing on home soil in the opener, I like the hosts here.

The Toffees welcome Thomas Tuchel’s Chelsea to Goodison Park on Saturday. Everton was busy in the transfer window, but they did lose arguably their top attacker as Richarlison bolted for Tottenham.

The Blues’ squad will look much different come Saturday. Romelu Lukaku is gone to Inter on loan while Raheem Sterling is now at Stamford Bridge after a long tenure at Man City. They also secured the signature of Cucurella a couple of days ago, which should be a nice addition.

But the most impactful of them all is Kalidou Koulibaly, one of the best center-backs in Europe. He’ll make up for the loss of Antonio Rudiger. Chelsea might not be at the level of Liverpool or City, but they’re definitely strong enough to be in the top-three mix once again.

Everton has a very impressive track record against the Blues on the Merseyside, capturing four straight victories. The Toffees also haven’t tasted defeat in their opening match in 10 years (four wins, six draws). Chelsea may settle for a lone point here, but I believe both sides will find the back of the net which is another way to bet on soccer.

Leicester City locks horns with Brentford on Sunday at the King Power. The Foxes were very poor a season ago, finishing in eighth place with a 14-10-14 record. They made minimal moves in the window too, but Kasper Schmeichel did leave for Ligue 1 outfit Nice earlier this week. That’s certainly a big loss, with Daniel Iversen and Danny Ward expected to battle it out in between the sticks.

The most important thing for Leicester is Jamie Vardy staying healthy. The striker played in just 25 Premier League matches in 2021-22 but still managed to bag 15 goals and supply two assists. Defensively, Brendan Rodgers’ men also need to be better, conceding 59 in 38 outings.

Brentford certainly had a respectable first season in the top flight. They ended up just outside of the top-10 in 13th, comfortably steering clear of relegation. The Bees also added a couple of key players in the summer including Lazio keeper Thomas Strakosha and Burnley defender Ben Mee, both on free transfers. Christian Eriksen didn’t re-up though and went to Old Trafford.

“We are still in the market. I am overall satisfied with the squad but can we get that key player for the right place with the right abilities. Then we are open for it but it is not like we need to get a player in”#BrentfordFC #LEIBRE pic.twitter.com/t2eATye2Wx

Leicester is unbeaten in six games against Brentford and won both meetings last campaign by 2-1 scorelines. Also, the Foxes collected back-to-back victories on Matchday 1 across the last two seasons. Take the hosts here to get started on the right foot in the Premier League odds.