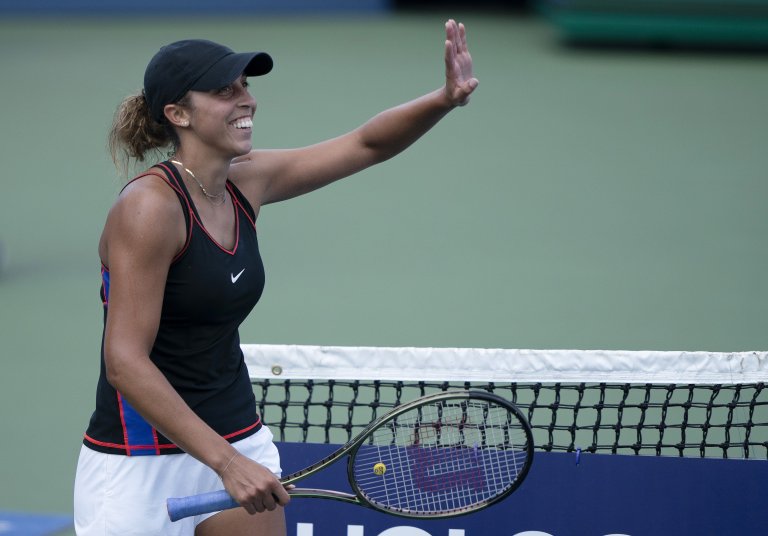 Two heavy-hitting unseeded players will square off in the Western & Southern Open quarterfinals
Elena Rybakina, the Wimbledon champion, is a slight favorite over American Madison Keys
Read on as we break down the matchup and look at Keys’s chances for an upset

With the top five on the WTA Tour failing to make the latter stages of tournaments these days, the WTA 1000 in Cincinnati is wide open for someone to grab the title.

Unseeded Elena Rybakina and Madison Keys will battle for one of the semifinal spots.

If Rybakina, a 23-year-old from Kazakhstan, had received the 2,000 ranking points she would/should have earned for winning Wimbledon last month, she’d be ranked No. 6 in the world. She’d also have a first-round bye. And she would have more friendly draws.

That’s not how it shook out. And at the moment, she’s actually ranked one spot below Keys, who didn’t even play Wimbledon.

But Rybakina, whom we’ve seen get on a hard-court run long before she was a Grand Slam champion, is playing like a top-10 player this week in Cincinnati.

First into the last 🎱

Against Alison Riske in the third round Thursday, she coughed up just six games.

It has been a very friendly draw so far, and Rybakina has taken full advantage.

First Career Win Over a No. 1 for Keys

As for Keys, whose best career moments came a number of years ago — though she’s still only 27 — this week has been a tease of what she’s capable of but too often hasn’t produced.

She drew the short straw and had to face two notably dramatic players in Yulia Putintseva and No. 16 Jelena Ostapenko in her first two matches.

“I got one game last time I played her. After I got two games, I was like ok I’m fine. The nerves went away.” – @Madison_Keys 😂

One is no walk in the park. The two back-to-back probably inflicts long-term brain lesions.

But Keys got through both in straight sets.

And then, on Thursday, she faced off against world No. 1 Iga Swiatek.

There were nervous moments in the second set, as she seemed well on her way to a bagel but instead was broken twice when serving for the match.

It was the first time in her career that Keys has beaten a No. 1.

In the one previous match between the two, Keys pulled off an impressive comeback win against Rybakina in the third round of the French Open.

Cincinnati is a fairly quick hard court, a surface that suits both.

The difference here is Rybakina is very much under the radar, with very little scar tissue so far in her career. It’s hard to tell from her poker-faced exterior, but she isn’t playing under a ton of pressure.

For Keys, it’s always about pressure. And that doesn’t lessen when she’s playing in her home country, with more eyeballs on her.

This week’s effort might be another tease from Keys, a former US Open finalist who lost in the first round last year.

It’s her third quarterfinal (or better) in Cincinnati, where she knocked off Muguruza, Kasatkina, Halep, Venus Williams, Sofia Kenin and Svetlana Kuznetsova to take the title in 2019.

But she lost her opening match to Ons Jabeur in 2020, and to Petra Kvitova last year.

Rybakina had been 0-2 in Cincinnati (once in qualifying) before making the third round last year, where she lost to Paula Badosa (No. 29 then, the ousted No. 3 seed this year).

She is far more consistent from the baseline than Keys, who can donate swaths of unforced errors.

You get the sense the Kazakh knows it, too, and won’t overplay.

Keys has to back up that win over a No. 1. It’s not the kind of occasion where she has tended to thrive.