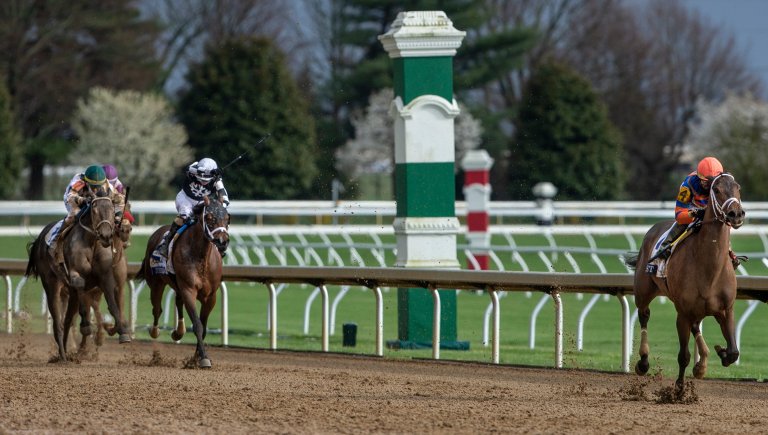 “Nest,” with jockey Irad Ortiz Jr. aboard dominates the field to win the Ashland Stakes on opening day at Keeneland. April 8, 2022

The Belmont Stakes has a strong recent history of high priced winners
Could Saturday’s Third Jewel of the Triple Crown be an upset?
Where is betting value present at the Big Sandy?

Three of the last six Belmont Stakes have been won by the favorite. The other three winners paid $12.60, $22.40, and $34.80 on two-dollar win bets. After watching the Kentucky Derby winner score to the tune of $163.60, and the Preakness Stakes produce a $13.40 victor, make sure you look carefully at the horses getting less attention on Saturday.

Our updated Belmont Stakes odds make clear looking outside of the favorites can be very profitable if an upset occurs. The prices are not all that different than what we saw shortly after the Preakness Stakes, a race that Derby winner Rich Strike passed on.

The best Belmont Stakes betting sites online give you some options on how to wager. Make sure you know all of the horse racing rules, and how pari-mutuel wagering works. Because the system is a little bit different than other sports; there are ways to take advantage of the public and how they bet.

The Belmont Stakes is always tricky. Each year at least one or two horses are running for the third time in five weeks, an awful lot by modern-day standards. You have to handicap which horses will like the marathon distance of a-mile-and-a-half. None of them have ever raced this far before. Plus, how do horses who have not been involved in the Triple Crown until now, and may be more rested or matured later, compare to those that are battle-tested?

Post time is slated for 6:45 pm ET. NBC will televise the race. The weather forecast calls for highs in the low 70’s with a 50% chance of rain.

Remember when looking for prices, these horses can finish second, third, or fourth and be very valuable. While a win bet is always fun, you can bet to place or show, and exotic wagers like exactas, trifectas, and superfectas reward bettors for picking the order of finish. If you haven’t brushed up already, now is a good time to gain an understanding of horse racing bet types.

Golden Glider Is a Belmont Longshot

Golden Glider (+2000 or 20/1 using the fractional form frequently seen in horse racing) won his first two races and subsequently finished out of the money in three Kentucky Derby prep races.

Last month he was a well-beaten second in Belmont Park’s Peter Pan Stakes.

Golden Glider was second, but 10 lengths back. His two wins, one last year in Canada, and the other in January at Tampa Bay Downs came against significantly weaker competition. He could be a good pick for your Belmont sleeper pick.

Barber Road (+1000 or 10/1) hasn’t won since November and has never finished first outside of Kentucky. However, he has three seconds and a third in 2022. His only off-the-board finish this year was a sixth-place performance in the Kentucky Derby.

Breaking from post number 14, Barber Road was wide on both turns on the first Saturday in May. It was arguably his best career race. He finished second, ahead of Oaks winner Secret Oath, in the Arkansas Derby.

Skippylongstocking (+2000 or 20/1) finished third, well behind Mo Donegal and Early Voting in the Wood Memorial. He was a touch wide on both turns in the Preakness Stakes.

Skippylongstocking has two wins in 10 starts and has hit the board on five occasions.

Nest (+800 or 8/1) was the Kentucky Oaks favorite, and ran pretty well, just not quick enough to hold off Secret Oath.

On one hand, you can argue the Oaks was as fast or faster than the Derby. On the flip side, when Secret Oath tried to beat the boys at the Preakness, she finished fourth. Nest has four wins in six starts and has never finished worse than third. This is her first try against boys.

Creative Minister (+600 or 6/1) has two wins in four starts and has never failed to hit the board. He was third in the Preakness and clearly has talent. A third race in five weeks is a lot to ask. That said, there is some value in Nest as a Belmont longshot pick if you are a believer, and there isn’t a great reason not to be optimistic.

Barber Road has proved he can hit the board against top horses so could be your best Belmont sleeper pick. That said, he has rarely won. We might use Barber Road underneath in exotics, or to place or show. As for a winner, trainer Todd Pletcher has won the Belmont three times. He even did so with a filly, Rags to Riches. On her best day, Nest can beat this group and score at a decent price.