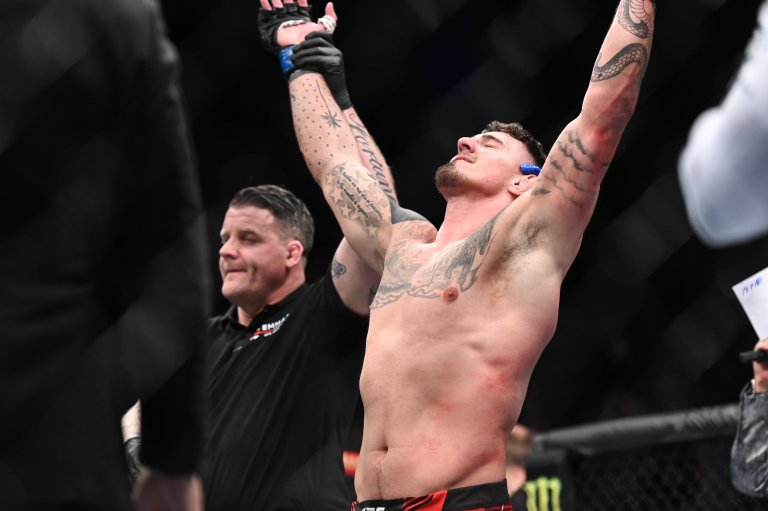 The UFC returns to London for the second time this year for UFC Fight Night: Blaydes vs Aspinall
Aspinall is set to enter the octagon in front of hometown fans as a betting favorite, while Chris Curtis takes on Jack Hermansson as slim chalk in the co-main event
Read on for all the UFC London odds, along with our best bets

For the second time this year, the UFC travels to London, where UFC Fight Night: Blaydes vs Aspinall is scheduled to take place on Saturday July 23. Heavyweight contenders clash in the main event, as Curtis Blaydes takes on Tom Aspinall, while the co-main event features a middleweight clash between Jack Hermansson and Chris Curtis.

Once again, fight fans should prepare for an early start at O2 Arena in London, England. UFC Fight Night: London prelim action gets underway on Saturday morning at 11am ET, followed by the main card at 2:00 pm ET, with the action exclusively available on UFC Fight Pass.

Curtis Blaydes has rebounded from a stunning knockout loss to Derrick Lewis by posting a pair of wins to cement his position as the No. 4 contender in the UFC heavyweight rankings.

Tom Aspinall has posted dominating wins in his first five UFC fights to claim the No. 6 spot in the UFC heavyweight rankings, with four of his victories coming inside five minutes.

“Razor” vies for a third straight victory when he steps into the octagon to face Tom Aspinall. The 31-year-old sports a pro MMA record of 16-3-0, with his only career losses coming against Derrick Lewis and current champion Francis Ngannou twice.

A wrestler from an early age, Blaydes is equally comfortable fighting standing up or on the mat. “Razor” is the all-time leader among UFC heavyweights in takedowns executed and total control time. He is also adept at defence, successfully defending against all but one takedown attempt in his past 13 fights.

Curtis Blaydes has some of the most violent ground and pound we’ve ever seen.pic.twitter.com/6NuUDiD8GG

But despite his prowess on the mat, Blaydes is not a submission threat. Instead, his focus is on wearing down opponents on the mat while following a ground and pound strategy. Accordingly, 11 of his 16 career wins have come by knockout, along with five decisions.

Aspinall has taken the UFC heavyweight division by storm since making his promotional debut two years ago. Nine of his 12 victories have in the first round, and four of his first five UFC wins earned him Performance of the Night bonuses.

He is a highly skilled Heavyweight who has bulldozed most of his competition.

In 14 MMA bouts, none have gone the distance.

He faces Curtis Blaydes this weekend.

Like Blaydes, Aspinall discovered wrestling at an early age. And in addition to holding a black belt in Brazilian Jiu-Jitsu, the 29-year-old Englishman has also competed as a boxer. However, unlike Blaydes, Aspinall can finish opponents with punching power or by tap out.

Aspinall is a ferocious puncher, averaging 7.33 significant strikes landed per minute. That ferocity has provided little opportunity for opponents to respond, with Aspinall absorbing just 39 total strikes through his first five UFC fights. However, his lack of experience in championship rounds leaves a huge question mark about his stamina.

Jack Hermansson looks to get back on track after losing three of his past five fights. Each of his past three fights have been decided by the judges, capped by a disappointing five-round split decision loss to Sean Strickland last time out at UFC Fight Night 200. “The Joker” is an accomplished Greco-Roman wrestler, and has submitted opponents in three of his past five wins.

Two years ago today, it took Jack Hermansson one minute and 18 seconds to submit Kelvin Gastelum

Chris Curtis announces he will have @darrentill2 and @BrendanMMA in his corner at UFC London pic.twitter.com/I8poEwCmeZ

A relative newcomer to the UFC, Chris Curtis agreed to accept this fight on short notice after Darren Till was forced to back out due to an injury. Curtis is somewhat new to the UFC, but is far from green. A three-time champion before making his promotional debut last year, “The Action Man” has lived up to his nickname by fighting seven times since January 2021, and has knocked out opponents six times during an eight-fight win streak.

Paddy Pimblett (-265): colorful Liverpool native needed just 3:50 to submit Rodrigo Vargas at the last edition of UFC London, and has now tallied four straight first-round finishes.
Paul Craig (+138): Craig has finished opponents inside five minutes four times during a six-fight unbeaten streak, and is well positioned to extend that run against a badly slumping Volkan Oezdemir.
Alexander Gustafsson (+150): A return to light heavyweight against a slumping opponent could be just what “The Mauler” needs to snap out of a career-worst three-fight losing streak.