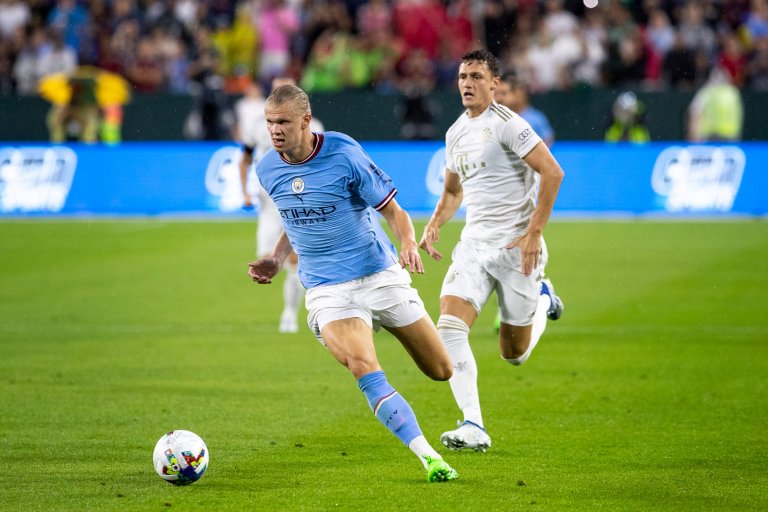 Curtain-raiser to EPL season takes place at Leicester at 12:00 pm ET on Saturday
Champion club City meets FA Cup winner Liverpool in a traditional ‘friendly’ fixture
See all the odds and best bets for Liverpool vs Man City in the England Community Shield

England’s two most powerful teams meet in the clash of Liverpool vs Man City on Saturday.

The match is nominally a friendly – the traditional Community Shield curtain-raiser to the Premier League season which begins six days later.

However, after battling head-to-head in last season’s title race – won by City – both sides will be keen to lay down an impressive marker for the coming campaign.

Odds as of July 29 at DraftKings

But this time it will be staged at Leicester City’s King Power Stadium – with the national arena in use for the final of the Women’s Euro on Sunday.

Jürgen Klopp confirms that Alisson will miss the Community Shield against Man City.

Another backup keeper with a trophy on the line ✋ pic.twitter.com/YKmgfhu9f0

It is played between the winners of the EPL title and the FA Cup, which was lifted by Liverpool last May.

At DraftKings, Man City is the favorite for a win at +130.

Meanwhile, Liverpool is priced at +180. The draw after 90 minutes is rated at +250, which looks like good value.

If the game is level after 90 minutes, it will go straight to a penalty shoot-out – with no extra time. The kick-off is at 12:00 noon ET.

This fixture will also be a showcase for both teams’ big new signings.

Furthermore, Uruguayan international forward Darwin Nunez will appear for Liverpool on English soil for the first time following his $101 million move from Benfica of Portugal.

This is following the departure of the prolific Sadio Mane for Bayern Munich.

Across a wide range of opinions, Man City is being backed to win the title again in the EPL odds with Liverpool generally rated as the second favorite.

With both teams keen to display their new attacking power, there are likely to be goals in this meeting of Liverpool vs Man City.

That makes the total goals prop offer of +195 for there to be at least four strikes on target an attractive one (TG Ov3.5).

Meanwhile, the spread offers include a price of +500 for Liverpool to win by two goals or more after 90 minutes (spread -1.5).

All focus turns to… The Community Shield. ?️? @ManCity pic.twitter.com/PW02zDCLhI

In last season’s title fight, City pipped Liverpool by just one point – with a tally of 93 against their rivals’ total of 92.

Their most recent meeting was in the semifinal of the FA Cup when Liverpool was the 3-2 winner.

Both league meetings in the EPL season finished 2-2.

Those three scorelines add to the idea that there will be several goals in Liverpool vs Man City this weekend.

City had been eliminated in the semifinal by Madrid.

In 67 appearances for Borussia Dortmund, Haaland scored a stunning 62 goals.

Therefore, he is expected to greatly add to City’s threat up front.

So he is rated as the favorite to score in Liverpool vs Man City at +320.

Meanwhile, his fellow new signing – the Argentine international Julian Alvarez – is priced at +350 to hit the target.

Mohamed Salah is the Liverpool player most favored to score at +450 with Darwin Nunez at +500.

There have been mixed results in pre-season friendlies for Liverpool.

The Reds training ahead of the Community Shield Final against Manchester City! ? #YNWA pic.twitter.com/qBMW3O05Lz

But preparations opened with a painful 4-0 defeat by big rivals Manchester United in Bangkok. And, most recently Liverpool lost 1-0 against Red Bull Salzburg.

Man City has defeated Mexico’s Club America 2-1 and was a 1-0 winner against Bayern Munich.

This clash of Liverpool vs Man City is a show-piece occasion with plenty of bragging rights at stake.

Moreover, both sides want to showcase their new goal-scoring threats. And that makes the total goals offer of +195 for there to be four goals or more a potentially lucrative one.