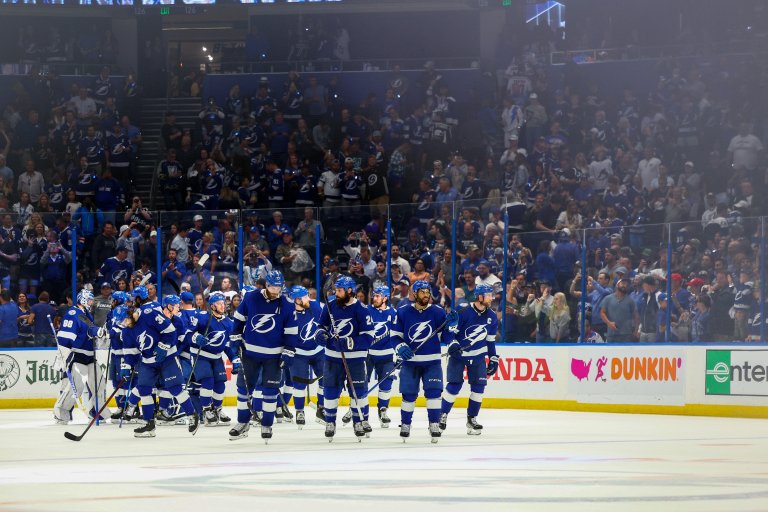 The Tampa Bay Lightning visit the New York Rangers for Game 5 on Thursday, June 9th
The home team has won every game so far in the Eastern Conference Final
Read below for the Game 5 Lightning vs Rangers odds, picks, and prediction

It’s down to a best-of-3 in the Eastern Conference Final between the Tampa Bay Lightning and the New York Rangers. Tampa notched a definitive victory at home in Game 4 to square the series at two games apiece as this matchup heads back to the city that never sleeps.

Game 5 is on Thursday, June 9th at Madison Square Garden with the puck drop slated for 8:00 pm ET. The game will be broadcast on ESPN as the Rangers hope to continue the home side dominance in this series. The Lightning are -136 favorites in the Lightning vs Rangers Game 5 NHL odds.

Let’s preview this matchup and take a look at the rest of the Lightning vs Rangers Thursday NHL odds while giving you our best NHL bet and prediction for a critical Game 5.

Odds as of June 8th at Barstool Sportsbook.

Similar to how their 2nd round series against the Hurricanes played out, Madison Square Garden has been crucial to the Rangers success in this series, while they have struggled on the road. Despite owning an 8-1 home playoff record, the Blueshirts are underdogs at MSG for the 3rd time in a row this series against Tampa.

With oddsmakers listing the Rangers at +114 on the moneyline, they have an implied win probability of 46.73% to take Game 5 and move one win away from advancing in the NHL Playoff Bracket.

While the Rangers can thank Igor Shesterkin for keeping them in Game 3 until the end, Game 4 proved to be a different story. The Lightning scored under three minutes in and were in control of the game throughout, although they were outshot for the first time in the series.

Zach Bogosian toe drag leads to a Patrick Maroon goal in the eastern conference final we are officially living in the matrix pic.twitter.com/YM1PEAm56O

Patrick Maroon got the party started and their stars all added to the lead with Nikita Kucherov and Steven Stamkos giving the Lightning a safe 3-0 cushion before Ondrej Palat sealed the deal with an empty netter to go along with two helpers.

With the victory, the Lightning moved back ahead of the Rangers in the 2022 Stanley Cup odds, with the Western Conference champion Colorado Avalanche still a heavy favorite while they await their opponent.

For the first time in the series, Andrei Vasilevskiy outplayed his Russian counterpart at the other end. Shesterkin has given up three goals to Tampa in back-to-back games now. The Vezina Trophy odds favorite only gave up three or more goals once in his previous nine outings.

Nevertheless, it’s not Shesterkin the Rangers should be worried about, but the netminder they’re trying to put pucks past. While the Blueshirts found holes in Vasilevskiy in their first few games, he appears to have adjusted and is now shutting the door.

You don’t want to let the Tampa goalie get in his zone as he proved against Florida in the previous round, that he can basically win a game or even a series on his own. After giving up nine goals in the first two contests, he gave up just three combined in the Lightning’s two wins over the Rangers in Tampa.

One other key aspect to watch out for in Game 5 is the injury situation. Ryan Strome tested his lower body injury in the warmups for Game 4, but ultimately couldn’t go. To make matters worse for New York, Filip Chytil left the last game with an upper body injury. Both are questionable for Game 5.

#NYR Filip Chytil and Ryan Strome are game-time decisions for Game 5 vs. Lightning at Garden tomorrow, per Gallant.

That could be two key forwards missing from the Rangers attack. Chytil had been playing particularly well on The Kid Line with Alexis Lafreniere and Kaapo Kakko, where the Czech center was providing most of the goal scoring.

On the Tampa side, things remain status quo with regards to Brayden Point. Head coach Jon Cooper said he’d be surprised if his center was able to return to the lineup for Thursday’s contest in Manhattan.

While the Rangers are just 2-7 on the road in this postseason, Tampa has not struggled quite as badly. The Lightning are playing at a .500 level with four wins and four losses away from home so far this postseason.

With the Rangers being so successful in the jungle that is Madison Square Garden so far in these playoffs, it makes you wonder why they are once again underdogs in the Lightning vs Rangers Thursday NHL odds. They have not lost a home game in over a month and that only defeat was a triple overtime heartbreaker to the Penguins.

The @NYRangers extend their streak of home playoff wins to eight, tying the franchise record! 🗽 pic.twitter.com/czWqLcFPhx

Another strong trend to look at when making your NHL bet for this contest is the amount of times these teams have gone under the goal total. Since the beginning of the 2nd round, the record for the under in Lightning games is 7-1 while for the Rangers it’s 8-3.

In the over/under odds, making your NHL pick for Game 5 the under feels like a good play, but with the Rangers injuries adding up and Vasilevskiy holding the hot hand, I like Tampa to buck the trend of home ice dominance and win Thursday’s game. Our NHL prediction for Game 5 is the Lightning on the moneyline.