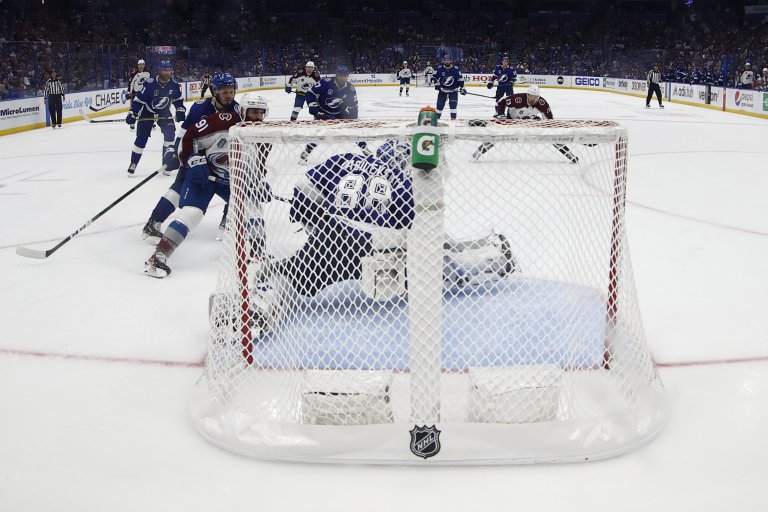 The Colorado Avalanche are -175 home favorites to defeat the Tampa Bay Lightning in Game 5 of the Stanley Cup final on Friday, June 24
A win will give the Avalanche their first Stanley Cup title since 2001
All of the Lightning vs Avalanche picks and odds are assessed in the story below

Up 3-1 on Tampa in the best-of-seven series, Colorado can close out the set with a win on home ice in Game 5. A victory would give the Avalanche their first Stanley Cup title since 2001.

Oddsmakers think that’s how things are going to play out. Colorado is a -175 home favorite for Game 5. The Avalanche are 4-0 straight up and 3-1 against the puckline in their past four home games.

The puck is slated to drop for Game 5 at 8:00 pm ET at Ball Arena on Friday, June 24. The broadcast is being provided by ABC in the US and by CBC in Canada. Colorado is a -1400 favorite in the Stanley Cup odds. Tampa Bay is at a betting line of +850 to win the Cup for the third year in a row.

NHL betting trends are displaying that the public is expecting the Avalanche to close out the series. In the puckline, 88% of bets are on Colorado. In terms of the moneyline, 63% of bets are also backing the Avs. When it comes to the total, 63% of bets like the over.

Making his first appearance since breaking his thumb in Game 3 of the Western Conference final, Colorado center Nazem Kadri scored the Game 4 overtime winner. The Avalanche are 5-1 SU in OT games in the 2022 playoffs.

Colorado has nine come-from-behind wins. That’s one shy of the Stanley Cup record of 10 set by the 2009 Pittsburgh Penguins. The Avalanche have made 15 third-period comebacks this season. Colorado forward Mikko Rantanen has eight assists in the final series. He’s riding an eight-game point streak.

Mikko Rantanen has 8⃣ ? in the 2022 #StanleyCup Final, one shy of the official record for the series.

In addition, Wayne Gretzky had 10 assists in the 1988 Final, with two coming in the suspended game and thus not part of the official record.#NHLStats: https://t.co/UYiVo35xxc pic.twitter.com/rmo1lRTBZa

Special teams are crushing Tampa Bay’s hopes of rallying in this series. So far in the Stanley Cup final, the Lightning are 1-for-14 with the man advantage. At the same time, the Tampa Bay penalty killers have allowed six Colorado goals on 13 power-play attempts. Defenseman Victor Hedman’s Game 4 goal was his first for the Lightning in 15 playoff games.

Lightning defenseman Erik Cernak (lower-body injury) is questionable for Game 5. He left Game 4 after blocking a shot with his right knee. Forward Anthony Cirelli finished the game after suffering a skate cut to the hand. However, he was unable to take faceoffs.

Jon Cooper didn’t have updates on Erik Cernak, Anthony Cirelli. Asked if Point would be available for Game 5, he said to circle back tomorrow

Roll Out Those Vasilevskiy Elimination-Game Numbers

This will be the fourth time during the the past three playoff years that Tampa Bay is facing elimination.

Another one for the history books for Andrei Vasilevskiy when the puck drops tonight. The Big Cat continues to find himself in good company. #GoBolts pic.twitter.com/EzgMX5smV3

In three previous games in that scenario, Lightning goalie Andrei Vasilevskiy is 3-0 with a 1.33 goals-against average and a .949 save percentage.

In Game 4, Colorado’s Darcy Kuemper became the first goaltender in NHL history with an overtime assist in a Stanley Cup final game.

Darcy Kuemper is the first goaltender in NHL history with an OT assist in a #StanleyCup Final game ⛰ @Avalanche pic.twitter.com/0CXAQoeWy8

Kuemper hasn’t allowed a third-period or overtime goal during the Stanley Cup final.

The Lightning are proud two-time defending champions. They won’t go down without a fight. At the same time, they are a beaten-down bunch. Injuries haven’t been able to break Tampa Bay’s will or spirit, but they have taken much of the ability to compete out of the squad.

Colorado is on the verge of a coronation. It should come Friday on home ice.