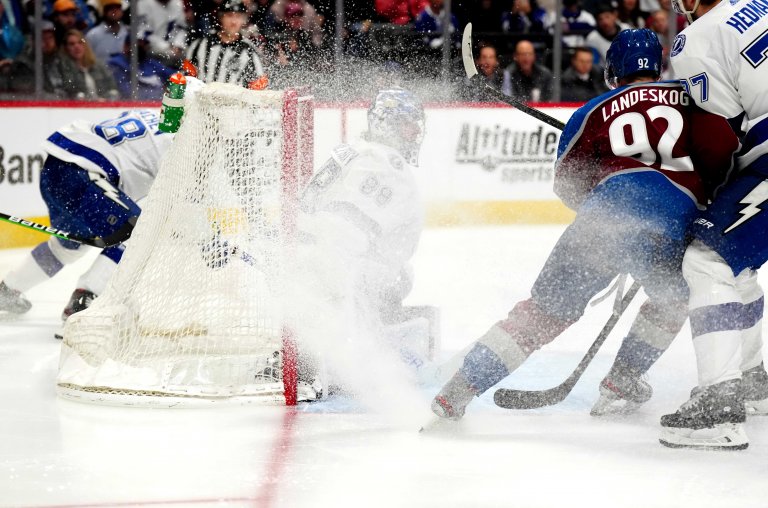 The Colorado Avalanche are -160 home favorites to beat the Tampa Bay Lightning in Game 1 of the Stanley Cup final on Wednesday, June 15
Colorado is 3-0 straight up at home in Game 1 of playoff series this spring
Below, see the Lightning vs Avalanche odds and picks for Game 1

There’s a symmetry at work as the Stanley Cup final between the Colorado Avalanche and Tampa Bay Lightning prepares to get underway.

In the spring of 2015, an upstart group of Tampa Bay Lightning, for whom great things were projected, arrived at the Stanley Cup final to face a Chicago Blackhawks team seeking its third Stanley Cup since 2010. Chicago won the series in six games,

This spring, it’s the Lightning seeking their third Stanley Cup since 2020. And it’s the Avs who are viewed as the team projected to be headed toward greatness. The difference this time around is that it’s the newbies that the oddsmakers are forecasting for success in the NHL betting lines. Colorado is the favorite in the Stanley Cup odds. The Avalanche are also the -160 chalk to emerge victorious in Game 1.

The puck is slated to drop for Game 1 at 8:00 pm ET at Ball Arena on Wednesday, June 15. The broadcast is being provided by ABC in the US and by CBC in Canada. Tampa Bay is 1-2 straight up on the road in Game 1 in these playoffs.

NHL betting trends show the public to be of different minds. In spread betting,  84% of the bets placed are on the Lightning at +1.5. Moneyline players are more bullish on the Avs. Those splits show 60% of the moneyline bets are on the Avalanche at -160 odds. Public bettors are also anticipating goals. There is 86% of the public bets on the Over (6).

Avalanche defenseman Cale Makar, favored in the Norris Trophy odds, will be playing his 50th Stanley Cup game. He’s collected 53 points so far. In NHL playoff history, Bobby Orr (66) and Brian Leetch (65) are the only defensemen with more points through their first 50 NHL games.

Makar (1.08) is among five players in this series averaging more than a point per game during the Stanley Cup careers. The others are Colorado’s Nathan MacKinnon (1.36) and Mikko Rantanen (1.21) and Tampa Bay’s Nikita Kucherov (1.15) and Brayden Point (1.04).

Lightning forward Point has been out since round one with a leg injury. Bolts coach Jon Cooper is expecting Point to play in this series but probably not in Game 1. Defenseman Brent Seabrook (shoulder) is out.

Avalanche star, Nazem Kadri had surgery to repair an injured thumb sustained in the hit by Evander Kane early in game 3. Kadri is unlikely to be available for the remainder of the postseason, but isn’t being ruled out officially.

Vasilevskiy Is Money When It Counts

In his last 11 games facing elimination, Lightning netminder Andrei Vasilevskiy is 11-0. He’s posted six shutouts over that span and a save percentage in excess of .980.

Vasilevskiy is Russian for “Crush your dreams”

Find me a more clutch athlete in sports today pic.twitter.com/KCwt8AwoHK

However, he’s 1-3-1 in five games against Colorado. Vasilevskiy is showing a 3.41 goals-against average and .877 save percentage in those games.

Even though backup Pavel Francouz is unbeaten in two stints stepping in for the injured Darcy Kuemper during postseason play, now that Kuemper is again healthy, Avs coach Jared Bednar is insisting he’s again his goalie.

Colorado has been money in the playoffs when it comes to Game 1. The Avs have opened all three previous rounds on home ice. They are 3-0 SU and 2-1 against the puckline. Colorado has outscored the opposition 18-11 in Game 1.

On the other hand, Tampa Bay hasn’t enjoyed the Game 1 experience for the most part. The Lightning lost two of three Game 1 contests so far. In their two setbacks, the Bolts were outscored 11-2.