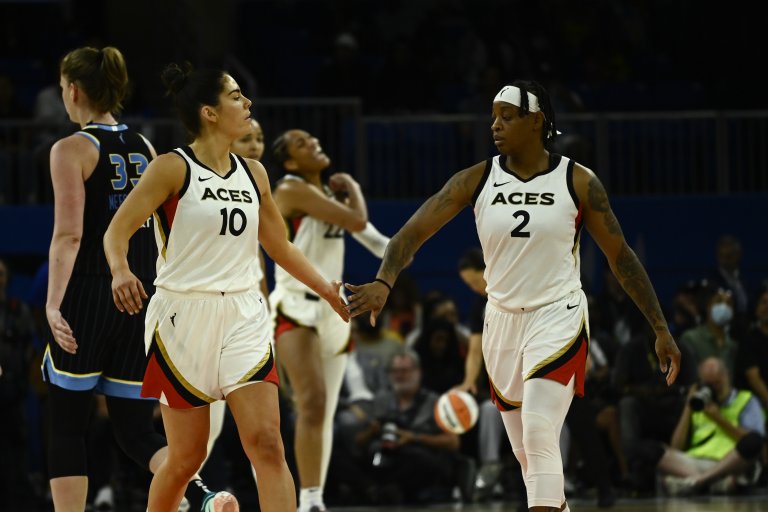 The Las Vegas Aces visit the Seattle Storm at 3pm ET on Sunday, August 7th
Las Vegas enters the game at 22-10 overall, while Seattle comes in at 20-12 on the year
See below for the latest Aces vs Storm vs odds, analysis and best bet

Two of the top teams in the WNBA square off Sunday, August 7th. The Las Vegas Aces travel to take on the Seattle Storm at 3pm ET at Climate Pledge Arena in Seattle. ABC will air the game nationally.

The Aces come into the game with a record of 22-10 overall to sit as a top three team in the league standings. Las Vegas, which is 7-3 over its last 10 games, is coming off an 82-80 loss to the Dallas Wings on Thursday in Texas.

Odds as of August 6th from FanDuel

The Storm enter with a record of 20-12 on the year and among the top five teams in the WNBA standings. While holding a record of 6-4 over its last 10 contests, Seattle most recently beat the Minnesota Lynx 89-77 on Wednesday in Seattle.

Both Las Vegas and Seattle have clinched spots in the WNBA Playoffs, but will be battling for seeding in the postseason Sunday.

The Aces enter the game tied with the Connecticut Sun for second place in the league standings with four games remaining, sitting two games back of the top-seeded Chicago Sky and two games ahead of Seattle as the fourth seed.

With their win against Washington, the @seattlestorm have officially clinched a spot in the WNBA playoffs for the 7th consecutive season ? pic.twitter.com/Na3zTFShUi

The Storm, one of the top four teams in the standings entering Sunday, will try to create some space between them and the Washington Mystics in the fifth spot with four games left. Seattle, sitting two games back of both Las Vegas and Connecticut, hold just a half-game lead over Washington for fourth.

Although they will already be in the playoffs, this game still is an important one for Las Vegas and Seattle on Sunday.

Not only is Sunday’s contest a showcase of two top-five teams in the league, but it could be a preview of a possible championship matchup in the WNBA Finals.

Las Vegas are title favorites according to DraftKings Sportsbook, having odds of +180 as the playoffs approach. Seattle, on the other hand, is tied with Connecticut for the third-best odds at +500.

Sportsbooks believe these are two of the top teams in the WNBA that could ultimately battle for a championship, and Sunday could be a preview to that WNBA Finals series in September.

One major key to the game Sunday will simply be which team’s strength will overpower the other. Seattle has been the top defensive team in the league, while Las Vegas has been the best offensive squad in the WNBA.

The Storm enter Sunday with a league-leading defensive rating of 95.5, allowing opponents to score 76.7 points on average a game. The Aces come in with a WNBA-best offensive rating of 108.6, averaging 89.8 points per contest.

It will be entertaining to see those two strength go against each other in the game.

Another aspect to watch is the rebounding battle in the contest, an area Las Vegas has owned in the two matchups thus far. The Aces, who rank third in the WNBA with 35.7 rebounds per game, have averaged 42.5 rebounds a game against Seattle this year.

The Storm, who rank 10th with 33.2 per contest, have averaged 31.5 rebounds a game against Las Vegas in two contests.

On Sunday in Seattle, this contest will likely come down to the wire in a high-energy playing environment. Things will be amped up and energized in the final regular season home game for legendary Storm point guard Sue Bird.

In the game which will likely be decided by single digits, expect Seattle to continue its recent wave of strong play while using the home fans to its advantage against a talented Las Vegas squad. The Aces will be hungry for a win to end a two-game skid, but the Storm will be too tough to top at home.

For the best bet of the night, go with the Storm covering the 1.5-point spread listed. This will be a close game, but will be decided by more than 1.5 points.