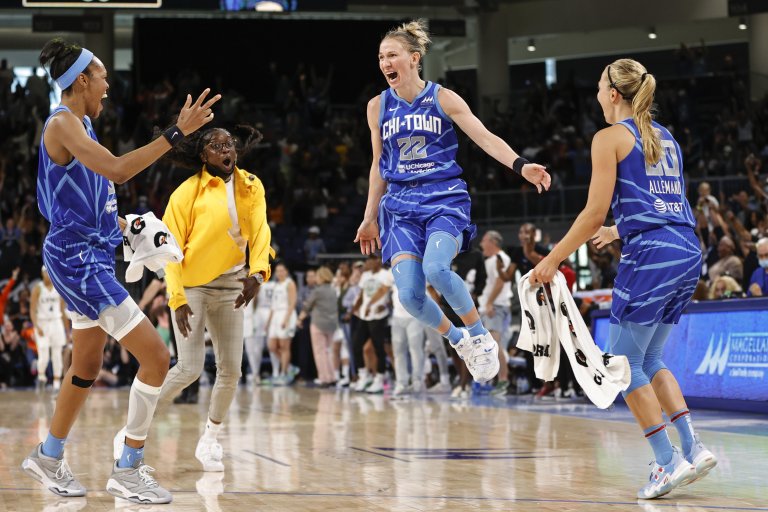 The Chicago Sky are 2-point home favorites over the Las Vegas Aces in a WNBA game scheduled for Tuesday, July 26
Las Vegas is the +180 favorite to win the 2022-23 WNBA title
Defending champion Chicago is set as the second choice in this betting market at +200

The top two teams in the WNBA will be clashing Tuesday as the Chicago Sky (21-7) plays host to the Las Vegas Aces (20-8). It’s the defending champion Sky who are leading the East with the WNBA’s best record. Las Vegas is topping the West standings with the league’s second-best record.

In WNBA betting, oddsmakers are liking the Sky to carry the day in this big tilt. Chicago is set as a 2-point home favorite. The Sky won 104-95 at Las Vegas on June 21. The Aces were 73-65 winners June 3 at Chicago

Tipoff for this game at Wintrust Arena is set for 8:30 pm ET on Tuesday, July 26. Stream all the action on Amazon Prime Video.

At a moneyline of -130, the Sky are given an implied probability of victory of 55.52. Bet $10 on Chicago to win this game and if the Sky goes to the limit and comes away victorious, then you’ll pocket a payout of $17.70.

While Chicago is favored to take this tilt, in WNBA future book betting, it’s the Aces who are coming up aces in the WNBA championship odds. Las Vegas is the +180 chalk to win the title. The reigning champs from the Second City are the second choice in this betting market at +200.

Back at home tomorrow, and playing for some hardware while doing so 🏆

The Sky Is the Limit

A year ago when they entered postseason play with a 16-16 regular-season mark, no one was touting the Sky as WNBA title contenders. Yet at the end of the playoffs, Chicago was the team holding the championship trophy aloft.

You guys might enjoy #1 of our most recent Top Plays, @justnfields and @ChicagoBears… 👀#skytown | @BMOHarrisBank pic.twitter.com/24vjxPbITD

Fast forward a year and almost everyone is touting the Sky as the team to beat in the WNBA. Four Chicago players – Candace Parker, Courtney Vandersloot, Kahleah Copper and Emma Meesseman – were selected to play in the midseason WNBA All-Star Game.

Aces Can Score the Basketball

Las Vegas is the most productive team in the WNBA. The Aces top the league in both points per game (90.4) and offensive rating (108.3).

Chicago is the #2 scoring offense in the league at 85.6 PPG. Seven Sky players are averaging between 14.8 and 9.0 PPG. Parker has recorded two triple-doubles this season.

Moving up on All-Time lists is just simply light work for her at this rate. pic.twitter.com/uPIvikSb5O

It’s that depth of scoring which tends to be the difference maker for Chicago. The last six games saw the Sky going 5-1 even though all-star guard Vandersloot (concussion) was missing the past four games. She practiced Monday but her status for Tuesday remains uncertain.

Las Vegas was 13-2 on the season when the Aces blew a 28-point lead in that June 21 home-court loss to Chicago. That was the biggest comeback in WNBA history.

After that game, the Aces went 2-5 up to the all-star break. Like the Sky, they’re 5-1 over the past six games.

Chicago is the deeper team and the better defensive squad. And the Sky are at home. Take Chicago and lay the two points.