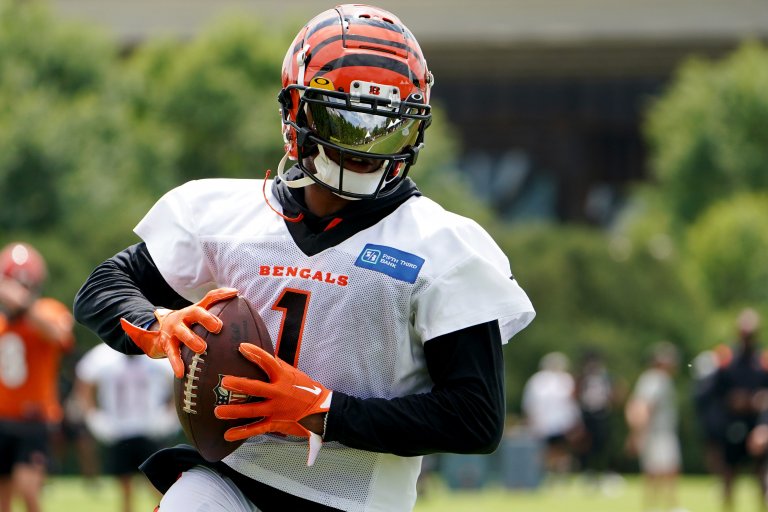 Cooper Kupp of the Los Angeles Rams and Ja’Marr Chase of the Cincinnati Bengals are the +500 co-betting favorites to lead the NFL in receiving TDs during the 2022 season
Kupp caught a league-leading 16 passes for TDs last season
Since 2008, 20 different players have grabbed at least a share of the NFL lead in TD catches

If there’s one constant when it comes to the NFL leader in receiving TDs, it’s change. Not only is it rare for a champ to defend his title in this statistical category, it’s almost as rare for a player to lead in receiving TDs twice during their NFL careers.

In fact, there isn’t a single active receiver in the NFL who’s led the league in TD catches more than once. The most recent player to do so, two-time winner Larry Fitzgerald, played his last NFL season in 2020.

What does this all mean? Well, perhaps you should immediately rule out all active players who were past leaders from your NFL betting strategies.

However, oddsmakers aren’t doing so. Last season’s leader, Cooper Kupp of the Los Angeles Rams, is the co-betting favorite to repeat as the NFL leader in receiving TDs along with Ja’Marr Chase of the Cincinnati Bengals.

Davante Adams, the 2020 receiving TDs leader with the Green Bay Packers, is the +750 fourth betting choice in this market. He’ll be playing for the Las Vegas Raiders in 2022.

Fitzgerald, in 2008-09, was the last receiver to lead in TD catches in successive seasons.

At odds of +500, co-favorites Kupp and Chase are offering an implied probability of 16.67%. Bet $10 on either of them and if they finish the season as the leader, would return a payout on that wager of $60.00.

In what can only be described as a once-in-a-career year, Kupp turned the NFL receiving trifecta. He led the league in overall receptions, TD receptions, and receiving yardage. Kupp drew strong consideration in the NFL MVP odds.

The chances of that happening two years in a row are less than remote. And as noted above, Kupp will be needing to defy plenty of NFL history in order to lead in receiving TDs two seasons in a row.

Maybe keep an eye on Kupp’s new Rams teammate Allen Robinson. He led the NFL in receiving TDs with the Jacksonville Jaguars in 2015. Rams QB Matthew Stafford has passed to three receivers who led the NFL in TD catches.

Chase was a rookie sensation with the Bengals last season. Like Kupp, can he repeat that level of performance?

Ja’Marr Chase told me he worked out with Chad Johnson in the offseason.

“We talk about routes and stuff like that. He tells me what I’m good at and what I can work on.”

Said he’s put an emphasis on having that relationship with Chad.#Bengals @fox19

The Bengals snuck up on a lot of teams last season. After winning the AFC Championship Game and going to the Super Bowl, look for a regression in Cincinnati that could impact everyone.

Chase’s LSU teammate Justin Jefferson has taken an uptick in both of his seasons with the Minnesota Vikings. His catches went from 88 as a rookie to 108 last season. Meanwhile, his receiving TDs increased from seven to 10.

Justin Jefferson cooking Patrick Peterson on an out route: pic.twitter.com/wDP8oeX3RJ

Jefferson led the NFL with 14.3 yards per touch last season. The Vikings figure to take another step forward as a team this season with a deeper roster and better coaching staff.

Jefferson could be a big benefactor of that improvement. The offense is being tweaked to allow Jefferson to freestyle in a similar fashion to what the Rams did last season with Kupp.

Keep An Eye On Pittman

Michael Pittman Jr of the Indianapolis Colts made a quantum leap as a sophomore in 2021 as well. He went from 40 catches to 88 and from one TD catch to six.

Michael Pittman Jr. was an absolute dog last year against single-man coverage, creating a step or more of separation on 66% of his opportunities.

He’ll be getting on the end of passes from future Hall of Famer Matt Ryan this season and could be in for a major breakout campaign.