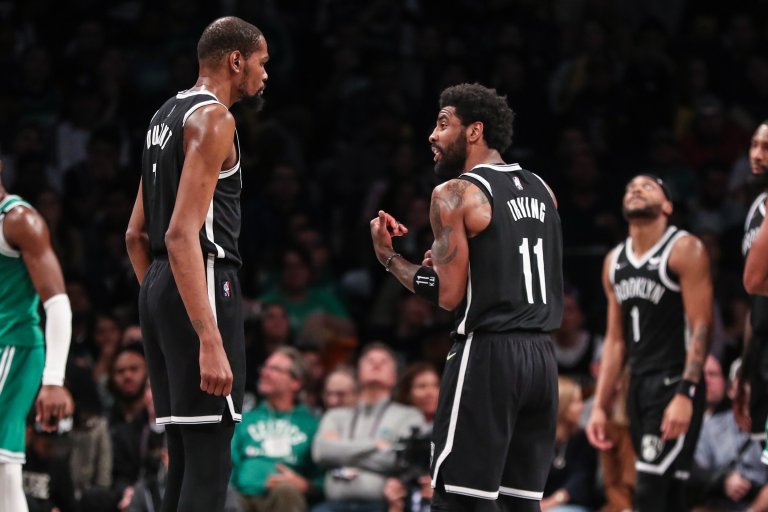 Both Kevin Durant and Kyrie Irving face uncertain futures with the Brooklyn Nets
With that in mind, there are some intriguing PPG player props available for the star duo, regardless of where they play in 2022-23
Read on for the odds and analysis

Kevin Durant’s trade request last week sent the NBA world into a frenzy prior to Free Agency. The Brooklyn Nets are waiting for the best possible offer for their superstar though, while Kyrie Irving is essentially in the same boat, although Brooklyn won’t fetch as much in a deal for the guard. Amid the drama, their NBA Championship odds have dropped to +2700.

Nevertheless, DraftKings has already released a few intriguing points per game player props for KD and Irving, with Durant being favored to outscore Kyrie next season, regardless of where he plays. But, that should definitely play a factor for both players.

Odds as of July 5th at DraftKings.

This one makes a ton of sense. Durant averaged 29.9 points in 55 games for the Nets last season as their No. 1 option. No matter where he plays next, whether it’s still at the Barclays Center or elsewhere, KD is going to be the main man. We’re talking about one of the greatest scorers to ever step on a basketball court.

“Let me channel my inner Brian Windhorst… I think Kevin Durant is doing this as a scare tactic to help Kyrie Irving have the leverage to get him sign long term with the Brooklyn Nets.”

As for Irving, the only way he becomes the main star is if Durant leaves the Nets and Kyrie stays put. It’s possible, but regardless, I don’t see him averaging more points than KD. In 29 contests in 2021-22, the former number one overall pick put up 27.4 points per night.

The Nets *could* just run it back.

Statistically, Durant has always scored more than his current teammate. No matter the circumstances by the time October rolls around, that will continue. There’s big NBA betting value here.

There’s only the yes option here at +330, but it’s understandable why. They’d both have to average a minimum of 27 points each per night, which is certainly possible, but not a guarantee by any means.

KD is going to ball out wherever he plays and likely put up nearly 30 a game. He’s just that good. If Kyrie goes to the Lakers like the rumors are saying, although there hasn’t been much traction in negotiations, he won’t be option number one. It’ll be LeBron James then him and Anthony Davis.

The Nets are operating under the possibility Kyrie Irving and Kevin Durant could be on the roster opening night, @ShamsCharania tells @PatMcAfeeShow

They will not move KD until “the price is met” pic.twitter.com/6xsxUEEFNa

This pick also comes down to health and availability. Does Irving actually play a full season drama-free? If so, he’s surely going to perform like we all know he can. The veteran has averaged right around 27 points in each of the last three seasons, although it was in limited playing time.

Honestly, this is worth a sprinkle at +340. It doesn’t hurt.

27+ Points Per Game Each Odds

This is similar to the last, but again, we can look at past statistics to determine the possibility of both KD and Kyrie averaging 27+ points. Durant missed all of 2019/20 and a lot of the next season due to injuries. He dropped 26.9 points in 2020/21 in 35 outings.

ESPN’s @BobbyMarks42 says the #Raptors are the “leader of the clubhouse” for Kevin Durant.

“For me, it’s all about Toronto.” pic.twitter.com/RMfWqPOprL

In fact, he hasn’t gone over 27 per contest since his last year in OKC because as we know, he had to share the rock a lot more in Golden State. If Durant ends up in Phoenix, he’ll be splitting the scoring load with Devin Booker but he’ll likely become the primary option still. KD looked like his old self last season and should have no problem averaging close to 30 again.

As for Kyrie, as previously mentioned, he collected more than 27 points in two of the last three campaigns. Again, it was in limited action because of his numerous absences, but this prop is simply based on his average, as long as he plays a minimum of 41 games. That shouldn’t be difficult considering there are no vaccine mandates anymore.

There is just a yes option here. Just like the last one, it’s worth a small bet.