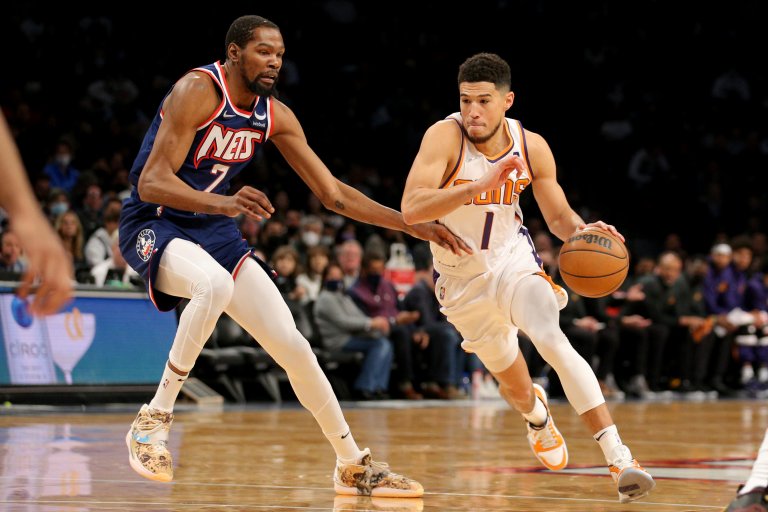 Kevin Durant has asked the Brooklyn Nets for a trade, which means there are a boatload of teams looking to make a move for the 12-time All-Star
The Suns are currently the frontrunners to land him, while the Heat, Sixers, Bulls, and even the Nets are in the mix
Where will KD end up? Find the odds and analysis below

Just before 2022 NBA Free Agency opened up on Thursday, Kevin Durant shocked the basketball world by asking the Brooklyn Nets for a trade. It came as a huge surprise considering Kyrie Irving just opted into his player option for next season, but now it appears both stars will find themselves in new uniforms come October.

With arguably the best player in the league now available, numerous teams will be trying to put together an enticing enough package to acquire KD from the Nets. But, as of right now, the Phoenix Suns are the favorite at DraftKings to land him.

Odds as of June 30th at DraftKings.

KD made it clear there are a number of different teams he’d like to play for next. The Suns were one, which is why it’s no surprise they’re at a short -200. Coming off a disappointing early exit in the playoffs after winning 64 games in the regular season, Phoenix has every reason to try and go after Durant.

Devin Booker is an absolute star and isn’t even in his prime yet and while Chris Paul is still a wizard with the rock, he’s getting older. Add Durant to the mix and you have a Big 3 in the desert and another legitimate scoring weapon alongside Book.

However, there were early reports that Brooklyn wanted Booker in any deal for KD. That’s just simply not going to happen, and the Nets will quickly realize it. A package of Deandre Ayton, Mikal Bridges, and multiple first-rounders could move the needle for the Nets, though. Yes, the Suns would lose two pieces of their starting five, but it seems likely they’re not willing to hand Ayton a max extension, anyway.

In fact, just since the news dropped that KD is interested in Phoenix, their NBA Championship Odds have already improved from +1000 to +600, which is top dog with the Golden State Warriors. Phoenix instantly becomes title contenders with Durant wreaking havoc on a nightly basis.

Miami is one of Durant’s preferred destinations as well and they sit at +900 odds. The idea of pairing up with Jimmy Butler and Bam Adebayo would be intriguing to the Nets star. To be honest, there isn’t really any team KD goes to and doesn’t instantly fit in. He’s such a pure scorer and could give the Heat a true superstar.

Bam actually can’t be involved in a trade with Brooklyn unless Ben Simmons leaves the team first due to a rule that prevents more than one player who is playing on a rookie max deal to be acquired via trade. Therefore, the Nets are likely to ask for a package like Tyler Herro, Duncan Robinson, and maybe even Kyle Lowry, plus multiple draft picks. They certainly have enough talent to make this happen.

“The Miami Heat have a lot of big salaries that can be used to facilitate [a trade]… Don’t include Bam Adebayo because of some complex salary rules. They couldn’t be traded for each other.”@WindhorstESPN on the Heat trading for Kevin Durant

If the Heat did become KD’s next team, they’d also be a serious threat to not only win the East again but capture a Larry O’Brien.

Where Will he End up?

The Nets (+700), Sixers (+800), and Bulls (+900) are all possibilities. It feels unlikely Durant would go and play with Harden again, but the idea of teaming up with Joel Embiid is tantalizing.

Nonetheless, I truly believe he’s going to end up in Phoenix. Sources close to Brian Windhorst, Woj, and Stephen A. Smith all claim he’s had his eye on the Suns and they won’t be hesitant to bring a player like him to this franchise. At -200, it’s worth a bet.