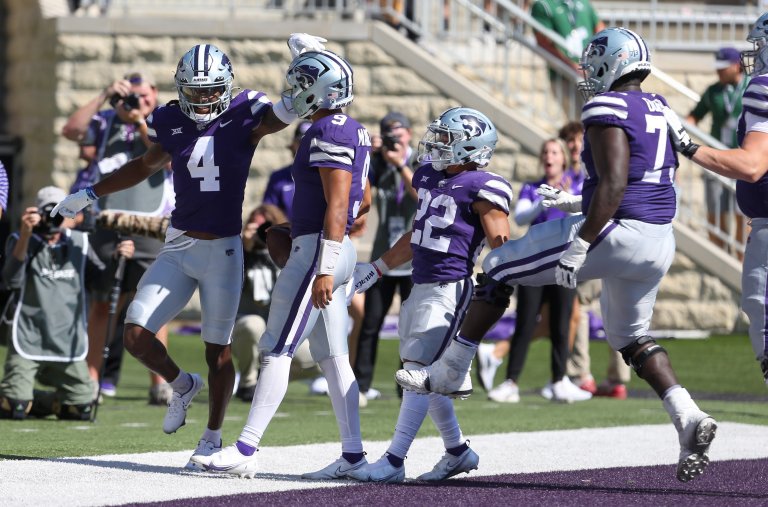 No. 20 Kansas State and Iowa State face off Saturday night in Week 6 on October 8th
The Cyclones are currently 2-point betting underdogs against the Wildcats in the CFB odds
Read below for Kansas State vs Iowa State odds, spread and best bet for Week 6

This Big-12 college football tilt has Iowa State at home to take on the No. 20 (in the AP poll) Kansas State Wildcats on Saturday, October 8. Kickoff is set for just after 7:30 PM ET at Jack Trice Stadium, and the game will be live on ESPN. Kansas State will be trying to raise its record to 5-1 while Iowa State tries to win its first game in the conference (3-2, 0-2 in the Big 12).

Kansas State is now a 2-point betting favorite and the total is set at 45.5 for this contest. The Cyclones are slight home underdogs.

Let’s roll into the Kansas State vs Iowa State odds and offer you our best bets and predictions.

Odds as of October 4th at BetMGM.

Kansas State is -130 on the moneyline in the college football odds, giving them a 56.5% implied probability to win. Also, do not forget about those Kansas sports betting promos.

After a nine-point road win, the Kansas State Wildcats have to feel pretty good about themselves. Now, they face an Iowa State Cyclones stinging from a 14-11 defeat against Kansas at home last Saturday. Kansas was only expected to win a few games this season and Iowa State felt like they should have beaten an undefeated Jayhawks team.

However, the Wildcats are an impressive 4-1 ATS whereas the Cyclones are just 2-3.

Kansas State did put up 37 points against Texas Tech this past Saturday. Then again, Iowa State is an under waiting to happen. Two of the last three games have gone way under. There is a possibility the Wildcats might have to generate their own offense. That being said, Kansas State did just fine there. Between Adrian Martinez and Deuce Vaughn, the Wildcats have racked up more than 1100 yards rushing and 12 touchdowns on the ground.

It is that rushing attack of the Wildcats that scares teams. Martinez typically will not beat the opposition through the air as he is averaging a shade under 140 yards a contest this season. Since the Wildcats’ ground game is one of the best in the nation at 267.5 yards per contest, they do not have to do much else.

On offense, Adrian Martinez has been a defensive nightmare crossing the end zone seven times in his last two games alone. Add in the 319 yards rushing over that span and Iowa State has a good deal to think about. When a team can go over 170 yards with two players, that is scary.

The defense may be able to force a few mistakes from Iowa State. The Cyclones turned the ball over twice, missed three field goals, and literally gave the game away last Saturday to Kansas. Kansas only got 112 yards rushing but did score two key touchdowns.

Head coach Matt Campbell is seeing his team falter against tougher competition. They cannot get past those one-score games. In both losses, this season, the Cyclones lost by a combined ten points. Even the game against Iowa was one they nearly squandered. The Cyclones won 10-7 but even Hunter Dekkers later said, “it almost felt like a loss but we’ll take it”.

Iowa State knows its schedule does not get any easier. They need a win. After Kansas State, they face, Texas, Oklahoma, Oklahoma State, Texas Tech, and TCU. That is a rough second half.

Peterson: Is Iowa State to the point where the defense must score touchdowns? https://t.co/QpkxR1dYfq via @DMRegister

Can Iowa State stop the errors and start putting up more points with their offense? How long can their defense hold up before they crack a bit like they did versus Baylor (31 points allowed)? Kansas State is a different animal with that rushing attack.

Iowa State’s projected NCAAF win total of 6.5 is starting to look too high.

Iowa State expects to fall further in the conference.

Kansas State is one of those teams that could eventually find success running against Iowa State then go over the top with a pass or two.

Two points is not a huge spread for Kansas State who can control the clock.