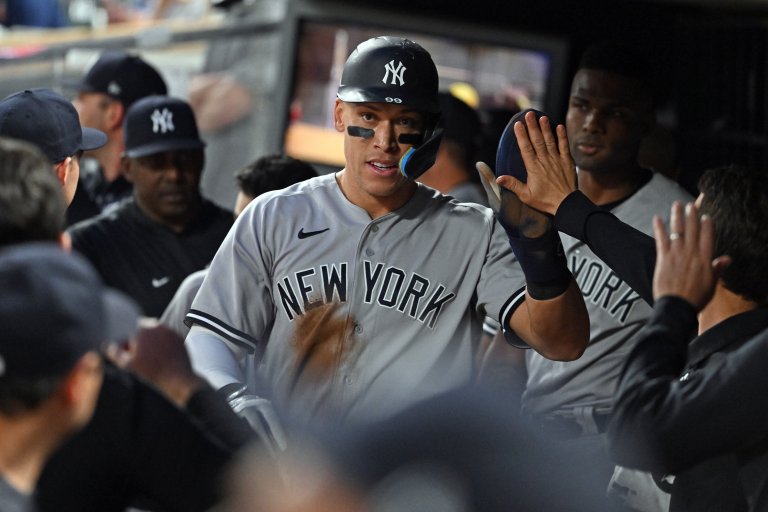 Aaron Judge boasts an MLB-leading 1.054 OPS
The Yankees slugger is dominating the AL MVP discussion and is rising in the AL MVP odds
Is Judge en route to his first career MVP award?

Following a stretch of seven games that has seen Aaron Judge slash .321/.424/.679 with three home runs and six RBIs, the New York Yankees slugger has now passed Shohei Ohtani as the betting favorite in the AL MVP odds to win the American League MVP this season.

Judge is currently leading all major league hitters in both OPS (1.054) and home runs (22). Plus, the Yankees have the best record in baseball at 41-16. He’s the best player on the best team, making his recent surge past the before-mentioned Ohtani make perfect sense from an MLB odds perspective.

Odds from June 10 at Caesars Sportsbook. Check out these Caesar Sportsbook bonuses before betting on MLB as well

As you can see in the table above, the odds are still extremely tight between the top four performers in the American League. Judge and Jose Ramirez are separated by very little in the AL MVP odds. Judge is listed at +150, giving him an implied probability of 40-percent to win the award. While, the fourth favorite, Jose Ramirez is listed at +800 odds. This is a fairly small amount when discussing an award that won’t be voted on until another 100+ games have passed.

Ohtani and Mike Trout, who sit second and third in the AL MVP race, respectfully, are both capable of going on a month-long tear that immediately inserts them back into the top spot. The LA Angels have been slumping as of late. However, they’re due to rattle off some wins. Ohtani, in particular, will always be a major threat to Judge due to his two-way player status.

At the start of the 2022 MLB season, Ohtani and Trout were identified as the clear-cut favorites to take home the AL MVP award. Ohtani began the season at +300 and Trout at +350. The next closest player was Vladimir Guerrero at +400 (who has since dropped out of the top five altogether). However, over the past few weeks, the MLB MVP odds have begun to favor Judge in the AL.

For much of April, Ohtani and Trout remained the top betting favorites thanks to the Angels’ hot start. Jose Ramirez and his 1.007 OPS entered the picture in late April/early May, seeing his odds dip as low as +1050 before beginning to climb back up.

It’s no surprise to see such an abrupt change in the voting odds during this timeframe. Judge is slashing .322/.400/.696 with 13 home runs and 26 RBIs over his last 30 games played. That’s nearly a run batted in per game.

The Yankees are also second in World Series odds at +500 and first in AL pennant odds at +235, which are only helping Judge’s case to win AL MVP this season.

Aaron Judge is on pace to beat the Yankees single-season Home Run record.

With the LA Angels in a major slump, now could be the perfect time to pick up some value on Ohtani and Trout, who began the season as the top betting favorites.

Guerrero Jr at +2000 is another really good bet to keep an eye on here. His current .242 average and .800 OPS is not what we’re accustomed to seeing from Vladdy Jr. However, it’s only a matter of time before he goes on an absolute tear and his MVP odds start improving. Getting +2000 on last season’s MVP runner-up is a bargain no matter how you slice it.

In terms of potential bad bets, Jose Ramirez is the one player I’d stay away from here. He started the year red hot but has started slipping since then. He’s batting just .250 over his last 30 games played and the Guardians are starting to creep toward below .500 in the standings.