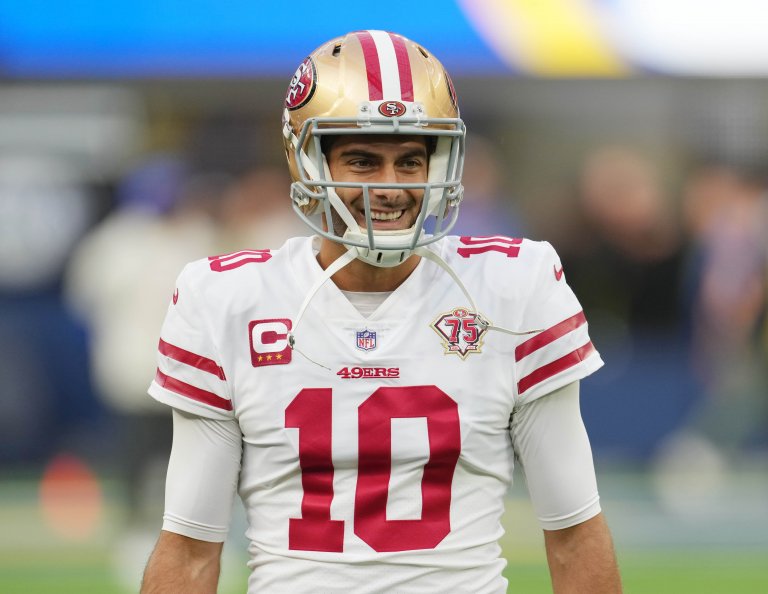 Jimmy Garoppolo is searching for a new home and oddsmakers have pegged Seattle as his most likely landing spot
The Texans boast the next shortest odds to acquire the QB, but there’s reason to believe neither them or the Seahawks are a likely destination
Read below for odds and analysis on Garoppolo’s next team plus a betting prediction

The San Francisco 49ers have made it clear they don’t intend on having Jimmy Garoppolo on their roster this year. San Fran confirmed on Tuesday the team has moved on to Trey Lance and won’t have Garoppolo at practice as long as he remains with the organization.

The question now becomes, where is he likely to land? In theory there should be plenty of teams interested in a quarterback with a 33-14 career record as a starter, however you can poke holes in the majority of his most likely destinations according to oddsmakers, especially at the top of the board.

Odds as of July 26th at DraftKings Sportsbook

Seattle is listed as the favorite in this NFL betting market, with Houston closely behind. There’s been plenty of rumors circulating this week about a Garoppolo move to the Seahawks, but it just doesn’t make sense for a variety of reasons.

Don’t get me wrong, the Seahawks definitely could use an upgrade at QB. No team would feel confident heading into the season with Drew Lock and Geno Smith as their numbers 1 and 1a, however that’s where Seattle finds itself.

Garoppolo seemingly would be a nice fit with head coach Pete Carroll, as the Seahawks want to establish the run arguably as much as the 49ers did last year. Part of what makes Garoppolo successful is his play action passing proficiency which only works if the defense is threatened by a strong run game.

Jimmy Garoppolo is now allowed to seek trade to other teams by the #49ers, according to @AdamSchefter

Logical locations would be the #Seahawks or the #Browns is Watson is suspended long-term.

But, Seattle should actually be doing everything they can to not be competitive next season. Next year’s QB class is absolutely loaded with future NFL’ers and the Seahawks would benefit more from a better draft position than the extra couple victories Garoppolo could provide.

If you’re the 49ers, yes you want to get rid of Jimmy G but the last thing you want to do is trade him within your own division. They’d look incredibly foolish if by chance his career ascends in Seattle and Lance falters.

Finally there’s the money issue. Any team that trades for Garoppolo will have to take on his $24.2 million base salary, plus per-game roster bonuses worth up to 800K. Not exactly something a rebuilding franchise should look to do.

Garoppolo Not a Serious Target for Texans

Speaking of rebuilding, that’s where Houston finds itself as well. Bringing in Garoppolo’s contract wouldn’t be wise for financial reasons, but also for the unexpected success of rookie Davis Mills.

The third round pick wildly exceeded expectations in year one, completing 67% of his passes and posting five multi-touchdown games. He led a Houston team devoid of talent to victories in two of its final four games, including a win over a heavily favored Chargers squad.

The Texans are expected to be more competitive in 2022, but the potential upgrade from Mills to Garoppolo is not going to all of a sudden make them a playoff contender. Houston will continue to build around a very affordable Mills.

The team that should be targeting Garoppolo is Cleveland. The Browns were the NFL’s fourth highest graded rushing offense last season, and inserting Jimmy G into the mix if Deshaun Watson is suspended for the entire year could salvage their season.

Most passing yards per attempt on play-action by NFC West QBs in 2019:

Cleveland’s roster is ready to win now and Garoppolo would excel in Kevin Stefanski’s system. He’d gobble up yards on play action passes and a heavy dose of short to intermediate crossing routes.

They might have to get creative to make the salary work, but Garoppolo is a major upgrade over his former teammate and projected starter Jacoby Brissett. The latter averaged nearly three full yards less per attempt last season (5.7 vs 8.4) and is 14-23 lifetime as a starter.

If Watson is suspended for any significant time expect the Garoppolo to Cleveland rumors to intensify. We can get ahead of that by grabbing the Browns as his most likely team at +500.