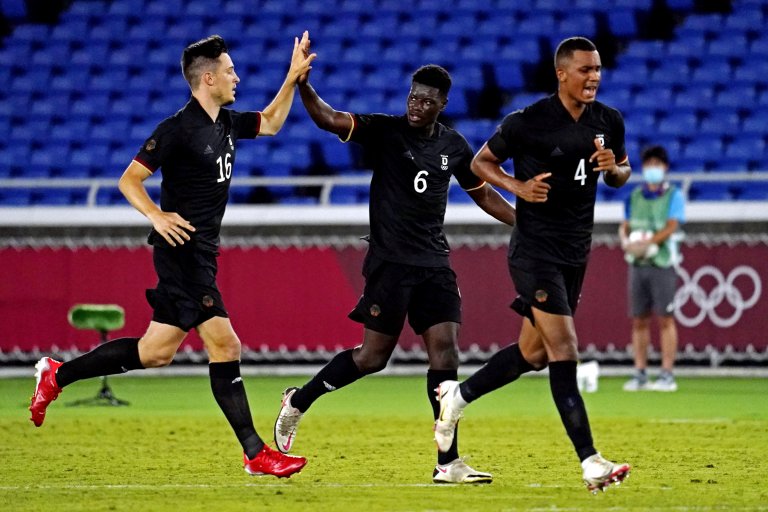 Italy takes on Germany in Bologna in Nations League on Saturday, June 4th at 2:45 pm ET
The visitors are a slight +138 favorite in the match, which marks the first meeting between the sides in six years
Read on for betting odds, a full preview and best bets for this opening match

Six years since their last meeting – a goalless friendly in Milan – Italy vs Germany are set to lock horns once again on Saturday, June 4th at 2:45 pm ET in the UEFA Nations League opener for both teams. As two superpowers of the world game, with a combined eight World Cups between them, the spectacle that takes place when Italy and Germany meet always has a special vibe.

And while Italy surprisingly failed to qualify for the World Cup for the second consecutive time, Germany – as ever – is one of the favorites in the World Cup odds ahead of the tournament this November.

Given that Germany enters the match on a nine-game unbeaten streak, while Italy has lost two of its last three – including a 3-0 throttling by Argentina in Wednesday’s Finalissima at Wembley Stadium – it’s not all that surprising that Die Mannschaft are slightly favored here. However, it’s going to be tight, with Germany at +138 to cover a spread of -0.5. In addition, goals are expected by the bookies, with Over 2.5 listed at -120, compared to -103 for the under.

Germany Firing On All Cylinders

Compared to their rival to the south, the Germans have barely paused for breath since exiting Euro 2020 (which took place in 2021) at the hands of England in the round-of-16. They have won eight of their last nine games, with the one blip being a 1-1 draw in a friendly with the Netherlands back in March. Although that was the lone match of the nine which pitted them against one of the world’s top-10 sides.

That run of success also included a 4-0 win at North Macedonia – who, for those who need reminding – famously eliminated Italy from the World Cup playoffs.

Joshua Kimmich on the Nations League and the stress of games after a long season: “For me personally I’m always happy to play for Germany, especially when it’s against such a big nation. I’m looking forward to the game vs Italy. I’m happy to be here” pic.twitter.com/ZU3BcM4D8B

After missing out on the World Cup finals once again – despite being the reigning European champions – Italy coach Roberto Mancini has signalled a changing of the guard within his squad. That was readily apparent on Wednesday, with the de facto continental championship between the champions of Europe and South America also acting as the final appearance for the Azzurri for long-serving defender Giorgio Chiellini.

So, just as he did Wednesday, Mancini is likely to be drafting in some fresh blood for this game, particularly with some of his older regulars resting up after suffering wear-and-tear injuries after their long domestic seasons.

Just prior to the 0-0 draw six years ago, the pair of titans also met in the quarter-finals at Euro 2016, a titanic tussle that was eventually settled in Germany’s favor following a marathon penalty shootout. In fact, the last time Italy defeated Germany was in the Euro 2012 semi-final, where two goals from Mario Balotelli swung the contest decisively in Italy’s favor.

But over their 35-match history, it is Italy that firmly holds the edge, with 15 wins to Germany’s eight, while there have also been 12 draws.

A game between Italy and Germany always features some of the world’s best players, so it’s impossible to decisively rule out one or the other, no matter what kind of form they might be in. And remember, losing to North Macedonia isn’t just an Italian thing – the Germans lost at home to them in a World Cup qualifier too. However, with Germany ramping up towards Qatar, and the team looking far more settled than the Azzurri, expect Die Mannschaft to roll to victory here.