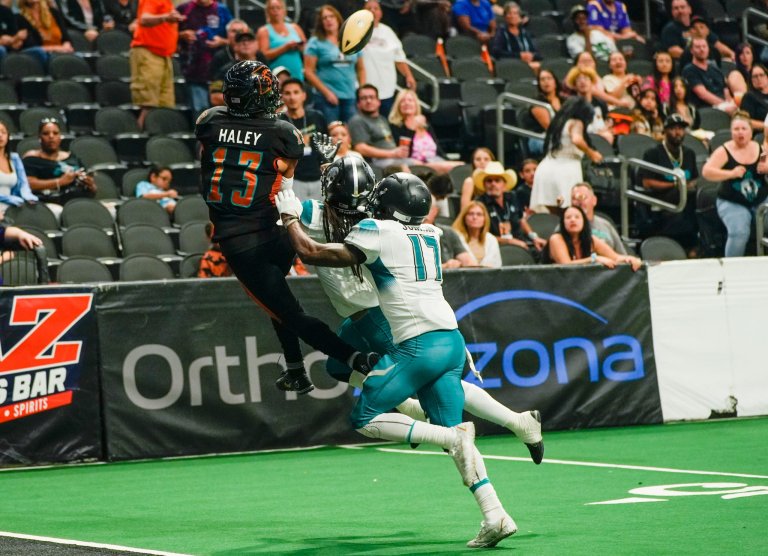 Arizona Rattlers wide receiver Braxton Haley (13) catches the ball during the first half of the Indoor Football League playoffs against the Duke City Gladiators at the Footprint Center in Phoenix on July 24, 2022.

The Frisco Fighters are 7-point home favorites over the Quad City Steamwheelers in one of two Indoor Football League semifinals on Friday, July 29
It’s the Arizona Rattlers who are the 6.5-point home chalk over the Northern Arizona Wranglers in the other semifinal on Saturday, July 30
Frisco (15-2) and Arizona (14-3) were the Indoor Football League’s top regular-season squads

All season long in the Indoor Football League, the Frisco Fighters (15-2) and Arizona Wranglers (14-3) have proven to be the best teams in the loop. That isn’t expected to change in this week’s IFL semifinals. Both are being listed as solid home favorites.

The Fighters are a 7-point pick over the Quad City Steamwheelers in their semifinal on Friday, July 29 at 5:05 pm ET. It’s an all-Arizona showdown in the other semifinal on Saturday, July 30. In this game, which kicks off at 6:05 pm ET, the Rattlers are the 6.5-point chalk over the visiting Northern Arizona Wranglers.

Both games are being broadcast on the IFL YouTube channel.

Frisco is at +280 to win the IFL championship. Bettors can access +600 odds on the Wranglers and a betting line of +1500 on the Steamwheelers.

The massive total on the Frisco-Quad City semifinal is warranted. The two regular-season meetings between the Fighters and Steamwheelers accounted for an average of 106.5 points per game.

Frisco absolutely crushed the Iowa Barnstormers 64-39 in the quarterfinals. It was the fourth time this season that the Fighters have topped 60 points in a game. TJ Edwards and Justin Rankin combined to rush for six touchdowns in the win. Wideout Jerminic Smith caught two TD passes. It was the 10th successive victory for the Fighters.

Quad City pulled the only upset of the quarterfinal round. The Steamwheelers edged the defending Indoor Football League champion Massachusetts Pirates 39-38 in overtime.

Quad City’s victory saw quarterback EJ Hilliard running for three touchdowns and passing for two more. In the extra session, both teams scored a TD. The difference on the scoreboard was a missed extra point by Pirates kicker Josh Gable.

The Steamwheelers enter the semifinals riding a three-game winning streak. Quad City is 5-1 straight up over the past six games.

Normally, stout defense isn’t the first thought that comes to mind in the wild and wacky world of the Indoor Football League. However, that’s exactly what will be on display in the Western Conference final.

The Rattlers flexed their muscles on both sides of the line of scrimmage in the quarterfinals. Arizona whipped the Duke City Gladiators 53-14. Northern Arizona outscored the Tucson Sugar Skulls 49-30.

In the final week of regular-season play, Duke City beat Northern Arizona 39-32. Two weeks earlier, it was Arizona dropping the Wranglers 40-28. Northern Arizona won 37-34 at home over the Rattlers on June 11. That’s Arizona’s only loss over the past eight games.