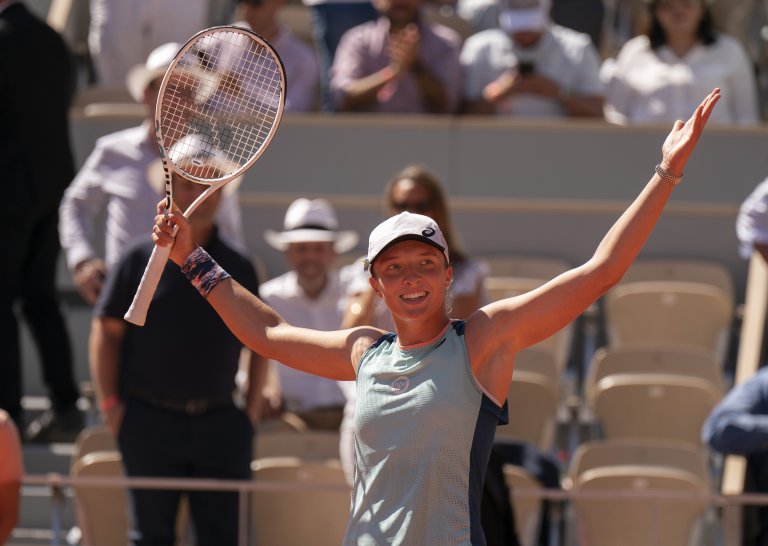 The finals of women’s singles play at the French Open will take place Saturday, June 4th
Iga Swiatek is looking to win her sixth title of the year
Continue below for odds, preview, and best bet analysis

And then there were two.

To no one’s surprise, Swiatek is one of the final two still standing at the French Open. Her opponent, Gauff, earned her spot in her first Grand Slam final after defeating Italy’s Martina Trevisan. Swiatek and Gauff are scheduled to take to the court Saturday, June 4th at 9 AM ET.

Odds as of June 3rd at DraftKings.

Swiatek is the heavy favorite to win the match, and capture her second title at Roland Garros. She’s been the favorite since the beginning, and her French Open odds have just continue to shorten as the tournament has gone on.

The World No. 1 is on a 34-match winning streak, and just won win away from not only capturing her second French Open title, but also tying Venus Williams’ 35-match win streak, that currently stands as the longest streak in the 21st century.

On route to the finals, Swiatek dropped one set. She lost the first send in the fourth round to Qinwen Zheng, but figured it out quickly to comeback and win 6(5)-7(7), 6-0, 6-2.

She most recently defeated Daria Kasatkina in the semifinals to book her spot on Saturday. She won 6-2, 6-1.

The 21-year old is 8-1 in final matches, and has yet to lose a set in a championship match in the past three years. On Saturday she’ll look to add to her already five titles won in 2022.

The 18-year old will try to be the first American woman to win the French Open since Serena Williams did so in 2015. But she’ll have a tough meeting against Swiatek.

On route to her first Slam final, Gauff has yet to drop a set, and has defeated the likes of Kaia Kanepi, Elise Mertens and Sloane Stephens.

Reaching a Grand Slam final in her favorite city at the age of 18 🙌@CocoGauff | #RolandGarrospic.twitter.com/B4PIha5cht

If there’s one thing that we’ve seen happen before, it’s a young teenager come out on top here at the French Open. That young teenager was 19-year old Swiatek in 2020, and Gauff’s run this year could easily be compared.

This will be the third time these two young superstars go head-to-head, and the second time this year. Their first matchup came in 2021 in the semifinals of the Italian Open, with their most recent meeting happening back in March of this year in the round of 16 at the Miami Open.

Is Swiatek the Best Bet Once Again?

The short answer is yes.

Despite just being 21-year olds, Swiatek does bring the experience in this matchup. Not only does she have the experience over Gauff, but she’s also the best in the world. Swiatek’s forehand is unstoppable at the moment.

But it’s fair to say that the present and the future of women’s tennis will be on display Saturday. Swiatek has handled the No. 1 spot with ease, and Gauff has shown time and time again that she’s not just your average teenager.

With that being said, it’ll be surprising if Swiatek doesn’t end up on top on Saturday, but don’t be surprised if Gauff is able to steal a set.

Want a 20% live profit boost at the French Open every day? Check out this BetRivers promo code to claim this bonus now! BetRivers Ontario is also now live in Canada as well!