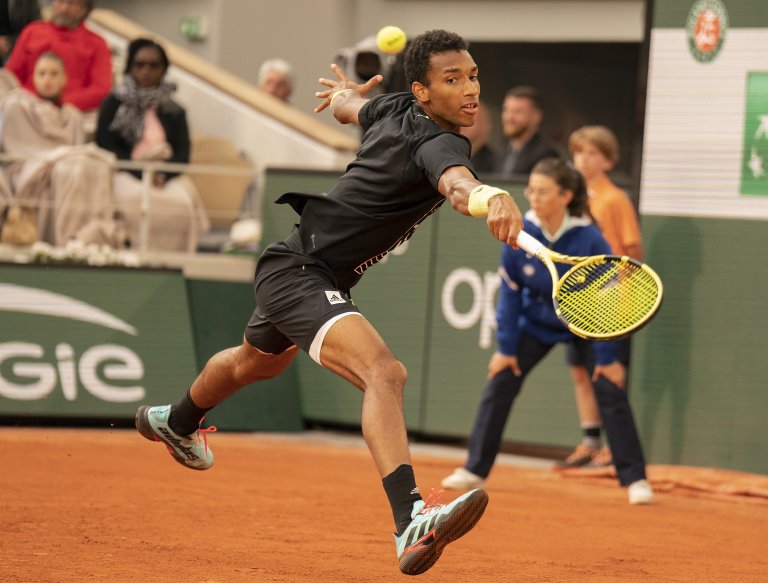 May 29, 2022; Paris, France; Felix Auger-Aliassime (CAN) returns a shot during his match against Rafael Nadal (ESP) on day eight of the French Open at Stade Roland-Garros. Mandatory Credit: Susan Mullane-USA TODAY Sports

Canada’s Felix Auger-Aliassime is a -175 favorite over Poland’s Hubert Hurkacz in the men’s singles quarterfinal match at the ATP Halle Open on Friday, June 17
Hurkacz defeated defending Halle Open champion Ugo Humbert in the Round of 16
All of the Hurkacz vs Auger-Aliassime odds, picks, predictions and best bets are assessed in the following story

Hubert Hurkacz is the next stumbling block in the path of Felix Auger-Aliassime’s quest and it must be stated that he is an imposing one.

Fourth-seeded in the Halle Open and situated #9 in the world in the ATP Tour rankings, Canadian Auger-Aliassime is in search of his first ATP tournament title on a grass-court surface. Last year, Hurkacz drove all the way to the semifinals of the most import grass-court event, the Grand Slam stop at Wimbledon.

To make matters even a bit more intriguing, the two players are also close friends.

Oddsmakers are siding with Canada in this match. It’s Auger-Aliassime who is being set at the -175 favorite to win this men’s singles quarterfinal match.

Odds as of June 16th at Caesars Sportsbook. Also check out these DraftKings Ontario bonsues

The match is set to get underway at 11:30 am ET on Friday, June 17. Viewing is available on the Tennis Channel.

In the Halle Open betting trends, Auger-Aliassime was set as the +750 fourth betting choice to win in the tournament’s opening betting lines. Hurkacz is opened at +1000 to be the winner in the Halle Open.

He never went to USC but it’s a safe bet to say that right now, Auger-Aliassime is quite popular with the Trojans faithful. His first two matches saw him post consecutive victories over former UCLA Bruins who’d also been NCAA champions.

Just keep on winning! [email protected] had to work hard in the first set, but he’s through to another quarter-final at the @ATPHalle. ?

In the opening set against McDonald, Auger-Aliassime staved off set point and then won the next two points to take the tiebreaker. From there, the Canadian took control of the match. He won the first six in a row and 16 of the first 17 points to open the second set. Auger-Aliassime finished off McDonald by winning the final six points of the match.

Auger-Aliassime committed 15 unforced errors during the match. However, he also smacked 15 aces and hit 41 winners.

The #5 seed in the Halle Open and #12 in the ATP world rankings, Hurkacz took out defending Halle Open champion Ugo Humbert of France 7-6(5), 6-3. Hurkacz served 10 aces and overcame his first-service struggles that saw the Pole win just 51% of his first-serve games.

Hurkacz downed Maxime Cressy 6-4, 4-6, 6-4 in opening-round action. Even with his run to the semifinals last year at Wimbledon, one of biggest tennis events of the year, Hurkacz is only 11-8 in his career when playing on grass courts.

Auger-Aliassime holds a 2-0 edge on Hurkacz in head-to-head meetings. He first beat the Polish player in straight sets at Miami in 2019.

This is the second time Hurkacz and Auger-Aliassime are meeting on the grass at the Halle Open. Last year, the Canadian again toppled Hurkacz in straight sets in the opening round of this event.

Last week in the opening tournament of his grass-court season at the Libema Open, Auger-Aliassime reached the semifinals before falling to eventual champion Tim van Rijthoven in three sets. Hurkacz, meanwhile, was toppled in the first round of his grass-court debut at Stuttgart by Martin Fucsovics.

Both of these players are outstanding grass court talents. Auger-Aliassime reached the quarterfinals at Wimbledon last year. This figures to be a hard-fought three-set affair. Auger-Aliassime’s consistency has been a touch better than Hurkacz and that should give him the slight edge.