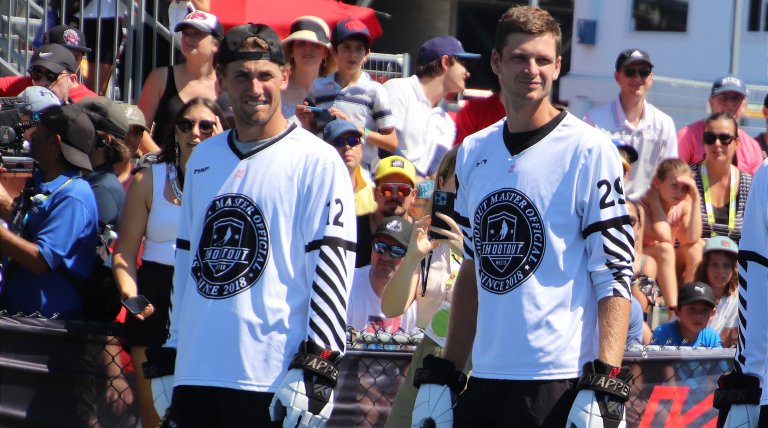 Hubert Hurkacz and Casper Ruud were teammates during a ball-hockey game against NHL players Saturday at the National Bank Open. Friday in the semifinals, they will be adversaries. (Photo: Stephanie Myles/Opencourt.ca)

The matchup was to be popcorn time, with hometown guy Félix Auger-Aliassime against Nick Kyrgios
Instead, the first National Bank Open semifinal (3pm ET) will feature Hubert Hurkacz vs Casper Ruud
Read on as we break down this matchup, the winner of which will be the heavy favorite in the final

It shouldn’t be a surprise that the No. 4 and no. 8 seeds have made it to the semifinals of a Masters 1000 tournament.

But from the top half of the National Bank Open draw, a draw decimated with early upsets, the fans’ hope was that it would be a clash between No. 6 seed Félix Auger-Aliassime – the hometown hero – and unseeded but dangerous Nick Kyrgios.

Because this is tennis, neither made the date.

Odds as of Aug. 13 at Barstool Sportsbook

After two noteworthy victories over players he’d had trouble with in the past, Montrealer Auger-Aliassime seemed poised to make a long run at home in a wide-open draw.

It didn’t work out that way on Friday afternoon, before a full house at Stade IGA that wanted only to cheer on his every move.

Instead, it began to feel more like a wake as it took until late in the second set for Auger-Aliassime, who has a big serve, to win his own serve for the first time.

The final score was 6-1, 6-2. It took just an hour and 14 minutes. Auger-Aliassime won just two of 15 points on his second serve, and was broken five times in all.

Ruud won 9-of-10 points when the rallies went nine shots or longer.

It was a clean kill.

It was evident from the start of Hurkacz vs Kyrgios that the Aussie had hit the physical wall after a lot of tennis the last two weeks.

So he tried to use his serve to squeeze himself out of a bind. And when he fought back to take the second set in a tiebreak, at least you knew he was full effort.

Kyrgios had 19 aces. But Hurkacz had 20. Hurkacz had just two double faults, while Kyrgios offered up eight.

Hurkacz also saved all six break-point opportunities against his serve.

The bathroom break Hurkacz took after the second set basically was the end of Kyrgios.

“I was feeling the abdominal a little bit before the match, my knees hurt. Obviously when … you stop playing for like five to 10 minutes, it doesn’t help your body. My body was so stiff after that, I couldn’t move properly. My abdominal was hurting. I was trying to stay moving, but I just stiffened up.”

He wasn’t complaining – it was perfectly within the rules. But it wasn’t very warm in Montreal Friday.

We’ve seen what happens when Hurkacz gets on a roll like this.

The Miami Open title was one result.

One thing working against him is a lot of doubles. He’ll have doubles duty again Saturday.

And the way the tournament is scheduled he’ll have the 3pm singles – but the doubles semifinal won’t be until after the night singles match and suitable rest for one of his opponents. It might be 11pm before he gets on court again.

Ruud will be super fresh. But he’ll be under a lot more pressure Saturday then he was against Auger-Aliassime. Hurkacz has one of the best serves out there.