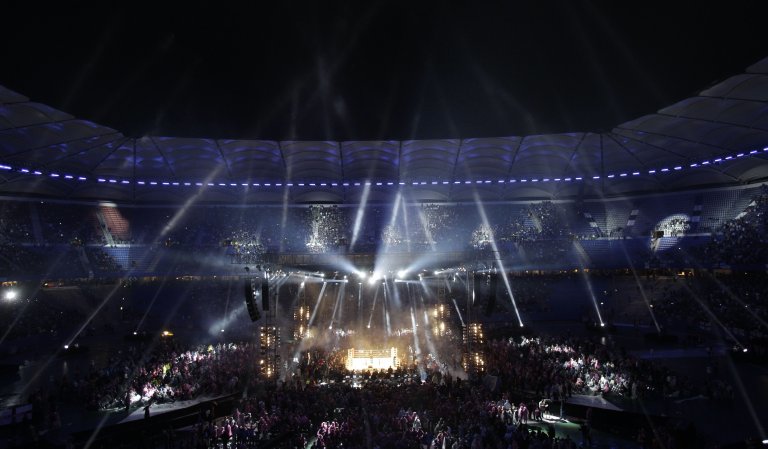 The boxing ring is illuminated prior to the heavyweight unification title fight between IBF, WBO, IBO world champion, Wladimir Klitschko of the Ukraine and WBA world champion David Haye of Britain in the stadium in Hamburg, Germany, Saturday, July 2, 2011. (AP Photo/Frank Augstein)

Hiroto Kyoguchi vs Esteban Bermudez goes Friday, June 10th, at 6:00 pm ET
Kyoguchi is highly favored to get it done here
Check out the Kyoguchi vs Bermudez odds, analysis, and predictions, below

Let’s analyze the Kyoguchi vs Bermudez odds via Bovada as we provide our best bet for the bout.

Odds as of June 7th.

This fight sees the WBA super champion take on the WBA regular champion at junior flyweight (Kyoguchi and Bermudez, respectively).

Kyoguchi’s Ring Magazine title is also up for grabs in this high-stakes affair.

Kyoguchi firmly established his hold on the gold in December 2018. He last fought in March 2021 and is now looking to notch his fourth championship defense throughout this tenure.

The two-division title holder has spent the better part of the last half-decade as some form of world champion and there’s a reason why Kyoguchi is favoured by oddsmakers.

The winner of this is likely to next test skills with WBO champ Elwin Soto. As inferred by Matchroom’s campaigning for Kyoguchi to be locked into that bout.

A ticket to a title unification bout hangs in the balance along with acquiring a valuable world title in the process.

This fight has been exactly one year in the making relative to when it was first ordered.

This is Kyoguchi’s first professional boxing bout in Mexico. While this is a dream for him, it could become a nightmare against Bermudez, who is well tenured on that circuit and has had some big career moments in Mexico.

Bermudez last bested an undefeated adversary to claim his hardware. This is good contextual detail as he enters this contest against Kyoguchi who has an unblemished pro record.

Also, his last fight saw him pull off one of the bigger upsets last year in the eyes of many pundits and fans. Can Bermudez repeat this feat over a divisional elite?

These 108-pounders match up pretty well on paper and there is a fair bit of pugilistic parity in this one.

This prizefight is scheduled for twelve rounds and I think there’s some value in pursuing a prop bet surrounding this one not going the distance.

Hiroto Kyoguchi vs. Esteban Bermudez Tale of the Tape

I favor the former in this Kyoguchi vs Bermudez clash. A prop bet on Kyoguchi winning via TKO or KO would present good value.

I see this going down in the later rounds and placing a prop bet on a 10-12 round grouping presents solid value.