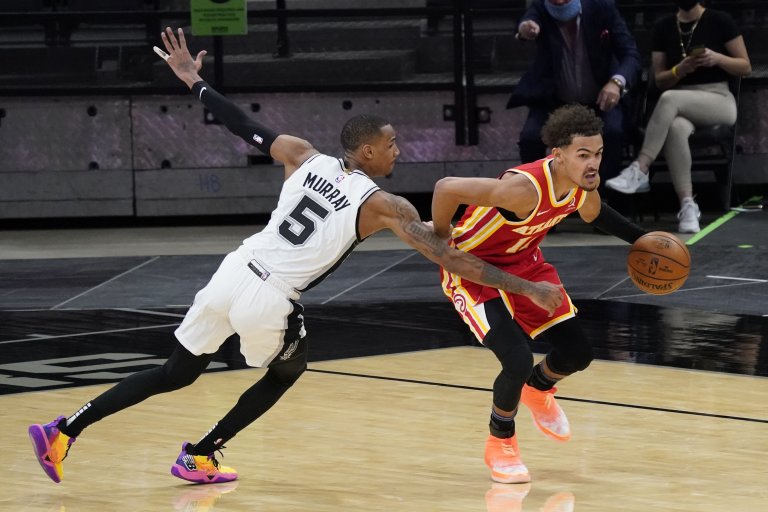 The Atlanta Hawks made a serious splash ahead of NBA Free Agency, acquiring Spurs star Dejounte Murray in a blockbuster trade on Wednesday
In the process, Hawks’ NBA Title odds have massively improved from +9000 to +5000 at FanDuel
Are the Hawks worth a bet for the 2023 NBA Championship? Read on for the analysis and best bet

After several days of speculation, San Antonio Spurs star Dejounte Murray finds himself in a new home. The Atlanta Hawks pulled off a blockbuster trade on Wednesday, acquiring the All-Star guard in exchange for Danilo Gallinari and multiple first-round picks, per Adrian Wojnarowski.

Adding another budding star to the mix alongside Trae Young has improved Atlanta’s NBA Championship Odds from +9000 a week ago to +5000 as of Thursday at FanDuel.

Odds as of June 30th at FanDuel.

Elite Backcourt for the Hawks

The Hawks undoubtedly needed to bring in some pieces and Murray is a tremendous addition. Young already voiced his desire to play alongside the former University of Washington standout and now, Atlanta possesses one of the most athletic and electrifying backcourts in the entire NBA.

Murray’s impressive handle and versatile skill set should fit perfectly with Trae. They’re both scorers and playmakers that will have no problem playing off each other and wreaking havoc in the Eastern Conference.

This ? just got real

Murray is coming off his best campaign yet, averaging 21.1 points, 9.2 assists, and 8.3 rebounds on 46% shooting from the field en route to making the All-Star Game. He’s the type of player who can truly do it all and he’s upped his production each and every season.

The 25-year-old is also a defensive cog on the other end of the floor thanks to his quickness and length. Atlanta doesn’t only need more scoring, but they need guys that can contain opposing stars. Murray is capable of just that and he’s a wizard when it comes to notching steals.

Although he’s not the greatest three-point shooter, Murray can play on and off the ball and loves to get downhill and attack. He will surely benefit from Young’s top-tier facilitating too, whether it’s as a cutter or a mid-range assassin.

Atlanta honestly didn’t have a legitimate weapon outside of Trae and that became so obvious in the playoffs when the defensive-minded Miami Heat absolutely stifled him. Now, the offensive burden doesn’t sit strictly on Young’s shoulders, which is huge. It’s less pressure on their franchise cornerstone.

Dejounte Murray will unlock a better version of Trae Young if Trae embraces playing off-ball with more effort in screen and handoff actions plus relocations within the flow of the offense. No more hands on knees resting at the logo. Young has it in him to be a constant threat.

It will be interesting to see if John Collins stays put or not after this trade. He’s been linked constantly with a move out of Atlanta, but the Spurs weren’t interested in his hefty $125 million contract. Although he is coming off a poor campaign, Collins could still potentially play a key part for this team in 2022-23 and serve as the third star.

Can Atlanta Contend For a Title?

Yes, the Hawks’ odds have improved in a big way. But, to say they can actually compete for a Larry O’Brien now might be a little bit premature at this point. The league is filled with so many good teams and the East in particular is extremely competitive.

Another run to the conference finals? I do believe that is a serious possibility. But I don’t think they’ll get past that.