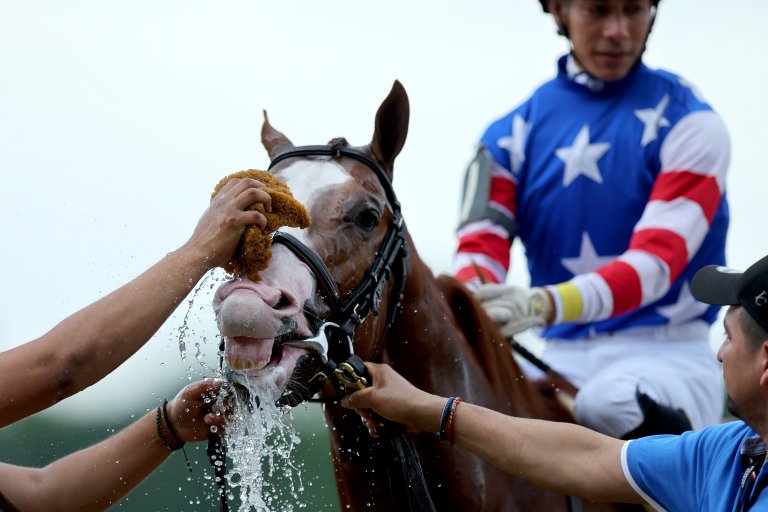 Saturday’s Haskell Stakes at Monmouth is the biggest three-year-old race since the Belmont Stakes
Unbeaten Jack Christopher is trying a two-turn race for the first time
Is there value betting against Jack Christopher, and opting for a horse who ran in the Triple Crown races?

For more than 50 years the biggest race of the year at Monmouth Park, the Haskell Stakes has been among the first major races for three-year-olds following the Triple Crown.

Last year, after winning the Kentucky Derby following the disqualification of Medina Spirit, Mandaloun took the Haskell after Hot Rod Charlie was DQ’ed. Maximum Security and Authentic, first across the line at Churchill Downs on the first Saturday in May, won the Haskell the previous two years.

Horse Racing 101 tells us that you want to bet on the fastest horse. However, this year at the Haskell, the quickest two equines are very lightly raced and untested.

How will Jack Christopher like racing around two turns for the first time? Is Taiba the horse we saw in March and April in California, or was the Kentucky Derby more indicative of his quality?

Let’s look carefully at a pretty deep edition of the Haskell with an eye toward betting value.

The $1 million Haskell is slated for 5:45 pm ET on Saturday. Temperatures are expected to be in the low 90s with minimal chance of precipitation. CNBC has television coverage.

Taiba was +580 at the Kentucky Derby after an unlikely road to Louisville. He didn’t debut until March, and then was the dominant winner of April’s Santa Anita Derby.

One of the least polished horses to ever run in the Kentucky Derby, Taiba was close to a suicidal pace early on, and really never had a chance. Trainer Bob Baffert was suspended for the Derby but has won the Haskell a record nine times.

Jack Christopher appeared on the road to the Triple Crown after two impressive victories last year. He got hurt and returned to the track winning impressively on the Derby undercard. Then he ran his rivals off the track on the Belmont undercard.

While Jack Christopher has run four times, and easily won on each occasion while facing strong competition, we simply don’t know what to expect going two turns. His longest race was one mile, and his breeding does not suggest long-distance races will be his best.

White Abarrio and Cyberknife were both right around +1500 at the Kentucky Derby. Neither ran great, but both have returned to show promise.

White Abarrio was 16th in the Run for the Roses while Cyberknife finished 18th. White Abarrio returned to finish second in the Ohio Derby. He won two key Derby prep races in Florida. As for Cyberknife, he won the Matt Winn Stakes at Churchill Downs on June 12. Cyberknife went to Louisville following his win in the Arkansas Derby.

Howling Time won his first two races last fall. After a mediocre effort in graded stakes in November, he returned to the track in March. Two Derby preps didn’t go well. However, he appears to have really matured and after winning at Churchill Downs on May 21, gave Cyberknife all he wanted last month.

If you like Cyberknife, there is little reason not to support Howling Time too. Both have far more good races than bad, and their best may put them in the mix.

Taiba and Jack Christopher are both mystery horses. Their upside is huge and the chances one of them is really special is pretty strong. Both are young and a little hard to trust too. At least Taiba has won around two turns. Having Baffert in your corner is very valuable too.