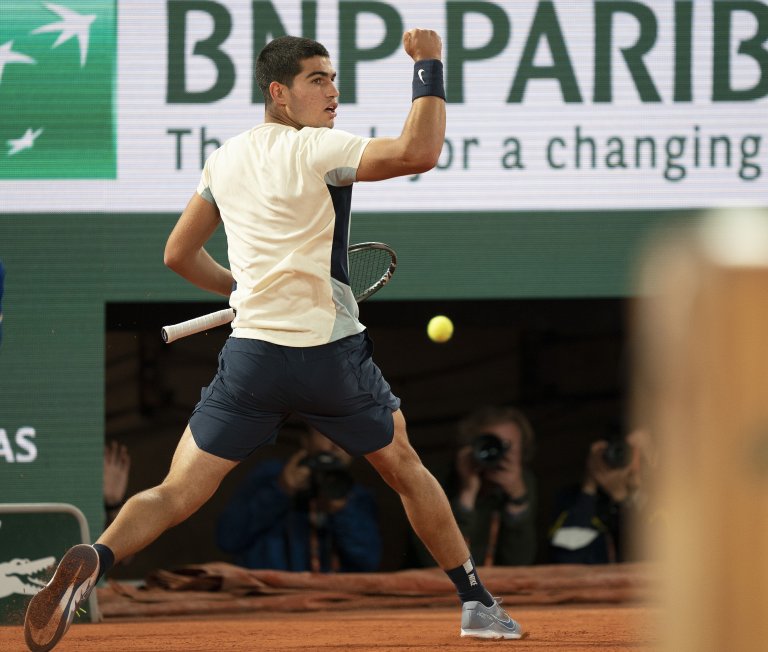 May 27, 2022; Paris, France; Carlos Alcaraz (ESP) reacts to a point during his match against Sebastian Korda (USA) on day six of the French Open at Stade Roland-Garros. Mandatory Credit: Susan Mullane-USA TODAY Sports

Upsets have abounded at the Hamburg Open, decimating the draw
No. 1 Carlos Alcaraz and No. 7 Karen Khachanov are the only seeds remaining
Read on as we break down the quarterfinals and make some predictions

The Hamburg European Open, an ATP 500 clay-court tournament slotted in between the grass-court season and the North American hard-court swing, is an outlier tournament prone to produce odd results.

Odds as of July 21 at Barstool Sportsbook

It’s a great opportunity for the players whose favorite surface is clay to amass some ranking points, typically.

But even that has not held true. The champions of the last four editions were in the field – 2021 champion Pablo Carreño Busta, 2020 winner Andrey Rublev and Nikoloz Basilashvili, who won it in 2018 and 2019.

None of them are in the final eight.

Neither is No. 3 seed Diego Schwartzman, who loves the clay. Neither is No. 8 seed Holger Rune, who built up his ranking to the top 30 on clay but was out in the first round.

No. 1 Carlos Alcaraz – by far the biggest favorite coming into the tournament – and No. 7 Karen Khachanov are the only two seeded players to make the quarterfinals. And, of course, they play each other.

Among the four quarterfinal clashes, there is a total of just two head-to-head meetings.

One of those was Alcaraz vs Khachanov, as they met in the fourth round at the French Open about six weeks ago.

Khachanov is fresher than Alcaraz, as he was banned from playing Wimbledon and so got a break to train.

So he’s likely to do better in Hamburg than he did in Paris.

Still, his opponent leads the ATP Tour with 22 wins on clay this season, tied with Casper Ruud, but with just two defeats to Ruud’s seven. He also leads the ATP with three clay-court titles: Rio de Janeiro, Barcelona and Madrid. That’s two 500s and a Masters 1000.

Both Khachanov and Alcaraz escaped their first-round matches in third-set tiebreaks, and had similar second-round wins.

Khachanov, who exactly three years ago was No. 8 in the world, hasn’t won a tournament since the 2018 Paris Masters indoors on a fast hard court back He has never won a title on clay, or even made a final.

Alcaraz practiced with Khachanov upon his arrival in Hamburg and did some promotional stuff with him, so there’s zero bad blood there.

We’re going with a popular tennis prop for matches that appear to be fairly routine.

Aslan Karatsev’s career arc has been outside the norm. And certainly, after his breakout in 2021, he’s been up and down in 2022 and is currently ranked No. 37.

And his clay-court record this year is so-so.

But he’s fresh – another player banned from Wimbledon. His opponent in Friday’s quarterfinal, Francisco Cerundolo, is the opposite of fresh.

Cerundolo won his first career ATP title last week in Bastad, Sweden, following up those five wins with two more in Hamburg this week. He beat a top-10 player in Casper Ruud last week. And on Thursday, he added another top-10 scalp with a surprisingly easy win over Andrey Rublev.

But he will hit the wall at some point; you would expect Karatsev to give full effort and know what he needs to improve from his 7-5, 6-1 loss to Cerundolo just a week ago in Bastad.

Karatsev will have to improve on winning first-serve return points, and be a lot better at winning his own first-serve points. He’ll need the quick strikes because he can’t stay with Cerundolo in enough rallies. But we’re going against the grain and calling for an upset.

Neither Davidovich Fokina nor Musetti dropped a set in their first two matches, with the Spaniard upsetting No. 5 seed Botic Van de Zandschulp in his opener, and Musetti upsetting No. 3 seed Diego Schwartzman in his.

We’re calling for Davidovich Fokina to make the final.

These are two intense players, but Davidovich, still just 23, has a little more experience and has displayed a little more determination than the younger Musetti.