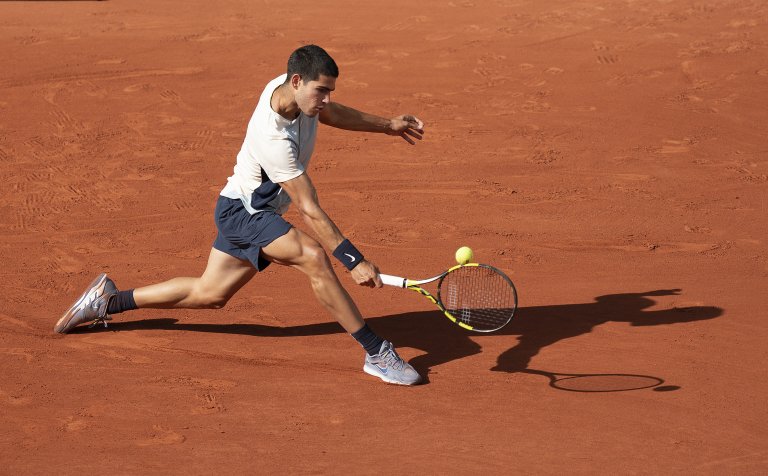 No. 1 seed Carlos Alcaraz is the strong favorite to win the Hamburg ATP 500
Alcaraz is one of two top-10, and four top-20 players in the draw
Read on for the Hamburg European Open first-round odds, matchups, and predictions

These few weeks between Wimbledon and the North American hardcourt season feature a return to clay.

With nearly all the participants in Hamburg of European (or South American) descent, they are opportunities for good clay-court players to earn points.

Odds as of July 17 at Caesars Sportsbook.

It’s understandable to see Andrey Rublev and Karen Khachanov in these draws; they were banned from Wimbledon and need some match time.

But it’s somewhat surprising to see Carlos Alcaraz, who would be expected to go deep in the upcoming Masters 1000s and the US Open.

Notably, the Spaniard (at least in practice) isn’t wearing the sleeve he wore at Wimbledon to protect his elbow.

Basilashvili is the seeded player, but Karatsev is the favorite in this matchup. The timing is nothing but ironic given investigative reporting in German media last week about both being connected to an alleged Belarussian match-fixer.

Both have denied any connection.

The irony of having Karatsev vs. Basilashvili 🤭 as a 1st round match in GERMANY. https://t.co/Ghsk1C25SE

It has been nearly eight years since the two met – and they have never met at the ATP Tour main-draw level. It’s the first time they’ve played outside Russia or Kazakhstan.

Notably, Basilashvili has won five of those six previous matchups; Karatsev’s one win came in the qualifying of the Moscow ATP tournament in 2014.

Neither is having a good season; Karatsev is 12-16; Basilashvili is 12-21 and retired during his first-round match in Bastad Sweden last week.

As much hype as the Dane, Rune, has gotten at age 19 and at a career high ranking of No. 28, it hasn’t been going well since his quarter-final effort at the French Open.

Rune, a grass neophyte, lost his opening match in all three of his events on that surface; he won just one set in all.

Not a surprise. But back on his favored clay last week, and near home in Sweden, the No. 7 seed lost in straight sets to qualifier Marc-Andrea Huesler in the first round.

Rune will be putting plenty of pressure on himself to pick up some points in Hamburg, as it’ll be more challenging once he gets to North America.

His change in circumstances from the young underdog to a top-30 player has been showing.

It’s the first meeting for these two; Tallon Griekspoor also is at a career-ranking, at No. 47. The Dutchman had a solid grass-court season; his clay results are marginally better overall during his ATP career.

Beyond the challenges the chair umpire will have calling this match, the seeded Van de Zandschulp is the slight underdog in this one.

Both have their best winning percentages on clay; Davidovich Fokina has had a lot more experience playing on it. But Van de Zandschulp has been more successful on it over the last 12 months.

The two played on grass just before Wimbledon, and in the second round of the 2021 French Open on clay.

And after winning the first two sets, Davidovich Fokina needed the full five sets to put the Dutchman away.

This tiebreaker in Hamburg sets up as a long one.