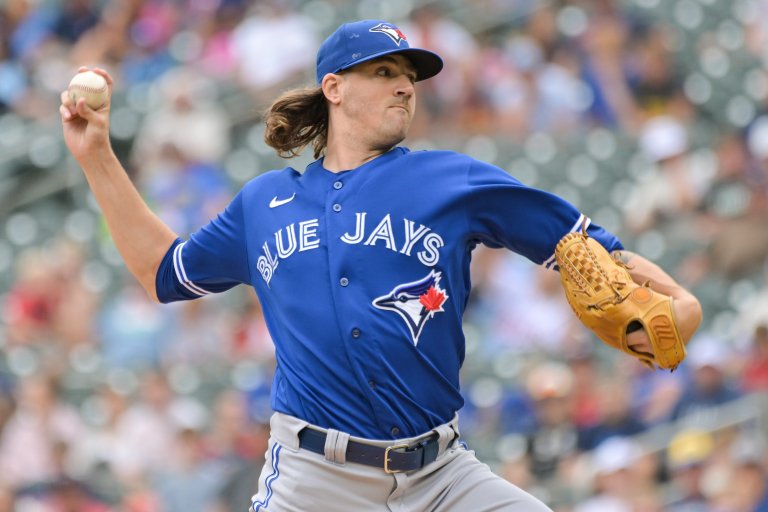 A pair of streaks were snapped on Saturday in the Blue Jays (61-51, 35-22 home) 2-1 victory over the Guardians (60-53, 31-31 away). The victory snapped Toronto’s three game losing streak, while the loss broke up Cleveland’s season-best six game winning streak.

These two playoff hopefuls will play the series finale of their three-game set on Sunday, in what projects to be an elite pitchers duel.

The Blue Jays opened up as -140 moneyline favorites, in a contest that features a total of 7.5. First pitch is scheduled for 1:37pm ET at Rogers Center in Toronto, Ontario, with clear skies and 78 degree temperatures in the forecast .

Shane Bieber and Kevin Gausman are two prime candidates for the argument that wins aren’t a true indication of how well a pitcher is performing. Both are top-eight contenders in the AL Cy Young odds, yet combined they have just 15 wins against 14 losses.

Gausman sports an 8-8 record overall, but ranks 16th in MLB in ERA and 12th in strikeouts. He’s held his opponents scoreless in back-to-back starts, shutting out both Minnesota and Tampa Bay.

Make it 14 straight scoreless innings for Kevin Gausman.#Bluejays up 2-0 to the 7th.

The 31-year-old has yielded just seven hits during those two outings, while posting a 15-to-1 strikeout-to-walk rate. He owns a career 2.27 ERA in six starts against the Guardians, and held them to a single run over 6.1 innings in his lone meeting versus them this season.

Bieber meanwhile, has a 7-6 record this season and is also coming off a shutout performance. He held Detroit scoreless over 7 innings on Tuesday, which marked the third-straight start he’s allowed two runs or less.

Shane Bieber has had an electric first 100 starts in Cleveland. pic.twitter.com/Wu1JnmZAQy

Bieber’s allowed just one run total in his last 14 road innings, posting 16 strikeouts against only two walks. He’s pitched well versus virtually everyone he’s faced this season except the Blue Jays. Toronto touched him up for seven runs and eight hits back in May over just 3.1 innings. Blue Jays batters are hitting .387 against him over 74 at-bats, with a .483 slugging percentage and .912 OPS.

Toronto is typically a lineup to fear but that hasn’t been the case this week. The team snapped a 16 inning scoreless drought in Saturday’s win, after getting shutout by the Guardians 8-0 in the series opener.

The Blue Jays are still missing George Springer due to an elbow issue and have scored four or fewer runs in eight of their past 11 games. They have a .237 batting average and .294 OBP over the past two weeks, which are .27 and .33 points lower respectively than their season-long marks.

Make it 22 games in a row for Vladimir Guerrero Jr.

He’s scorching it, too. All liners, so he’s not far from a homer streak. #BlueJays

One bright note has been the bat of Vladimir Guerrero Jr. The top-five AL MVP odds contender is currently riding a 22-game hitting streak, the longest active streak in MLB.

Toronto’s underachieving lineup plays directly to the strengths of the Guardians. Cleveland is averaging just 1.4 runs allowed per game over their last seven outings, and has posted a pair of shutouts during that stretch.

They have a +16 run differential over their past seven games, beating Houston twice and the Blue Jays once, two of the top-seven World Series odds contenders.

It’s rare that back-to-back games go under the total at Rogers Center. However, given the pitching matchup and the current form of the Blue Jays lineup, Sunday’s contest is a prime candidate to follow in the footsteps of Saturday’s 2-1 result.

Both Bieber and Gausman have been phenomenal recently and the Guardians have a knack for playing low scoring games. Eight of their past nine games have failed to eclipse the total, with seven of those eight contests reaching just seven runs or less.

Not to be outdone, four of Gausman’s last five starts have produced totals of seven runs or less, with the last two both coming in under six runs.