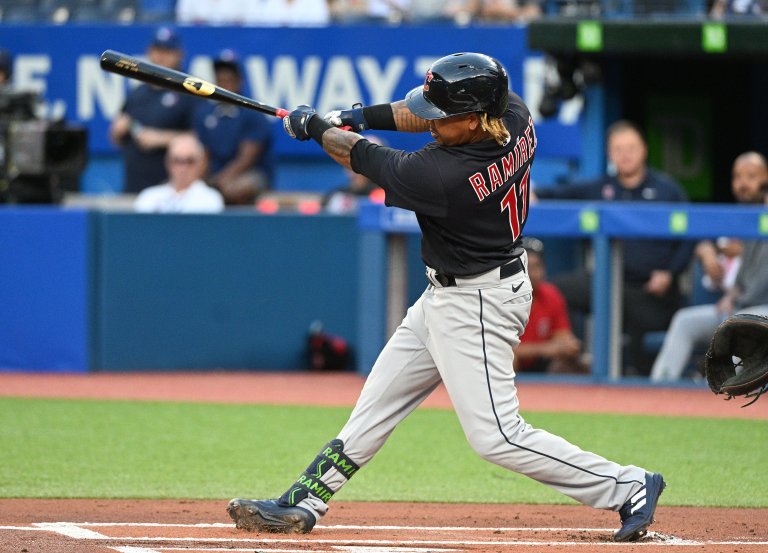 The Blue Jays host the Guardians on Saturday at Rogers Centre
Triston McKenzie (8-8, 3.16) will start for Cleveland against Mitch White (1-3, 3.86)
A look at the matchup and odds can be found below with a pick

The Cleveland Guardians will look to keep rolling when they visit the Toronto Blue Jays at 3:07pm ET Saturday in the middle game of a three-game series at Rogers Centre.

Odds as of Aug 13 at Caesars Sportsbook.

The Rogers Centre roof should be open with a high temperature of 81 degrees and sunny skies forecast.

McKenzie is 1-2 with a 3.43 ERA in his last three starts but coming off a sparkling outing in which he beat the Houston Astros, the AL West leaders, on Sunday in Cleveland. He pitched two-hit ball over eight scoreless innings while striking out eight and walking one.

In two career starts against the Blue Jays, McKenzie is 1-1 with a 3.46 ERA. His lone start in Toronto came last season when he allowed three runs in seven innings but wound up with a loss.

White will be making his second start for the Blue Jays since being acquired from the Los Angeles Dodgers in a trade.

White had a no-decision last Saturday against the Twins in Minnesota when he gave up three runs and six hits in 4.2 innings with two strikeouts and one walk. The Blue Jays eventually lost.

Including his time with the Dodgers, White is 0-2 with a 4.79 ERA in his last four starts.

White will be facing the Guardians for the first time in his career. This will also be his first time pitching at Rogers Centre.

None of the Guardians’ batters have faced White. The Blue Jays’ Bo Bichette has gone 3-for-6 with a double and a home run off McKenzie but Whit Merrifield is 3-for-19 (.158) with a homer.

Jose Ramirez hit a three-run home run and drove in four runs to lead the Guardians over the Blue Jays on Friday night. He finished 3-for-3 with a walk.

There are two people in the history of sports who have tortured the Toronto fan base the most:
+ José Ramírez
+ LeBron James#ForTheLand pic.twitter.com/BBGny3Fe5l

Amed Rosario hit a two-run single for the Guardians. Josh Naylor had a two-run homer among his two hits, Nolan Jones finished with three hits and Oscar Gonzalez also had two hits.

Guardians’ reliever James Karinchak did not make the trip as is he unvaccinated and barred from entering Canada. Right-hander Peyton Battenfield was called up from Triple-A Columbus.

The Blue Jays were blanked on three hits, though Vladimir Guerrero Jr. extended his hitting streak to 21 games. He was about the only person who had fun on Sitcom Night.

Having fun with our Friends on Sitcom Night! #NextLevel pic.twitter.com/g52FJs3SJY

The Guardians have won four of five from the Blue Jays this season and hold a 27-17 lead in the series since 2016, the same year Cleveland beat Toronto in the American League Championship Series.

White is a bit of a wild card, but we’ve got to ride with McKenzie in this matchup following his dominant outing last time out.