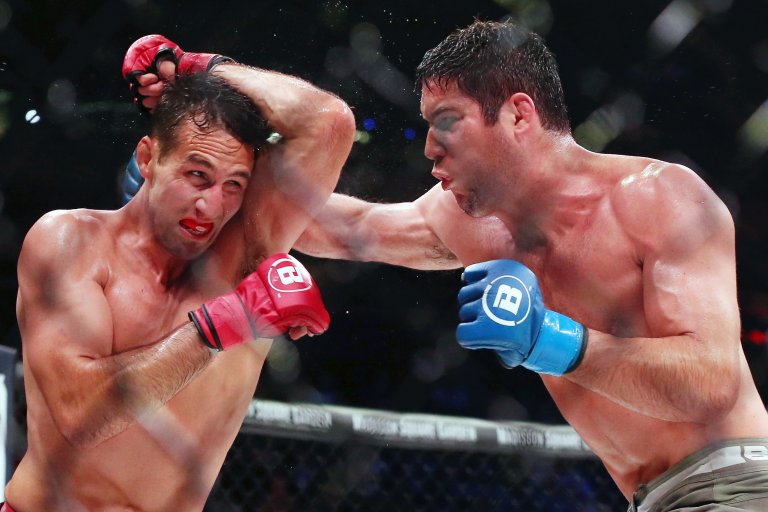 Neiman Gracie looks to avoid suffering consecutive defeats for the first time in his professional MMA career when he takes on newly minted welterweight Goiti Yamauchi in the main event at Bellator 284 on Friday August 12. The co-main event features a battle between top-ranked heavyweights Valentin Moldavsky and Steve Mowry.

Prelim action is scheduled to get underway at 6:00pm ET on Friday evening, with a live stream available on both YouTube and Pluto TV. The main card follows at 9:00pm ET, with all the action available on ShowTime.

Neiman Gracie is currently enduring the toughest struggles of his career after falling to defeat in three of his past five outings. Despite his current swoon, Gracie remains perched at No. 5 on the Bellator welterweight rankings.

Currently absent from the Bellator rankings, Goiti Yamauchi was victorious in his welterweight debut last time out at Bellator 279, tallying a first-round submission win over Levan Chokheli.

Neiman Gracie is on the rebound after coming out on the wrong end of a unanimous decision in a five-round main event clash with Logan Storley at Bellator 274. In addition to marking his third defeat in five outings, the loss also marked his third straight defeat in fights lasting more than 10 minutes.

Despite his recent woes, Gracie remains a threat in the cage, both standing and on the mat. Sporting a second-degree black belt in Brazilian Jiu-Jitsu, Gracie has developed a well-earned reputation as a dominant submission specialist, with nine of his 11 career wins coming by tap out.

While Gracie has just one KO/TKO win to his credit, he has demonstrated impressive striking ability, both against Storley and in his first-round TKO win over Mark Lemminger at Bellator 266.

Goiti Yamauchi needed just 3:49 to earn the win by submission over Levan Chokheli in his welterweight debut at Bellator 279. The victory marked the 29-year-old’s 20th career win inside five minutes, with 18 of those coming by submission.

Sad to hear that unfortunate thing changed the day…

Yamauchi’s reputation as a speedy finisher is countered by a lack of experience in championship rounds. Just nine of his 32 career fights have gone a full three rounds, with the Japanese native earning the win in just four of those contests.

Yamauchi’s move to the 170-pound division comes on the heels of his historical struggles to make weight. The former Iron FC featherweight champ, who has also fought as a lightweight, has missed weight three times since joining Bellator nine years ago.

Valentin Moldavsky aims to bounce back after suffering a controversial unanimous decision loss to Ryan Bader in his bid for the undisputed Bellator heavyweight title last time out at Bellator 273.

Great recovery by Moldavsky to keep Bader down in round 2. Relentless #Bellator273pic.twitter.com/2heesqtA4M

The defeat marked his first loss since joining Bellator five years ago. However, there is no doubting Moldavsky’s toughness in the cage, where he has gone the distance in six of seven outings. The 30-year-old has tallied just one KO win, but the former World Sambo champion is an impressive grappler with three first-round submission wins to his credit.

Undefeated in 10 pro fights, Steve Mowry is a rising star in the Bellator heavyweight rankings, where he is now perched at No. 5. The 30-year-old has finished opponents in all 10 of his wins, capped by a first-round submission win over Rakim Cleveland at Bellator 271.

Standing a towering six-feet eight-inches in height, Mowry moves extremely well for a big man. He has finished opponents inside five minutes on seven occasions, and is extremely comfortable taking the action to the mat, as evidenced by his six submission victories. However, Mowry’s lack of experience in protracted fights remains a big disadvantage versus Moldavsky.

Ilima-Lei MacFarlane (-148): The former Bellator women’s flyweight champion is coming off consecutive unanimous decision losses, but has experience on her side against Bruna Ellen
Gokhan Saricam (-162): Saricam is unbeaten in three outings since suffering his first career loss to Steve Mowry, including a pair of crushing first-round ground-and-pound wins.
Justine Kish (+170): Following her victory over MacFarlane at Bellator 279, Kish offers value as she seeks to avenge her unanimous decision loss to DeAnna Bennet just six months ago.