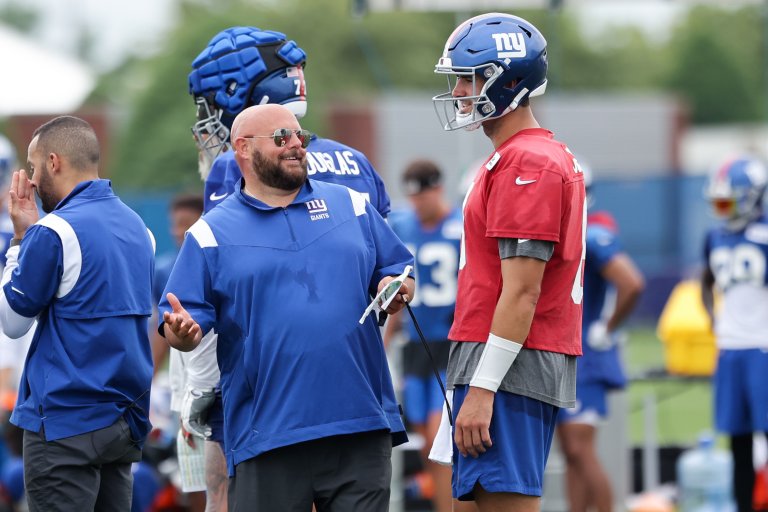 The Giants are 2.5-point road favorites over the Patriots in their preseason game Thursday night
The Patriots have gone 9-2 in the preseason over the past three years
A look at the matchup and odds can be found below with a pick

In the preseason opener for both teams, the New York Giants visit the New England Patriots at 7:00 pm ET Thursday at Gillette Stadium in Foxborough, Massachusetts.

The weather forecast calls for a 20% chance of showers. The temperature is expected to be 75 degrees at kickoff with a low of 67, calm wind and partly cloudy.

NFL Network will carry the game.

Odds as of August 10th at BetMGM

The Patriots opened as two-point favorites in the Giants vs Patriots odds, but the line has swung the other way and the Giants are now 2.5-point picks. New York has a 57.45% implied win probability as -135 choices on the moneyline.

Despite the shift in odds, 56% of the public money is being wagered on New England.

The Patriots went 3-0 in the preseason last season and 9-2 over the last three years. Furthermore, New England has a record of 49-36 in exhibition games under coach Bill Belichick.

Bill Belichick and the Patriots are gearing up for their first preseason game against the Giants on Thursday. #Patriots | https://t.co/nhCcwcvCXe pic.twitter.com/979iNaJvlo

The Giants have a first-year coach in Brian Daboll, who replaces the fired Joe Judge. Oddly enough, Judge is now back with the Patriots as the quarterbacks coach.

For what it’s worth, the Giants lost all three preseason games last year.

No Jones vs Jones

Those who have a jones for Giants quarterback Daniel Jones facing Patriots counterpart Mac Jones are going to be disappointed.

Mac Jones is not expected to play Thursday. Instead, backup Brian Hoyer and rookie Bailey Zappe will get the reps at QB.

The 36-year-old Hoyer has plenty of experience in The Patriot Way as he has played seven seasons in New England, though started only one regular-season game.

Hoyer appeared in five games for the Patriots in the regular season last year and completed 9 of 11 passes for 227 yards and one touchdown.

Zappe was the Patriots’ fourth-round draft this year. He had a phenomenal season in 2021 at Western Kentucky as he threw for 5.967 yards and 62 touchdowns.

Daniel Jones is expected to see limited action for the Giants, probably no more than two series. He will try to get acclimated to the new offense installed by Daboll, most recently the Buffalo Bills’ offensive coordinator.

Jones is struggling with the new system.

Here’s the All-22 angle of Xavier McKinney’s INT off Daniel Jones today — via his Instagram.

McKinney’s range is unreal, Jones prob did not think he’d be able to get there in time.

Tyrod Taylor, an 11-year veteran, is the Giants’ QB2 after starting five games for the Houston Texans last season. Third-stringer Davis Webb, who was drafted by the Giants in 2017 but has yet to throw a pass in a regular-season game, should also play a lot.

Giants tight end Ricky Seal-Jones and running Matt Brieda have not practiced this week because of undisclosed injuries and will not play. Neither will tight end Andre Miller (wrist) and cornerback Rodarius Williams (knee).

Patriots tight end Devin Asiasi has also been out with an undisclosed injury and will almost certainly miss the game.

Keep an eye on Montgomery

Wide receiver/running back Ty Montgomery has been making a strong impression during his first training camp with the Patriots.

Belichick is intrigued by the veteran’s versatility and Montgomery will likely see a lot of action so New England can evaluate how he fits into their offense.

Montgomery spent the past two seasons with the New Orleans Saints. He has also played for the Green Bay Packers, Baltimore Ravens and New York Jets during his seven-year career.

The Giants plan to play their starters briefly while most of the Patriots’ regulars won’t even see the field. Belichick’s teams have a knack for winning in August, though, and that makes the Patriots attractive as a home underdog.