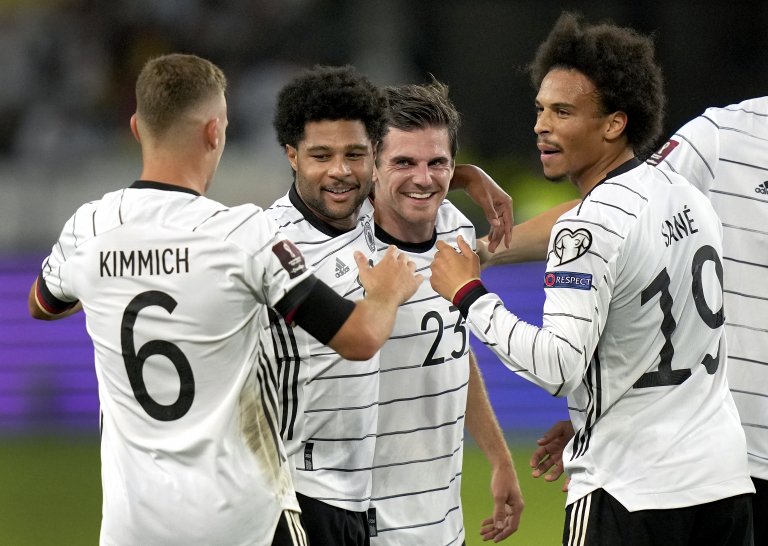 It’s Germany vs Italy on Tuesday, June 14 on Matchday 4 of the 2022-23 UEFA Nations League
Italy currently leads League A Group 3 but a win for Germany could take them top
We preview the game, look at Germany vs Italy odds, and offer some picks below

Both teams drew at the weekend and will be looking for a win to strengthen their position in League A Group 3 as they conclude a hectic few weeks of Nations League soccer. Italy currently leads the group while Germany is down in third.

We preview Germany vs Italy and offer below some analysis, team news, and picks for this huge Nations League clash.

Odds as of June 13 at Caesars Sportsbook.

If you’re relatively new to betting on this sport and want to know about Asian Handicaps and Pointspreads then our page offers help on how to bet on this game and other summer internationals.

Germany needs a win desperately if they are to qualify for next summer’s finals as group winners. Three consecutive draws have left them in third place, but it remains a very tight group and victory will take them top if Hungary fails to beat England.

Final training in Budapest before the team heads to Mönchengladbach ⚽#DieMannschaft #GERITA pic.twitter.com/Oe8ZLfODak

At the weekend, the Germans had to come back from a goal down early on to draw with Hungary in Budapest, with Jonas Hofmann equalizing for them in the ninth minute after they had fallen behind in the sixth. They failed to capitalize on having lots of possession but the draw did extend their unbeaten run to an impressive 12 games.

The points are shared at the Puskás Aréna.#DieMannschaft #HUNGER pic.twitter.com/BPKwbOYIKV

Win Needed if Germans Are to Top Group

With the group concluding in September – they play Hungary in Leipzig and then travel to Wembley to play England – the Germans are running out of chances of getting those vital wins on the board, so will be hoping to end their run of draws in front of what’s likely to be a boisterous Monchengladbach crowd.

In their favor, is a recent good record against the Italians against whom they are unbeaten in their last five meetings.

Despite winning last summer’s Euros, Roberto Mancini’s men failed to make it to Qatar 2022 after dramatically losing a playoff final 1-0 to North Macedonia. While Mancini stayed loyal to his ‘old guard’ during World Cup qualification, their failure to get to Qatar led to him overhauling the squad and bringing in a whole new bunch of talented youngsters.

Mancini’s new crop has performed admirably so far and to lead a group that also includes Germany and England at the halfway stage is, in itself, a positive sign.  Their 0-0 draw in Wolverhampton on Saturday against a strong England side was further evidence of a squad that may be inexperienced but is full of talent.

Such has been the turnover in players over the last few months, only two players who played for Italy in last summer’s Euro Final at Wembley started against England at the weekend.

This is the second time the Italians have met the Germans in 10 days, with the clash in Bologna ending 1-1, with Roma skipper Lorenzo Pellegrini giving the Italians a 70th-minute lead, which was negated just three minutes later with a goal from Joshua Kimmich.

Italy has done exceptionally well to lead this group and seems to be continually underestimated by the pundits and bookies. Also, this is a German team that’s almost forgotten how to win, so the value here is definitely with a low-scoring draw.