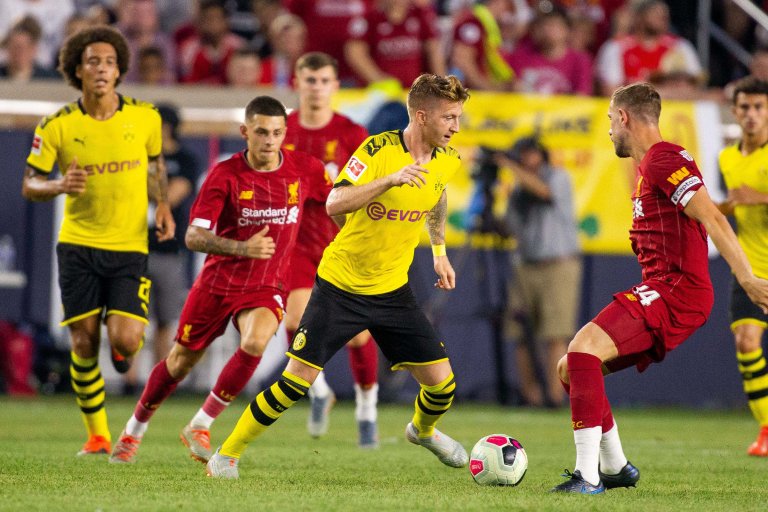 Freiburg hosts Borussia Dortmund in Round 2 of the Bundesliga on Friday, August 12th at 2:30 pm ET
Both teams enter this game at Stade Europa-Park off the back of opening-week victories
Read on for betting odds, a full preview and best bets for this Freiburg vs Borussia Dortmund match

It will be interesting to see how SC Freiburg can follow up its impressive 4-0 opening-weekend victory at Augsburg with Friday’s match against one of the Bundesliga’s usual heavyweights, Borussia Dortmund. Both teams kicked off their league campaigns in victorious fashion, with Dortmund, currently with the third-best Bundesliga odds, squeaking a 1-0 win over last year’s third-placed team, Bayer Leverkusen.

The two teams split last season’s matchups, with Dortmund winning 5-1 at home, while Freiburg triumphed 2-1 in the reverse fixture. And both also are a perfect 2-for-2 so far this season, with Freiburg registering a 2-1 win over FC Kaiserslautern in the opening round of the DFB Pokal – a tournament in which it reached the final last season – while Dortmund chalked up a 3-0 victory over 1860 Munich.

Odds as of August 11th at Caesars Sportsbook

While Freiburg may have enjoyed the more impressive season-opening victory, it is important to consider the opposition, with Dortmund beating a more talented squad in Leverkusen. However, injuries to some of Dortmund’s leading players, striker Sebastien Haller in particular, and possibly fellow forward Karim Adeyemi and former Bayern Munich defender Niclas Sule could make this game closer than it might otherwise be. The bookmakers are expecting goals, however, with Over 2.5 goals in soccer totals betting available for -170, versus +130 for the under.

Despite finishing sixth last season, Freiburg’s best finish since 2013, Christian Streich’s team scored just 58 goals, well back of the 85 netted by Dortmund, who themselves were somewhat shy of Bayern’s 97. So the four goals scored on opening weekend will be gratefully received by the club and fans, while Michael Gregoritsch, who scored nine times in the league for Augsburg, grabbed the opener and will be happy to have scored on his debut for his new club.

Japanese midfielder Ritsu Doan, meanwhile, wrapped up the scoring with the fourth of the afternoon as he also found the back of the net on his debut, so it will be interesting to see if the new blood continues to be so productive for Freiburg.

Who did you have in your #BLFantasy team on #MD1? pic.twitter.com/LBzJ7cmg5E

The proficiency of the 11 that Streich selected to open the season will likely mean that he goes with an unchanged lineup for Friday’s clash against Dortmund.

There is no such luck for Dortmund, who will have to wait and see on the fitness of Adeyemi, with the former Red Bull Salzburg forward picking up a foot injury after helping set up Marco Reus’s lone goal last weekend.

If he is unable to start, Thorgan Hazard is a likely replacement on the right wing. But Adeyemi’s potential absence is a blow nonetheless for a team that is looking to replace the 22 league goals that Erling Braut Haaland scored last year before leaving for England. With off-season addition Haller out indefinitely after his testicular cancer diagnosis, Anthony Modeste will be heavily relied upon having just joined Dortmund from FC Koln.

“Only Niklas Süle and Sebastien Haller are definitely out for Friday. Everyone else is hoping that they can play a role for Friday.”

With little to no selection headaches for Streich entering this fixture, expect Freiburg to carry the game to Dortmund, offering a lot of threat from set pieces, from which it scored two of its four goals on opening weekend. Freiburg will enter this game full of confidence, and given the fitness doubts that have likely given Dortmund coach Edin Terzic a few sleepless nights this week, it should pay off on Friday.