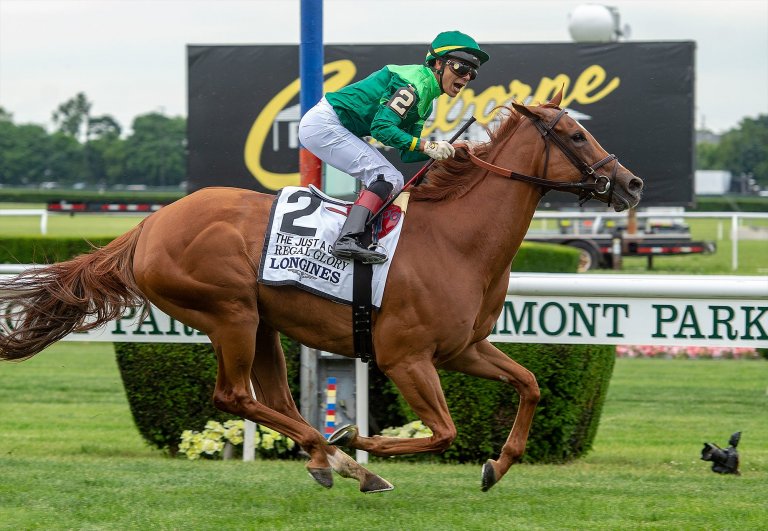 The $500,000 Longines Just a Game Stakes, (GR 1), for four year-old and up, fillies and mares going one mile over the turf at Belmont Park, on Saturday, June 11, 2022, was won by Chad Brown’s Regal Glory, as jockey Jose ortiz gives out a yell as he crosses the finish line..

Saturday’s Fourstardave Handicap at Saratoga has a short but high-end field
Case Creed seeks to give trainer Bill Mott a record fifth victory in the race
How can we make some cash in this Breeders Cup Win & You’re In Event?

Four of five horses in Saturday’s Fourstardave Handicap at Saratoga won their last race. Four of five entrants are graded stakes winners. All five have won races at today’s distance, a mile, and three have a victory at The Spa. So who will win this year’s edition?

The Fourstardave is a Breeders Cup Win & You’re in Event towards the BC Mile. We are now less than three months away from the World Championships at Keeneland. Breeders Cup Classic odds are out, and worth considering.

In the feature at the Spa Saturday, it’s Grade 1 winner’s Casa Creed and Regal Glory against Grade 2 champ Get Smokin, and Grade 3 victor Masen. Just for good cause, Front Run the Fed, a Grade 3 runner up is in the mix too.

Let’s go through the field and consider our betting options.

Odds as of August 12

The $500,000 Fourstardave has a post time of 6:13 pm ET. Temperatures are expected to be in the 70s with very little chance of precipitation. Fox Sports 2 has television coverage.

Trainer Bill Mott has won the Fourstardave a record four times. While Mott seeks number five with Casa Creed, fellow Hall of Famer Mark Casse can tie him at four if Get Smokin gets up. Chad Brown, the dominant turf trainer over the past decade has Regal Glory and Masen in pursuit of his first victory in this event.

Understanding horse racing bet types can be beneficial, particularly with a small field. Consider all the ways you can play and what will provide the highest ROI.

Before Mo Donegal won the Belmont Stakes this year, there was a tremendous day of high-end racing in New York. The fourth race of the afternoon featured five fillies and mares going a mile in the Just a Game Stakes.

Regal Glory made it four straight victories and has now earned over $2 million on the track. The six-year-old has 12 wins in 19 starts. She is three-for-three at Saratoga and is as consistent as they come against top rivals. She has three career Grade 1 wins. This is her first race against males.

A few hours after Regal Glory made up that enormous deficit to get to the winner’s circle, Casa Creed did likewise in the Jaipur Stakes.

The win was particularly impressive because it was Casa Creed’s first race since running twice in the Middle East. A winner of six career races and more than $1.4 million, recently he has been running in sprints. Five of his wins have come at under a mile, but he’s capable. He was a solid third in the Fourstardave last year.

Masen’s first six races took place in Ireland. He won three of them, was the favorite on a trio of occasions, and his last two races, both wins, were very impressive. He has been the chalk in all three of his races this year in the US, winning twice.

Losing by a neck on the Kentucky Derby undercard to the talented Shirls Speight is no crime. The two wins at Belmont are impressive. This field is closer to what he saw in Kentucky, but the lone four-year-old in the field running against elders might have upside on his side.

Get Smokin & Front Run the Fed are Viable

Front Run the Fed may prefer shorter distances, but not only has won going a mile, but he has also done so at Saratoga.

Sure, that race was in 2019, but since then Front Run the Fed has been in the mix consistently, won twice, and did so off the bench in July albeit against lesser horses in Virginia.

Get Smokin has not won in four tries at The Spa, but three of four career victories are at eight furlongs, and Casse has had success in this race.

He has been first or second in nine of 19 career races, and while this would be his best career victory, he should be the early leader, and if Masen doesn’t pressure him, he might get brave out front.

On paper, Regal Glory is in the best form but it is impossible to know how that will translate to running against boys. Casa Creed is terrific but really appears to prefer shorter races. Masen is the upside horse and Brown is the best trainer on grass. He should sit a perfect trip just behind Get Smokin, pounce, and be able to hold off the closers.