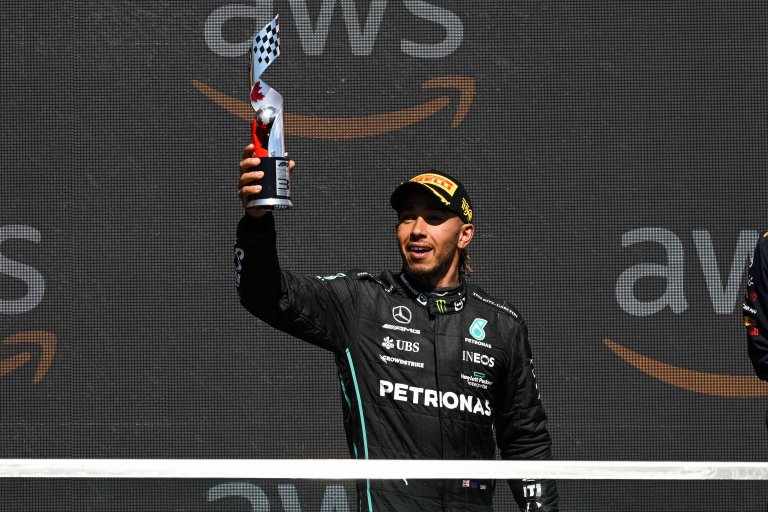 Lewis Hamilton trails favorites in bid for fourth straight British Grand Prix win
Max Verstappen tops the odds, just ahead of Ferrari’s Charles Leclerc
Read on for all the British Grand Prix odds and trends ahead of Sunday morning’s running at Silverstone Circuit

Lewis Hamilton vies for a fourth straight victory at the British Grand Prix as a vastly improved +900 bet in the Formula 1 odds. Fresh off his sixth win of the season in Montreal, Max Verstappen leads the way as a -105 favorite in the British Grand Prix odds, while Charles Leclerc trails as a +220 second favorite.

Here’s a look at all the odds and trends ahead of Sunday morning’s running of the 2022 British Grand Prix at 10:00am ET at Silverstone Circuit.

Mercedes Hopes to Benefit from Upgrades

With Mercedes struggling to keep pace with front runners Red Bull and Ferrari, Lewis Hamilton has been a non-factor so far in the race for this year’s F1 Drivers title. However, with the German automaker expected to make significant technical upgrades this weekend, Hamilton will be aiming to close the gap at the scene of some of the best performances of his illustrious career.

F1: Mercedes bringing big upgrades for British GP – https://t.co/J62rrUOwM6
Lewis Hamilton and George Russell will benefit from upgrades to their Mercedes cars at the upcoming British Grand Prix.
The Silver Arrows have failed to challenge for race wins this season, as their c… pic.twitter.com/CxWh5bXbEY

With victories in each of the past three editions of the British Grand Prix, Hamilton has now reached the podium at his home race in each of the past eight years, and 11 times in his career. Along with technical upgrades, Hamilton should enjoy the benefit of driving on the smooth track at Silverstone, thereby diminishing the porpoising issues he has faced in recent road races in Montreal, Monte Carlo, and Miami.

Verstappen Running Away with Drivers Title?

Now leading the way in the F1 Drivers Standings, 46 points up on teammate Sergio Perez, who surprisingly sits in second place, Max Verstappen is coming off a sensational performance in Montreal. The defending champion dominated in both qualifying and on race day. However, glory has eluded him at the British Grand Prix. Verstappen has reached the podium just twice in seven appearances, and was forced out of last year’s race after taking the pole position due to a serious accident caused by Hamilton.

Following a post-race penalty in Canada, the tables look like this#CanadianGP #F1 pic.twitter.com/Qglw1xz0CB

As for Perez, he has plenty of work to do to rebound from a disappointing weekend in Montreal, where he struggled to find pace before being forced to retire from the race due to technical problems. “Checo” had been enjoying a breakthrough campaign, with five top two finishes, including a win in Monaco. However, a shaky track record at Silverstone, where he has finished in the points in just five of 11 career appearances, tempers the value of his -110 odds to reach the podium again on Sunday.

Hampered by technical issues and plain old bad luck, Ferrari bit the bullet in Montreal, and opted for upgrades that forced the talented Monte Carlo native to start from the back of the back. However, Leclerc enjoyed a steady, drama-free drive in Canada with a fifth-place finish.

Leclerc did quite an amazing comeback in Montreal yesterday 👏 What did you think of his performance? 💬⁠
⁠#F1 #CanadianGP #Ferrari #Motorsport pic.twitter.com/XFYbnIw1kW

Leclerc remains well off the pace in both the F1 Drivers Standings and F1 championship futures. But after reaching podium in each of his past three appearances, Leclerc cannot be overlooked as a high-value +250 bet to both seize the pole position and win this race for the first time.

Lewis Hamilton has captured the spotlight in F1’s return to Silverstone, but the British Grand Prix also represents a homecoming for his Silver Arrows teammate George Russell and McLaren’s Lando Norris.

While Russell has yet to claim victory during his debut campaign with Mercedes, he has emerged as the most consistent driver on the circuit this season, and the only driver to finish top five in all nine races to date. Accordingly, he deserves consideration as a +200 bet to reach the podium for the third time in five outings and the fourth time this season.

Lando Norris would have finished P3 in Silverstone if it wasn’t for a slow pitstop in 2021. Unironically last year he was 39 points ahead of Leclerc in similarly paced cars.

Get him a top car and he will win races and challenge top drivers. pic.twitter.com/JkuBkXJBVk

Things have not gone so well for Norris, who is coming off a 15th-place performance in Montreal, and has reached the podium just once this season. Not surprisingly, Norris is pegged as a distant +10000 bet to become the first British driver on a British team to win the British Grand Prix since Hamilton turned the trick in 2008. However, with a pair of top six finishes at this race to his credit, Norris offers as a +110 bet to finish among the top siox this time around.