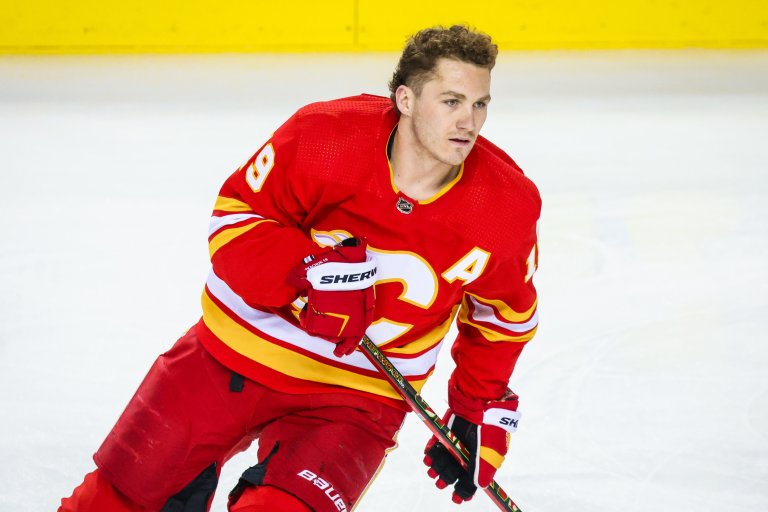 May 5, 2022; Calgary, Alberta, CAN; Calgary Flames left wing Matthew Tkachuk (19) skates during the warm-up period against the Dallas Stars in game two of the first round of the 2022 Stanley Cup Playoffs at Scotiabank Saddledome. Mandatory Credit: Sergei Belski-USA TODAY Sports

The Calgary Flames traded Mathew Tkachuk to the Florida Panthers in exchange for Jonathan Huberdeau and more
The Panthers saw immediate improvement in their Stanley Cup odds, while the Flames remained longshots
Read below for the latest Stanley Cup odds, plus betting analysis on the blockbuster trade

The NHL featured a blockbuster trade on Friday night. The Calgary Flames traded Mathew Tkachuk to the Florida Panthers in exchange for Jonathan Huberdeau, MacKenzie Weager, Cole Schwindt and a first-round draft pick.

Oddsmakers viewed the deal as a win for Florida, as the Panthers saw immediate improvement in their Stanley Cup odds following the transaction. The Flames, meanwhile, remain Cup longshots after previously losing superstar Johnny Gaudreau to NHL free agency.

Let’s take a look at the updated Stanley Cup odds and analyze the Tkachuk-Huberdeau trade from a betting perspective.

Odds as of July 22 at FanDuel Sportsbook.

The Flames traded Matthew Tkachuk to the Panthers on Friday night in a blockbuster deal. Tkachuk trade rumors had picked up over the past few days after the Flames’ agitator told Calgary management he wouldn’t be re-signing long-term.

WE HAVE A TRADE TO ANNOUNCE!

The #Flames have acquired Jonathan Huberdeau, MacKenzie Weegar, Cole Schwindt, and a conditional 2025 first-round pick from the Florida Panthers!

While Tkachuk being traded isn’t all that surprising, his new destination is a bit of a shock. Tkachuk was born and raised in St. Louis, so there was growing speculation that the 25-year-old was eyeing a return to his hometown.

It’s tough for Calgary to move on from Tkachuk, but the return they landed is pretty stellar. Jonathan Huberdeau finished second in NHL scoring last season (115 pts), while MacKenzie Weager put up 44 points and a plus-40 rating on Florida’s blueline.

Oddsmakers quickly adjusted the Stanley Cup odds following the Tkachuk to Florida trade. The Panthers got a decent bump, moving from +1300 to +1100 at FanDuel.  DraftKings even lists Florida (+850) as the second-favorite alongside Toronto.

Calgary’s Stanley Cup odds stayed put at around +2000 despite acquiring a superstar in Huberdeau. The Flames already faded from +1800 after superstar Johhny Gaudreau chose to sign with Columbus in NHL Free Agency.

The Flames did acquire a tremendous package for Tkachuk, but oddsmakers are skeptical considering the team lost their two stars in one offseason. It also doesn’t help that they were dominated by Edmonton in the NHL Playoffs.

The Panthers and Flames trade is the definition of a blockbuster, but it didn’t have a similar seismic impact on the Stanley Cup odds. There are two superstars in this trade in Tkachuk and Huberdeau, who are both listed in the 2023 Hart Trophy odds.

When you consider the two big pieces in this trade, it’s easy to see why the betting odds didn’t shift drastically for either team. Tkachuk does bring a little extra to the table with his agitating play style, which is likely factored into the 2023 Stanley Cup odds.

While the Panthers come out on top based on the betting odds, there’s no need to rush to make a wager. Florida’s issues last season revolved around defense, and losing Weager is a big hit to their blueline. They also lost two-way forward Claude Giroux to free agency.

Instead of betting the Panthers to win the Cup, you’re better off taking them at +550 to win the Eastern Conference. Florida has been a great regular-season team, but they’ve only won one playoff series this decade. Trading for Tkachuk won’t magically make all their defensive issues go away.